Last night, in Game One of the ALCS, the Yankees were unable to solve Dallas Keuchel en route to 2-1 loss. The good news: the Yankees were overwhelmed by Keuchel and still made it a very close game. The bad news: the Yankees lost and are now down 0-1 in the ALCS. I know they came back from down 0-2 against the Indians, but they don’t want to make a habit of having to come back in series.

On the mound for the Astros in Game Two this afternoon will be former Tigers ace Justin Verlander, who came over in an August 31st trade, literally minutes before the deadline to add players and have them be postseason eligible. Overall, Verlander had a 3.36 ERA (3.84 FIP) in 206 innings this season, including a 1.06 ERA (2.09 FIP) in five starts and 34 innings with Houston. His strikeout (25.8%), walk (8.5%), and grounder (33.5%) rates were typical Verlander. He’s always been a weak fly ball/pop-up guy. Not a ground ball pitcher.

Verlander is starting Game Two of the ALCS rather than Game One because he came out of the bullpen in Game Four of the ALDS on Monday. It was his first career relief appearance. He never pitched out of the bullpen in college or the minors. Verlander threw 40 pitches in 2.2 innings in that relief appearance, and will be on regular rest this afternoon. Let’s take a look at the former Cy Young winner, shall we?

Verlander has been around a while and he has a history with most of the Yankees, though, weirdly, he did not face them at all this season. The Yankees missed him during both regular season series against the Tigers, and by time he was traded to Houston, the Yankees were already done playing the Astros.

Huh. Well how about that. Verlander has only faced seven Yankees currently on the ALCS roster within the last three years. He’s never faced Aaron Judge or Gary Sanchez. The head-to-head numbers in the table are pretty top heavy — all of the success is tied up in four players — but that’s fine. If nothing else, maybe the recent history makes the Yankees feel more confident going into Game Two tonight.

In his Game One start against the Red Sox, Verlander allowed two runs on six hits and two walks in six innings, striking out three. A good performance but not a dominant performance. He did allow a two-run home run in his 2.2 innings relief appearance in Game Four. Weirdly, he walked two and did not strike out a batter in that game.

A few years ago it looked like Verlander was losing it. His fastball was trending down and after years of throwing 220+ innings a season, it was understandable. It happens to everyone. Then Verlander’s stuff bounced back — his velocity isn’t all the way back, but it is close — and he went back to being a bonafide ace. Go figure.

Here is Verlander’s average velocity over the years, via Brooks Baseball. It’s not often you see a pitcher over 30 lose velocity, then regain it all of a sudden. At least not without there being an injury involved. 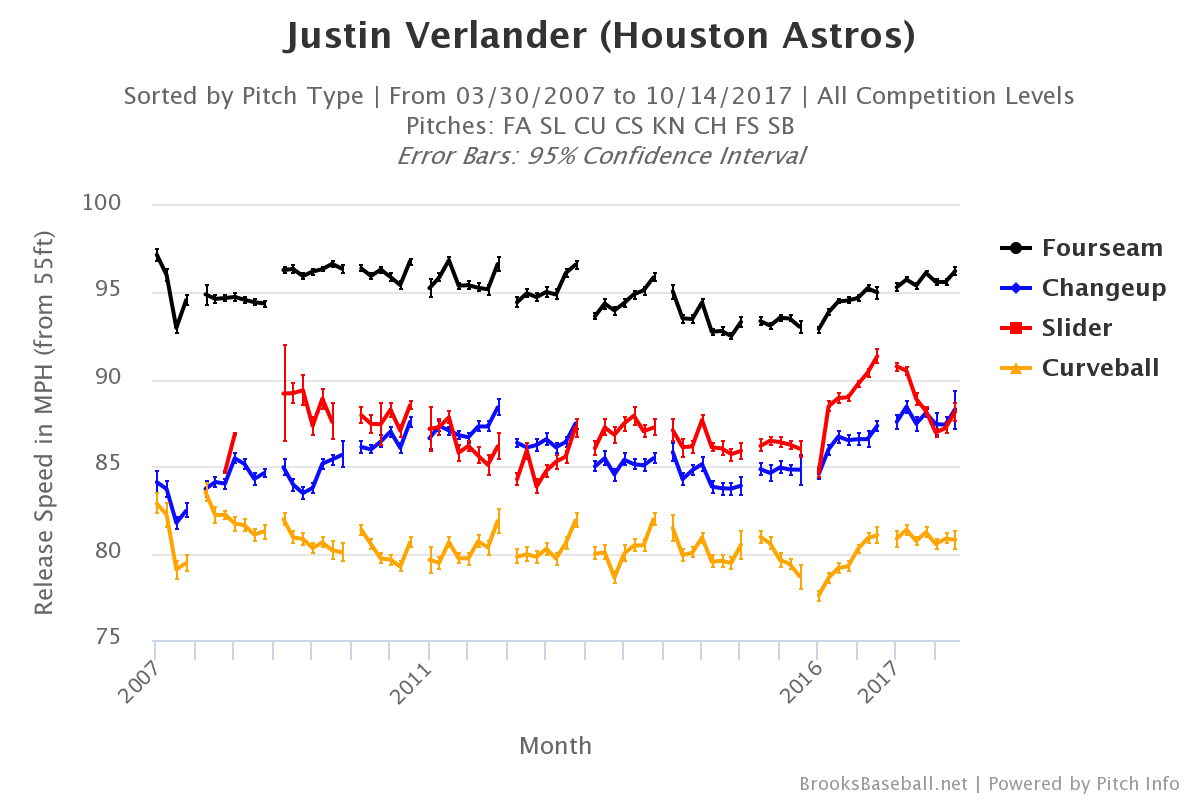 These days Verlander’s fastball will sit in the 94-97 mph range and touch 99 mph. His days of hitting 100 mph each and every time out are pretty much over, though 99 mph is still plenty good. And besides, with postseason adrenaline, I wouldn’t be surprised to see 100 mph at some point today. Verlander’s secondary stuff is as good as ever. He still has that great overhand curveball, as well as a quality slider and changeup. Even at age 34, Verlander still brings some of the best raw stuff in baseball to the mound.

Here, via Brooks Baseball, is Verlander’s pitch selection against righties and lefties: 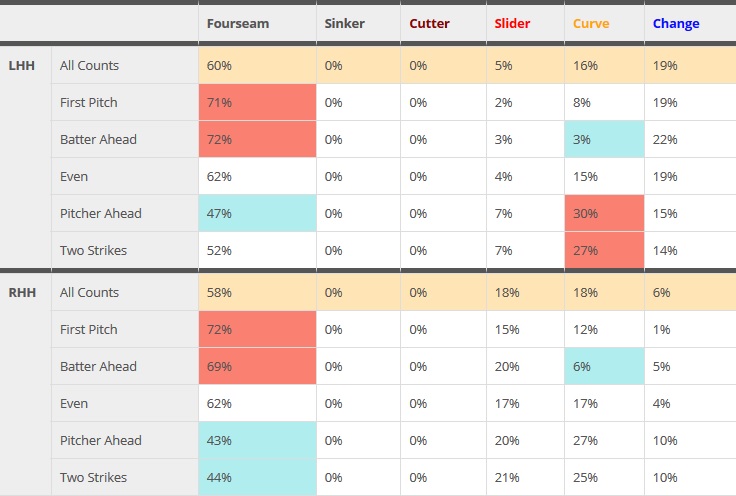 When you throw in the mid-to-upper-90s for 100+ pitches a game, why not lean on your fastball? Verlander sure does. Also, the fact Verlander has two quality breaking balls makes it awfully tough to zero in at the plate. You can’t go up there and sit fastball-slider as a righty or fastball-changeup as a lefty. The curveball is an equalizer. He can and will use it at pretty much any time.

If you’re reading this, chances are you’ve seen Verlander before, so perhaps embedding a video is a waste of time. I’m going to do it anyway. Here is every pitch from Verlander’s Opening Day start against the White Sox. He allowed two runs in 6.2 innings.

It seems counterintuitive, because you want to get his pitch count up as quickly as possible, but being aggressive and swinging early in the count is a good strategy against Verlander. He throws a ton of fastballs early in the count, and you don’t want to fall behind and have to deal with that nasty breaking stuff. Plus you know Verlander is going to end up throwing 100-something pitches and getting the ball into the sixth inning away. If he throws a fastball over the plate on the first or second pitch, swing away. You might not get anything to hit otherwise.

Fundamentally, Verlander is the same pitcher this year as the last few years. Yeah, he’s lost a little velocity and maybe some movement as well due to normal age-related decline, but there is no glaring reason that would explain the sudden platoon split. It’s not like his changeup suddenly went from great to terrible. I suspect this is a one-year blip and sample size noise more than an actual change to Verlander’s skills.

Yes indeed. Not only do the Astros have terrible throwing catchers, but runners also went 9-for-10 stealing bases against Verlander during the regular season. All while he was with the Tigers, weirdly. No one tried to steal against him following the trade to Houston. Verlander has a history of allowing stolen bases because he’s a big guy with a slower than usual delivery to the plate, even from the stretch. The Yankees can and should run against him.

This is not the Cy Young and MVP winning Justin Verlander of old. He’s still very, very good though. Verlander, as always, will be a difficult assignment. He is not going to get serious Hall of Fame consideration by accident. If he gives you a fastball in the zone, you better hit it, because his secondary pitches are damn near untouchable.

Thoughts prior to Game Two of the 2017 ALCS
2017 ALCS Game Two: Yankees at Astros