Three days ago, when Indians manager Terry Francona announced Corey Kluber would start Game Two of the ALDS rather than Game One, it seemed … questionable. Kluber is arguably the best pitcher in the league and you’d think they’d want to go with their best to start the series to try to get a quick lead. Instead, Trevor Bauer got the ball so Kluber could start Game Two and potentially Game Five on normal rest.

Now, following Game One, that move looks genius. Bauer was masterful in Game One last night, holding the Yankees to two hits in 6.2 innings, and the Indians now have a shot to take a two games to none series lead with Kluber on the mound this afternoon. The Yankees are in trouble. There’s no sugarcoating it. Kluber threw 203.2 innings with a 2.25 ERA (2.50 FIP) and hysterical strikeout (34.1%) and walk (4.6%) rates during the regular season. He’s a monster.

Of course, Kluber can be beat. He took four losses during the regular season and 13 times in his 29 starts he exited the game with the score tied or the Indians trailing. On three other occasions the Indians had a one-run lead when Kluber was pulled. Those are winnable games! The Yankees are probably going to need to employ the old Pedro Martinez strategy to win tonight — wait out Kluber and beat the bullpen. Let’s look at the Indians’ ace.

Tonight will be Kluber’s eighth career start against the Yankees, and in those eight starts he has a 1.80 ERA (2.60 FIP) with a .185/.225/.326 batting line against in 50 innings. That includes two starts this season, in which he allowed three runs in 17 total innings. Kluber has thoroughly dominated the Yankees in his career.

Players currently on the Yankees’ ALDS roster have hit a combined .155/.204/.250 with a 28.0% strikeout rate in 157 career plate appearances against Kluber. That dates all the way back to his rookie season in 2011, however, before he went from Corey Kluber to Corey effin’ Kluber. Here’s how the Yankees have fared against Kluber the last three seasons, via Baseball Reference:

Now here’s how Yankees on the ALDS roster have fared against Kluber the last three seasons in meme form:

Noticeably absent from that table: Aaron Judge. He did not play in either of Kluber’s two starts against the Yankees this season, nor did he face him last year. Going into a postseason game having never seen Kluber is also not great, Bob.

There are not too many pitchers in baseball who can match Kluber’s stuff. He is a five-pitch pitcher, though his straight four-seam fastball and fading changeup are distant fourth and fifth pitches. The sinker, slider, and cutter are his main three pitches. Here’s how one player described Kluber to Joel Sherman recently:

One frequent opponent likened Kluber to vintage Roy Halladay because “There is nothing straight. He doesn’t throw many four-seam fastballs. The ball darts both ways, and he is so precise that he can pitch to the quarter of the plate. You won’t get much over the middle of the plate. His cutter is so deceptive that guys come back over and over to the dugout saying they were right on the pitch, and then it was off their sweet spot.”

Here, via Brooks Baseball, is Kluber’s pitch selection against right-handed and left-handed batters during the regular season: 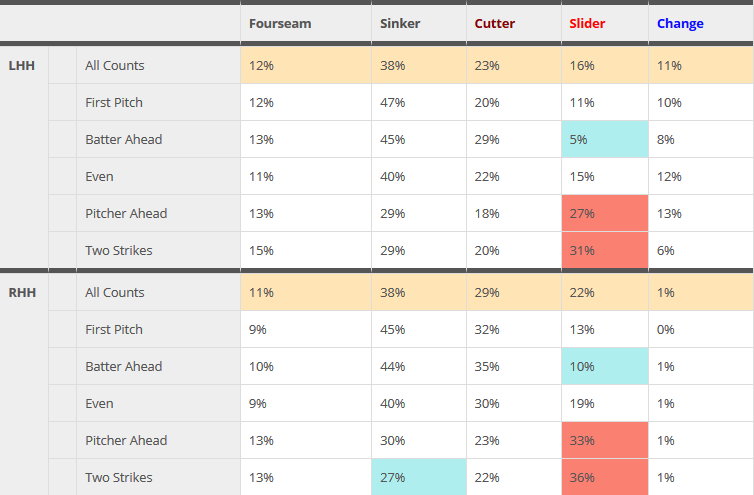 When he’s ahead in the count, Kluber is going to try to put the hitter away with the slider, both righties and lefties. It’s so good he can use it against batters on both sides of the plate. For the most part, his pitch selection split is fairly small. Lots of sinkers, cutters, and sliders against everyone. A few more changeups against lefties, though not a ton.

Here is every pitch from Kluber’s three-hit shutout of the terrible White Sox — to be fair, Kluber makes just about everyone look terrible — back on April 21st:

I’m not sure how anyone ever gets a hit against this guy. You basically have to hope he makes a mistake. His pitcher’s pitches don’t get hit. If Kluber throws you a fastball, you don’t know if it’s a cutter or sinker until it’s about halfway to the plate, and by then your brain is already telling your arms to start swinging. If he throws you a slider, well, good luck.

Kluber does have a platoon split, but it is a small one, and he’s so damn good against righties that he’s starting from a very low baseline. He dominates lefties too, just not as much as righties. His 2017 numbers:

Great pitcher is great against hitters on both sides of the plate. News at 11.

Yes! You need to get runners on base first and that’s a tall order, but opponents went 15-for-20 (75%) stealing bases against Kluber this season, and that’s with the great catch-and-throw tandem of Roberto Perez (43% caught stealing) and Yan Gomes (42%) behind the plate. Last season runners went only 4-for-11 (36%) stealing bases against Kluber, but the year before it was 16-for-23 (70%). I wonder what the fluctuation is about. Maybe just sample size?

I am generally anti-stolen base, especially early in the game — just let the game’s best home run hitting team swing the bat with men on base! — but if the Yankees have an opening with either Gardner or Ellsbury (or Hicks), it might be worth letting them try to steal. You can’t count on stringing together walks and base hits against Kluber. It’s a risk. No doubt. But sometimes you have to take risks to beat the best.

Against a pitcher like Kluber, a legitimate ace at the peak of his powers, there’s not a whole lot you can do other than a) hope he makes some mistakes, and b) try to work long at-bats to get him out of the game as quickly as possible. If he’s on, forget it. There won’t be much the Yankees can do, as defeatist as that sounds. Kluber can be beat. Absolutely. It’ll just take pretty much everything going right for the Yankees.

The Indians are forcing the Yankees to hit breaking balls by not throwing fastballs
2017 ALDS Game Two: Yankees at Indians