In just a few hours the Yankees will once again face veteran right-hander Ervin Santana in a postseason game. He will start tonight’s Wild Card Game for the Twins. Santana faced the Yankees in both the 2005 and 2009 postseasons with the Angels, allowing six runs (four earned) in eleven total innings. Weirdly enough, he’s never started against the Yankees in the playoffs. He’s made five relief appearances.

Santana had a marvelous regular season — he’s probably going to get some down ballot Cy Young votes — in which he threw 211.1 innings with a 3.28 ERA (4.46 FIP) and average-ish strikeout (19.3%), walk (7.1%), and ground ball (41.2%) rates. That includes one start against the Yankees. Santana allowed two runs in 5.2 innings at Yankee Stadium two weeks ago. These days Santana is more of a contact manager who gets a lot of weak fly balls than a strikeout pitcher, hence his .245 BABIP in 2017.

The Twins announced last week Santana would start the Wild Card Game, so even though the Yankees were still alive in the AL East race as late as Game 161, they’ve been preparing for Santana for quite a while now. Scouting reports, video, the whole nine. Santana has been around a while, but like everyone else, he’s changed over time. The 2017 version of Santana is not necessarily the same guy we’ve watched the last ten years. Here’s a look at Minnesota’s starter.

Although he has faced the Yankees franchise plenty of times over the years, Santana doesn’t have a ton of experience against the current crop of Yankees because they’re so young. Jacoby Ellsbury leads the way with 40 career plate appearances against Santana. Brett Gardner has 34 and Todd Frazier has 27. No one else has more than 18.

All told, players on New York’s roster have hit a combined .272/.316/.481 with ten doubles and eight homers in 176 plate appearances against Santana. That includes data dating all the way back to 2006, when 26-year-old Matt Holliday went 1-for-3 with a double against 23-year-old Ervin Santana. Not sure that history is relevant now. Here’s how the current Yankees have fared against Santana since the start of the 2015 season, via Baseball Reference:

Head-to-head stats are a weird thing. I absolutely believe a hitter can “own” a certain pitcher and vice versa, but the head-to-head stats don’t always reflect that because they’re usually very small sample sizes spread out over several years. Does Santana “own” Castro because Castro is 1-for-8 against him the last three years? Maybe! But I’m not sure the 1-for-8 is reflective of the matchup or just regular baseball noise.

Tonight’s starting pitchers are pretty similar. Both Santana and Luis Severino are fastball-slider pitchers who use a changeup as their third pitch, though Severino has considerably more velocity on the fastball and slider. (Fun Fact: Current Yankees international scouting director Donny Rowland signed both Santana and Severino as amateurs out of the Dominican Republic.) Santana was a straight fastball-slider guy for a very long time. It wasn’t until fairly recently that the changeup became a legitimate weapon for him.

Here, via Brooks Baseball, is Santana’s pitch selection against right-handed and left-handed batters this season: 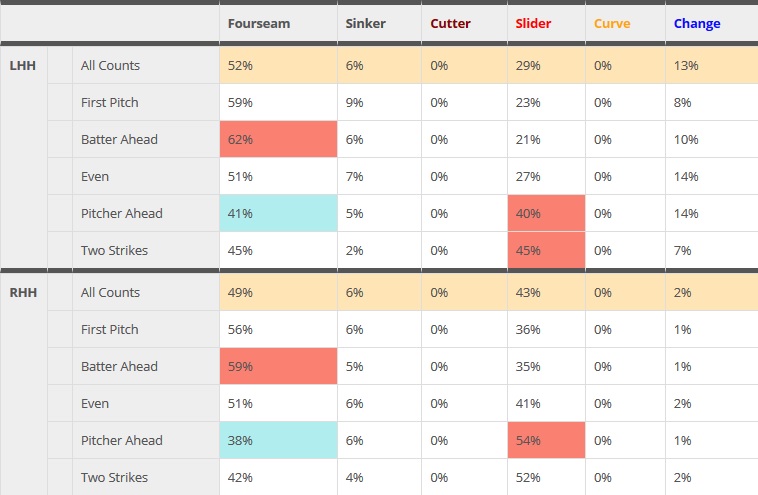 Santana throws lots of fastballs and sliders to all hitters, regardless of handedness, though the changeup he will use basically only against lefties. That’s pretty typical. Severino does the same thing. When Santana gets ahead in the count, he’s really going to lean on his slider. When he falls behind, he tends to use a fastball to get back in the count.

Now, that said, teams and players have a way of changing the scouting report in the postseason. Pitchers will lean more heavily on their best pitch — Santana’s slider, in this case — in an effort to get outs. We could definitely see Santana spin more breaking balls tonight, even when behind in the count. That is his best chance for getting a swing and a miss and his best chance for getting an out in general.

Enough words, let’s get to some video. Here is every pitch from Santana’s four-hit shutout of the oh so terrible Giants on June 9th of this season:

As you can see in the video, Santana is going to live on that outside corner against righties. Fastballs and sliders, away away away all game. It’s not just that one game against the Giants either. Here is Santana’s fastball and slider location heat map against right-handed batters this season, via Baseball Savant: 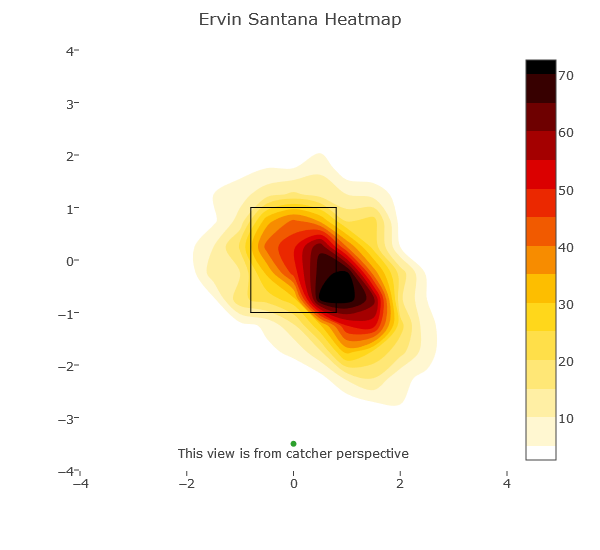 Like I said, away away away to righties. Maybe Santana will change things up in the Wild Card Game and make an effort to bust righties inside more often, though it sure seems like pounding that outside corner is his comfort zone. Judge, Sanchez, Castro, Frazier … zero in on that outside corner.

That changeup has been enough of a weapon for Santana that he’s had a reverse split the last two years. Righties hit him better than lefties now. Huh. That wasn’t always the case, of course. Santana once had a pretty significant platoon split. Now it’s reversed, or at the very least even. Here are his last three years:

On one hand, the lack of a platoon split means the Yankees can’t stack their lineup with lefties and take aim for the short porch. I mean, they could, but it wouldn’t create a clear advantage against this pitcher. On the other hand, Santana’s lack of a split means the Yankees could simply play their nine best players, and not fret over ideal matchups. Santana is effective against both righties and lefties, so just play your best. Simple, right?

Kinda. Santana used to have big time problems controlling the running game — runners went 122-for-149 (82%) in stolen base attempts against him from 2007-12 — though he has done a better job later in his career. Runners went 11-for-13 (85%) stealing bases against Santana this year and 23-for-27 (85%) over the last three years. Still a high likelihood of success, but not nearly as many chances.

Of course, the catcher plays a big part in this as well, and Jason Castro threw out only 15 of 57 (26%) attempted basestealers this season. That includes one of 12 with Santana on the mound. The Yankees ran wild on Joe Biagini and Raffy Lopez the other day. They probably won’t be able to do the same in the Wild Card Game tonight, but, if they pick their spots — the Yankees did steal two bases against Santana and Castro two weeks ago, for what it’s worth — the Yankees should be able to swipe some bags tonight. The opportunity for stolen bases exists.

Ervin Santana is not Dallas Keuchel circa 2015, that bonafide ace who shut the Yankees down in the winner-take-all Wild Card Game, but he is a very good Major League pitcher, and they figure to have their hands full tonight. Probably the biggest thing to take away here is that when a righty is at the plate, Santana is going to the outside corner. That’s his spot. That won’t help Yankees hitters discern a fastball from a slider, but having a pretty good idea where the pitch will be located takes one variable out of the equation.

The Yankees need their arms to neutralize the Twins' legs in the Wild Card Game
Hicks, not Ellsbury, starting in center field in Wild Card Game