Fighting Spirit, West Coast Style
It was deja vu all over again for these Cardiac Kids on Friday night in Anaheim. One day and 3,000 miles removed from their stunning walk-off win to cap off the series sweep of the Twins, the Yankees rallied for yet another dramatic and improbable victory over the Angels.

When Aroldis Chapman sealed the 4-3 win with a scoreless 10th inning, it marked the first time since Games 4 and 5 of the 2001 World Series that the Yankees had won games on back-to-back days in which they trailed entering the ninth inning.

The win was even more satisfying considering the fact that Angel Stadium has been a house of horrors for the Yankees in the Wild Card Era. Entering this series, the Yankees were below .500 at only one ballpark since 1995 (min. 100 games): Angel Stadium (46-58). And the last time they won a game in extras in Anaheim was July 31, 2003 – on a 10th-inning go-ahead single by the immortal Nick Johnson.

Miguel Andujar started the comeback in the ninth with a one-out double to left field. It was the 13th career double for #MiggyMantle, who became the first player in baseball history (or at least since 1908) to hit that many doubles before playing in his 25th career game.

His ability to pile up extra bases this season has been remarkable as well. That double was his 15th extra-base hit in 2018 (11 doubles, 1 triple, 3 homers), making him the second-youngest player in franchise history to have 15 or more extra-base hits within the team’s first 25 games. You’ve probably heard of the other guy, his name in is Lou Gehrig (1927).

Brett Gardner sent the game to overtime when entered in the ninth as a pinch hitter and delivered a game-tying sacrifice fly. That was Gardner’s 46th career pinch-hit plate appearance, but the first time he’d ever driven in a run in that role. Unsurprisingly, his production as a pinch hitter is pretty awful: .135/.267/.162 with four singles, a double and (now) one sac fly.

The least shocking part of the late-game rally was that Didi Gregorius wore the hero’s cape, hammering a solo shot into the right-field seats in the top of the 10th to give the Yankees a 4-3 lead. Amazingly, it was his first career homer in extra innings, and it was also his first homer away from Yankee Stadium this season. Before Friday, he was hitting .222/.294/.407 in eight games at Toronto, Boston and Detroit.

That blast was his 10th homer and 30th RBI of the season, all of which have come this month. The only other Yankee with at least 10 homers and 30 RBI in April? Alex Rodriguez, who kicked off his 2007 MVP campaign with 14 homers and 34 RBI in April.

To celebrate Didi’s heroics, we give him our Obscure Yankeemetric of the Series: an eclectic list of Yankees to hit an extra inning homer against the Angels:

Home runs are overrated?
The Yankees surprising destruction of the Angels continued on Saturday night with an 11-1 rout of the team that had previously been their longtime west-coast kryptonite.

This is only the fourth time in the series history that the Yankees have won a game by double digits in California. They also did it twice in 1996 (August 31 and May 27) and once in 1986 (June 4).

But, these huge blowouts have become the semi-norm for this Yankees squad. It was their third win by at least 10 runs this season — a feat accomplished just three other times in franchise history this early into the season. The 1994, 1939 and 1931 teams also had three double-digit wins within the team’s first 26 games. By the way, the 1939 Yankees set the MLB record for run differential in a season (+411).

The Yankees pounded the Angels early and often, scoring five runs in the first and five runs in the second inning, while batting around in both innings. A few notes on their latest onslaught at the plate:

Perhaps the most incredible note is that they did this all without sending a ball over the fence. It had been nearly a decade since the Yankees won a game scoring more than 10 runs while not hitting a home — the last time it happened was May 25, 2009. Before Saturday and since the start of the 2010 season, every other team in the majors had done this besides the Yankees.

There were plenty of offensive highlights, but let’s instead shine the spotlight on the excellent job by Masahiro Tanaka. He held the Angels to two hits (though one was the #obligatoryhomer) and one run while striking out a season-high nine batters in six innings.

Tanaka’s career-long dominance over the Angels is noteworthy. He lowered his ERA against the Angels to 1.60 in five starts, the third-best against them among active starters (min. 25 IP), behind Bud Norris (0.43) and Chris Sale (1.23).

And another #FunFact for Tanaka: It was his third start in a row against the Angels in which he allowed no more than one earned run and struck out at least eight batters. Two other pitchers in the Divisional Era (since 1969) have put together a streak of three straight games like that against the Angels — Felix Hernandez (2014, 2015) and Clayton Kershaw (2015-17).

Sanchez FTS (For The Sweep)
Another series, another sweep for the unstoppable Yankees. It was just the second time in the Wild Card Era (since 1995) they’ve swept a series in Anaheim; the other one was July 29-31, 2003. The 2-1 victory also extended their win streak to nine games, their longest since a 10-gamer in June 2012. This is also only the second time in franchise history they’ve won nine games in a row within the month of April — the other such streak came in April 1987. (Yeah, I know, that season didn’t end so well.)

Gary Sanchez gave the Yankees an early 2-0 lead with an absolute bomb into the left field seats in the fourth inning. Sanchez has 20 hits and 15(!) of them have gone for extra bases (eight doubles, seven homers). That’s the highest rate of hits for extra-bases (75 percent) of any player this season with at least 90 plate appearances. The MLB average this season is 36 percent.

And by the way, singles are overrated, according to Sanchez:

CC Sabathia was outstanding in his fifth start of 2018, going seven strong innings with one run allowed on five hits, and lowering his ERA to 1.71. This is just the second time in his career he’s had an ERA that low after five or more starts into the season; in 2006, his ERA was 1.52 after his sixth start and 1.71 after his seventh start.

Sabathia did an excellent job of painting the outside corner against the Angels righty-heavy lineup (despite the best efforts of umpire Angel Hernandez), changing eye levels and keeping the hitters off-balance all night. He got 26 called strikes among his 97 pitches (26.8 percent), the fourth-best called strike rate in any start of his Yankee career. 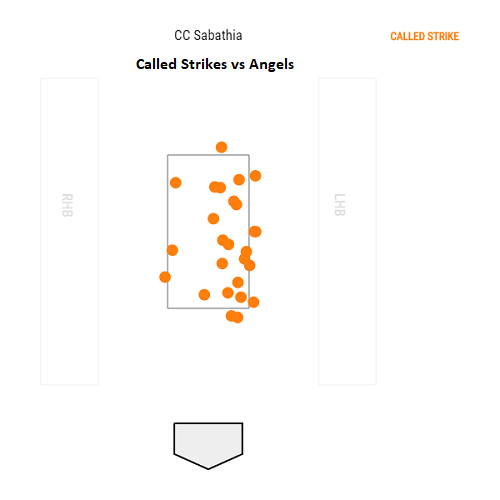