Gardy goes Yardy FTW
Good pitching beats good hitting? Not so fast, my friend. The Yankees took the first game of the Subway Series, scoring three runs off Mets ace Jacob deGrom, en route to a 4-1 win on Friday. deGrom had given up a total of three runs over 47 1/3 innings in his previous eight starts combined before facing the Bronx Bombers lineup.

The bottom half of the first began with a bang as Brandon Nimmo crushed the second pitch he saw from Masahiro Tanaka into the rightfield seats. It was the first leadoff homer allowed by the Yankees this season. Going deep against Tanaka is hardly rare, though, as he’s now surrendered at least one homer in six straight games — the first time he’s done that in his MLB career — and 11 of 13 starts this season.

After surrendering the #obligatoryhomer, Tanaka settled down and was fantastic, retiring 12 straight and 14 of his final 15 batters faced. He didn’t allow another hit or a run, while striking out eight over five strong innings. It was the first time in 122 MLB starts that he didn’t give up more than one hit.

Tanaka is the third Yankee starter to have at least eight strikeouts and one or fewer hits allowed in a game this season, joining Domingo German (May 6 vs Indians) and Luis Severino (April 16 vs Marlins). This is the first time in franchise history they’ve have three starters do that in a single season … and its the first week of June.

Aaron Judge tied the game on a sac fly in the sixth, as Tanaka “raced” home from third after getting on base via an Adrian Gonzalez error a few batters earlier, but then left the game with sore hamstrings and was placed on the DL. To lessen the blow of this injury, let’s have some fun and give him our Obscure Yankeemetric of the Series:

Tanaka is the first Yankee pitcher to reach on an error and score a run in the same game since Mel Stottlemyre on September 1, 1972 against the White Sox.

The game remained knotted at 1-1 until the eighth when Brett Gardner launched a tiebreaking two-run shot off deGrom. Gardner doesn’t go yard often, but when he does, he makes it count. Since the start of last year, he has five homers that either tied the game or gave the Yankees the lead in the eighth inning or later, the most of any Yankee in that span.

Gley-bae and Miggy Show
It was deja vu all over again on Saturday night for the Yankees, who again fell behind early in the first inning to the Mets, rallied to tie the game in the sixth, and then won it with a dramatic eighth-inning homer.

Including Aaron Judge’s 13th-inning blast to beat the Blue Jays on June 6, that’s three straight games with a go-ahead homer in the eighth inning or later, the first time the Yankees have done that in more than four decades. From August 29-31, 1977, they beat the Royals and Mariners (twice) on late homers by Chris Chambliss, Mickey Rivers, and Graig Nettles.

Like Tanaka the night before, Domingo German battled through a rough first inning (three runs, two homers, a triple) but then was excellent in the next five frames. After the first, he allowed two hits and no runs while striking out nine, and for the first time as a starter, he didn’t walk a batter.

Postgame, Aaron Boone mentioned that he sharpened his fastball command after the first inning and the stats back that up. He threw just four of his 12 fastballs (33%) in the zone to open the game and then filled up the zone with 21 of his 42 fastballs (50%) in innings two through six. 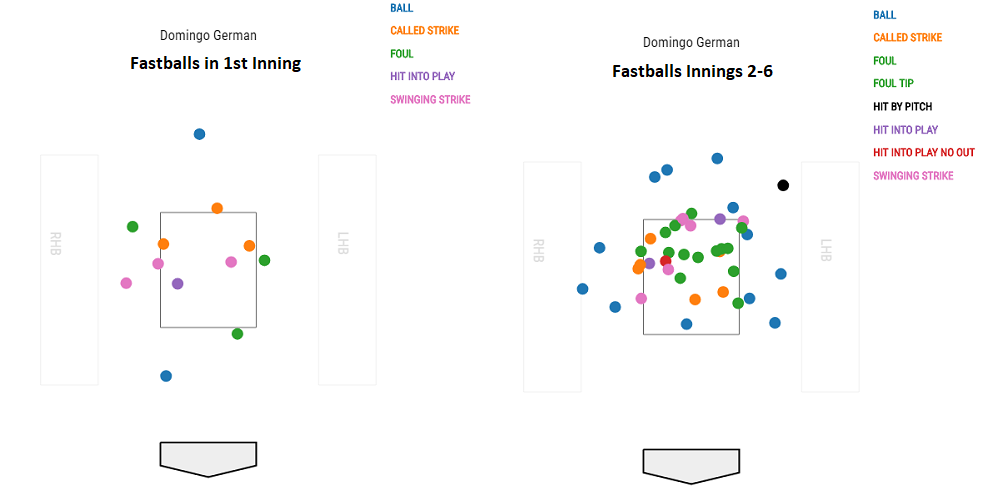 The ability to command his fastball helped him stay out of the hitters’ sweetspot and paint the corners, keeping the Mets lineup off-balance for the rest of the night. Overall, 44% of his 96 pitches were on the edges of the strike zone (per Statcast), his best rate as a starter.

The comeback began in the third inning when Gleyber Torres rocked a 406-foot homer to left-center field for the Yankees first run of the game. At 21 years and 178 days old, he became the youngest player to go deep in the Subway Series rivalry (for either team). His fellow Baby Bomber, Miguel Andujar, then made it 3-3 in the sixth with a 404-foot shot to left-center. Four of his eight career homers have either tied the game or given the Yankees the lead, but this was his first career hit that either tied the game or gave the Yankees the lead in the sixth inning or later.

No runs, no win
You know the saying …. all good things must come to an end … and the Yankees proved that to be so true on Sunday night. They had their four-game win streak snapped in gut-wrenching fashion, getting blanked by their crosstown rival, 2-0.

It was the first time they didn’t score a run this season — the Yankees were the last team in the majors to be shut out — and ended a string of 110 consecutive regular-season games scoring at least one run dating back to August 11 last season. That matched their longest scoring streak in the last 40 years; they also had a 110-gamer in 2005.

The Yankee bats were silenced by curveball artist Seth Lugo, who struck out eight and gave up just two singles over six scoreless innings. He is the first Mets pitcher ever to pitch at least six innings while allowing zero runs and no more than two hits in a game against the Yankees.

Luis Severino was worked hard by the Mets lineup early, throwing 31 pitches in the first inning and 93 total, before exiting after five innings during which he allowed two runs on five hits. In two previous appearances against the Mets (one start, one in relief), Severino had pitched 10 2/3 innings without allowing an earned run, and in his three previous career Interleague starts on the road, he had given up just one earned run over 19 1/3 innings. Cue John Sterling: “That’s baseball, Suzyn.”

Sevvy’s signature slider was nasty at times (tied season-high with 11 whiffs), but his location was inconsistent and a rare mistake with the breaking pitch resulted in the tie-breaking homer by Todd Frazier. Entering the game, Severino had thrown 490 sliders this season and only one of those was hit for a homer, by Blue Jays outfielder (and noted Yankee killer) Teoscar Hernandez on April 22.