River Ave. Blues » Yankeemetrics: Road Bombers Rolling (June 4-6)
2018 Draft: Yankees go heavy on catchers and college players on Day Three
It won't be easy, but the sooner the Yankees can trade for pitching, the better

Severino goes beast-mode
The Yankees three-city road trip continued with a short stop in Detroit for a double-header on Monday, their first twinbill against the Tigers since May 12, 2010. They took the afternoon contest thanks to another brilliant start by Ace Severino, who was backed up by one of the Bronx Bombers’ patented explosive innings at the plate in the 7-4 victory.

After the Tigers took an early 1-0 lead in the first, the Yankees knotted it up at 1-1 in the third with another clutch homer by Gleyber Torres, the 10th of his career. At 21 years and 173 days old, he became the second-youngest Yankee to reach double-digit home runs, trailing Mickey Mantle (19 years, 323 days) and just ahead of Joe DiMaggio (21 years, 216 days). That’s quite the legendary pinstripe sandwich (sorry!).

Greg Bird untied the game with his own solo homer in the fourth inning, sparking a six-run frame during which the Yankees had six straight hits before the Tigers even got one out. Obscure, yet sweet, stat alert: It was the fourth game that the Yankees scored at least six runs in an inning, tied with the Cubs and Astros for the most such games in MLB (through Monday).

Severino was a beast on the mound, mowing down the Tigers lineup after a first-inning hiccup, as he went eight innings while allowing two runs (one earned) with 10 strikeouts and no walks. In other words, just another typical Sevy gem:

And just for fun … the only other Yankee pitcher to strike out at least 10 guys, walk none and allow one earned run or fewer in a game against the Tigers was Roger Clemens on July 19, 2000.

Two is not enough
The bats went cold in the nightcap as the Yankees dropped the second game in Motown, 4-2, in one of their more frustrating losses of the season. They went 0-for-10 with runners in scoring position, left 10 men on base, and twice loaded the bases without plating a run.

The split meant that the Yankees still haven’t swept a twinbill since April 16, 2014 against the Cubs, an eight-doubleheader sweepless drought that is the longest by a Yankee team in nearly 50 years (14 straight in 1969-70).

Miguel Andujar provided one of the few offensive highlights with two booming doubles, his team-leading 19th and 20th two-baggers of the season. He is the eighth Yankee since 1908 to reach 20 doubles this early into the season, and the only rookie in that group.

It’s only the first week of June, but he is already the first Yankee rookie third baseman with 20 doubles in a season since Gil McDougald, who would go on to win AL Rookie of the Year in 1951 to kick off a productive (yet largely forgotten) 10-year career in pinstripes.

While Miggy was spraying balls into the gap, Aaron Judge was whiffing and watching called strikes pass by him at the plate. He got his first career five-strikeout game on Monday night, and combined with his three punchouts in the afternoon game, became the unfortunate record-holder for the most strikeouts by a player in a doubleheader. Six guys previously had struck out seven times in a twinbill, and the most recent one was Shea Hillenbrand on Sept. 27, 2005.

#PapaSlam
The final leg of their road trip to them north of the border to the Rogers Centre, a place that had recently been a house of horrors for the Yankees. Entering the series they were 8-16 at the venue since the start of 2016, their worst record at any AL ballpark over the last three seasons. A combo of Baby Bomber power and Vintage Veteran pitching helped the Yankees get a rare win there on Tuesday.

CC Sabathia rebounded from an awful four-start stretch to deliver a turn-back-the-clock performance that was reminiscent of the pitcher who had a 1.39 ERA through his first six starts of the season. He kept the Blue Jays off the board through the fifth inning, and the only runs he gave up were on two solo homers in the sixth and seventh frames.

Facing an all-righty (including switch-hitters) lineup, Sabathia relied on his changeup — a season-high 20.2 percent usage rate — to complement his other off-speed pitches, and the pitch was super-effective for him. It was all about location, location, location, as he pounded the outer edge of the zone: 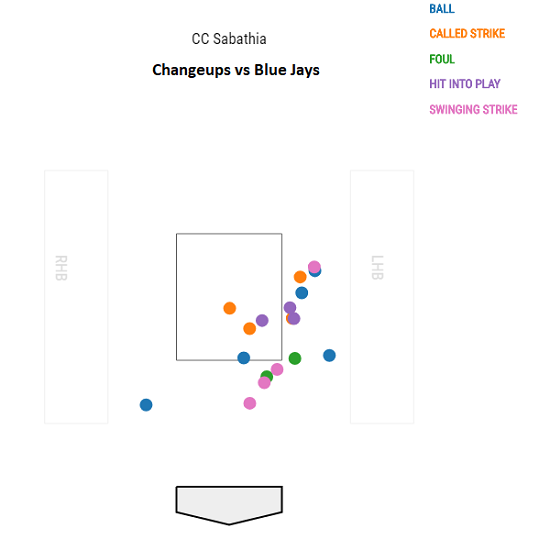 None of his 18 changeups resulted in a hit or walk, and they netted him four called strikes, four swinging strikes, a couple foul strikes and just three balls hit into play with an average exit velocity of 70.8 mph.

Miguel Andujar made sure that Sabathia earned the win, crushing his first career grand slam in the seventh inning that turned a 1-0 deficit into a 4-1 lead. Let’s celebrate with our traditional bullet-point salute:

Lucky No. 13
Another day, another game, another drama-filled and stunning win for the Yankees. Ho Hum.

The Fighting Spirit was strong on Wednesday night as the Yankees capped off their mini-sweep in Toronto with a 3-0 win in 13 innings. The only other time in the last 25 years that the Yankees beat the Blue Jays in a game that went 13 or more innings was April 19, 2001, a 6-5 win that lasted until the 17th. Neither team put any runs on the board until the Bronx Bombers exploded for three in the 13th. This was the 623rd game played between the Yankees and Blue Jays, and the first one that was scoreless through nine innings.

Aaron Judge wore the hero’s cape after his 404-foot monster blast to center untied the 0-0 game in the top of the 13th inning.

The only other Yankees in the last 90 years to break a scoreless tie with a homer in the 13th inning or later were Alex Rodriguez, who hit a 15th-inning walk-off homer on August 7, 2009 against the Red Sox, and Bill Skowron, who hit a solo shot in the top of the 14th on April 22, 1959 to beat the Senators.

Perhaps the most amazing stat of the game: this was Judge’s first career extra-inning hit of any kind; he was 0-for-14 with 10 strikeouts in extras prior to the homer on Wednesday night.

Lost in the extra-inning madness was an outstanding gem thrown by Sonny Gray, who retired the first 12 batters he faced and allowed just two hits over eight scoreless innings. It was the first time in 25 starts as a Yankee (including the postseason) that he didn’t give up a run.

2018 Draft: Yankees go heavy on catchers and college players on Day Three
It won't be easy, but the sooner the Yankees can trade for pitching, the better