Kluber Klobbered
The Yankees kickstarted their final pre-break series with a crazy comeback win, roughing up Corey Kluber while overcoming multiple deficits to beat the Indians 7-4 on Thursday night.

The Indians and Yankees traded punches all night, and Aaron Hicks eventually delivered the decisive blow with a tie-breaking RBI double in the eighth inning. That sealed the Yankees eighth win this season when tied at the start of the eighth inning, three more than they had all of last year and the second-most in baseball this season (behind the A’s).

Before Hicks’ clutch hit, a couple other guys got to wear the hero’s cape for a few innings.

Its a good thing the Yankees were swinging hot bats because Luis Severino was approaching freezing temps against the Indians. He struggled from the start, giving up a double on his second pitch of the game, an RBI single and then a homer later in the first inning. The two runs and two extra-base hits he allowed on Thursday in the first inning nearly matched the total number of runs (3) and extra-base hits (3) he had allowed in the opening frame of his first 19 starts this season combined.

Down and out
The Yankees once again dug themselves into an early hole on Friday night thanks to shoddy starting pitching, but this time couldn’t complete the comeback, falling 6-5.

Domingo German was blitzed by the Indians, giving up four runs in the first two innings and then two more in the fifth. While he’s certainly not an ace after the first two frames, his innings splits as a starter are interesting, to say the least:

German really struggled with his fastball command, getting strikes on only half (22) of his fastballs thrown (44) against the Indians. 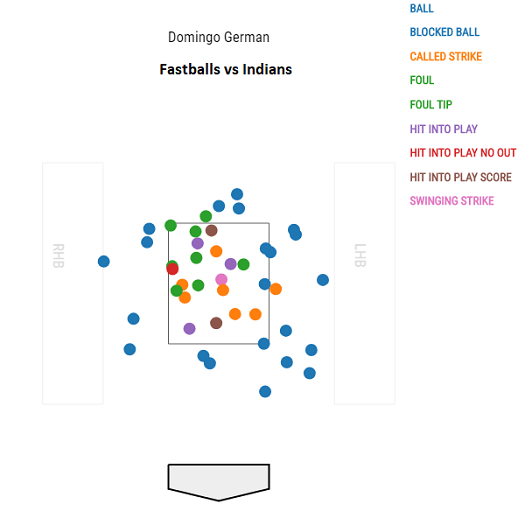 Yikes, that’s a lot of blue circles that are not even close to the zone. This is actually the second time this season he’s had a start with a fastball strike rate of 50 percent or less. No other Yankee pitcher who has thrown at least 30 fastballs in a game this season has done that even once.

Romine the Speed Demon
The Yankees and Indians both did their best to try and lose the game on Saturday with sloppy defense, but it was the Yankees who ultimately prevailed on a wacky play in the seventh inning by Austin Romine.

The Bronx Bombers got to work early, as Didi Gregorius clubbed a hanging changeup over the wall in centerfield for a 3-0 lead in the first inning. Since the start of last season (and through Saturday), the only shortstop who had hit more homers than Didi (42) was Francisco Lindor (56).

CC Sabathia looked solid through the first five innings, allowing just two hits and two runs. But then he got into trouble in the sixth as he faced the Indians lineup a third time, surrendering two more runs before getting pulled with two outs. As strong and effective as Sabathia has been this season, its not shocking he started to unravel in that final frame:

Austin Romine saved the game from being a disaster loss when he broke a 4-4 tie with a “Little League homer” — a double and two errors — in the top of the seventh.

“Why does everyone have fun watching a catcher try to run to third?” – Austin Romine

His mad dash around the bases actually shouldn’t be that shocking for Romine, a guy that actually has better-than-average legs among his positional peers. According to Statcast’s speed metric (“Sprint Speed”), Romine ranks 10th out 37 catchers with at least 50 tracked runs.

Hanging Chad, Green not money
The Yankees head into the break coming off yet another disappointing loss, another game where they snatched defeat from the jaws of victory, blowing an early two-run lead and falling 5-2 to the Indians on Sunday afternoon.

Masahiro Tanaka was sharp through the first few innings before coughing up the #obligatoryhomer to Edwin Encarnacion in the fourth, a two-run shot that tied the game 2-2. That was the 53rd dinger allowed by Tanaka since the start of last season, more than any other pitcher over the last two years (and remember, he was on the DL for a month, too). Those were the only runs he gave up over six-plus innings, which has become a trend for the homer-prone Tanaka: 64 percent of his runs allowed have come via the longball this season, compared to the league average of 40 percent.

Chad Green, who allowed a late game-tying two-run homer to Manny Machado in his previous outing on July 10, imploded for the second time in as many appearances. He surrendered three runs in the eighth inning — including a tie-breaking solo homer to Michael Brantley — and wore the goat’s horns again. It was the first time in his career he got tagged for multiple runs in back-to-back relief outings, and the three runs he gave up were his most ever in a game out of the bullpen.