Dropping series at home to teams on pace for 98 losses is no way to go through life, folks. Bad game, bad series. The Yankees dropped Wednesday night’s series finale 4-1 to the White Sox. It’s their first series loss at home to Chicago since 2005. The ChiSox had been the last remaining American League team without a series win at the new Yankee Stadium.

The Great Ryan LaMarre
Ryan LaMarre? Seriously? The guy is a career .224/.274/.279 (49 wRC+) hitter at the big league level and he’s been on five teams in the last four years. The dude is so far down the organizational ladder that he pitched at Yankee Stadium earlier this year, when he was with the Twins. Tyler Austin took him deep. Seriously. And then Wednesday night he …

How annoying. LaMarre struck first in the second inning. CC Sabathia allowed back-to-back singles to start the inning, then recorded two outs and got ahead in the count 0-2 on LaMarre. He was on the verge of stranding both runners. Then Sabathia left an 0-2 cutter up in the zone and LaMarre drilled it to right field for a two-run double and a 2-0 lead. Giancarlo Stanton and his one good hamstring almost made the lunging catch near the wall, but alas. 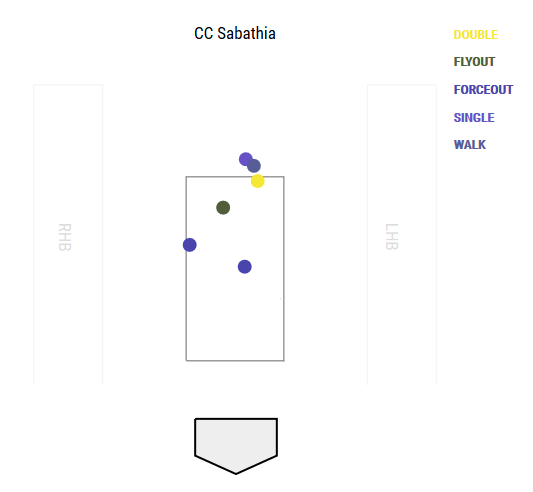 Egads. Two singles, a double, and a walk on elevated two strike fastballs, which for Sabathia means a cutter. He did get one fly out and a jam shot ground ball on two-strike cutters. Otherwise the White Sox turned those mistakes into runs. LaMarre’s two-out, two-strike, two-run double was a real letdown. Sabathia was a pitch away from stranding those two leadoff singles. No dice.

LaMarre burned the Yankees again in the fourth inning. Sabathia walked Yoan Moncada on four pitches with one out, then left a 1-0 cutter out over the plate to LaMarre, who drove it to left field for a double. The speedy Moncada scored from first with ease given there were two outs and he was off and running on contact. LaMarre also added an (opposite field!) solo homer against Chad Green in the seventh. He drove in all four White Sox runs. Dude.

Brett Gardner, who has been slumping hardcore in August and can’t get a day off because the Yankees have neglected to get an outfielder in the five weeks since Aaron Judge got hurt, struck out for the second out of the inning. That brought Giancarlo Stanton to the plate with the bases loaded and two outs … and then Torres got thrown out at home on a wild pitch. Sigh. Here’s the play:

After the game Aaron Boone said he was totally cool with Gleyber going home there because the ball went to the backstop. It just took an unfortunate bounce back to catcher Kevan Smith and the throw was right were it needed to be, he added. Strong, strong disagree. Look at the replay. Torres didn’t get a good secondary lead at all and he hesitated before breaking home. With the bases loaded and Stanton up, once you hesitate, you have to hold. Gotta let the big man hit there. Instead, the final out was made at home with the bases loaded. G r o s s.

Leftovers
Thanks to LaMarre’s home run against Green, the bullpen has now allowed at least one run in seven of the last eight games dating back to the 12-inning game in Miami last week. Green has allowed eight home runs in 62.2 innings this season. He allowed four homers in 69 innings last year. A.J. Cole and Tommy Kahnle, the only when losing relievers, each struck out two in a perfect inning.

Scary moment in the seventh inning. Torres was spiked in the left thumb applying the tag on Yolmer Sanchez’s steal attempt. It wasn’t intentional. Just a bang-bang play and Gleyber’s glove was in the wrong place and the wrong time. He has a cut but did stay in the game and even stroked a single in his next at-bat. He’s fine, apparently. And thankfully.

Box Score, WPA Graph & Standings
The box score and updated standings are at ESPN and the video highlights are at MLB. Here’s our Bullpen Workload page and here’s the loss probability graph:

Up Next
The White Sox leave town and another AL Central team comes to the Bronx. The Yankees open a four-game series with the Tigers on Thursday night. Veteran left-ballers J.A. Happ and Francisco Liriano will be on the mound in the series opener.