River Ave. Blues » Yankeemetrics: Welcome back bats, sweep Jays (Aug. 17-19)
Fan Confidence Poll: August 20th, 2018
Losing Gregorius would be a big blow, but the Yankees have the infield depth to get by

Rain FTW
The Yankees snapped their mini losing streak and offensive slump with a rain-shortened 7-5 win over the Blue Jays in Friday’s opener. It was their first game called early because of weather since July 23, 2014 against the Rangers, a game that was stopped in the fifth.

Lance Lynn made sure that this would be a hard-earned comeback win as he got hammered by the Blue Jays in the first inning, surrendering four runs on three hits and three walks before the Yankees even got a chance to swing the bat. Regression is an unforgiving and terrible monster:

It’s the first time the Yankees won a game after giving up four or more runs in the first inning since … May 3 last year against Toronto. The opposing starter that the Yankees pounded that day in the Bronx? Yup, Marcus Stroman, the same guy that the Yankees blitzed on Friday.

Didi Gregorius (RBI triple) and Miguel Andujar (RBI double) sparked the rally in the bottom of the first, quickly cutting the deficit to two runs. Gregorius’ triple was his fourth of the season, the same number he had in his previous three seasons combined with the team. Andujar’s two-bagger was his 35th of the season, putting the young third baseman in elite company.

Neil Walker turned a 4-2 deficit into a 5-4 advantage with one swing of the bat in the fourth inning. His three-run shot off Stroman was his seventh homer of the season but his first as a Yankee that gave the team a lead.

Giancarlo Stanton capped off the scoring with a mammoth solo shot to right-center in the bottom of the seventh, just before the rainstorm halted the game. It went a projected 431 feet, the fifth time this season he hit a homer of at least 430 feet to center or the opposite field, tied with Bryce Harper for the most in the majors through Friday.

Bombers back in style
The Yankees continued to bash Blue Jays pitching, scoring in double digits for the first time in more than six weeks en route to a homer-fueled 11-6 win on Saturday. They hit four home runs, giving them 201 through 123 games played. The only team in MLB history to reach the 200-homer mark quicker was the 2005 Rangers, who needed 122 games.

Luis Severino, who entered the game still struggling through a deep month-plus slump, bounced back from a terrible outing against the Mets earlier in the week to throw one of his best starts since the beginning of July. Though he struggled with his pitch efficiency (needed 100 pitches to get 15 outs), and gave up a bunch of hard contact (5 of 12 balls in play had an exit velocity of 98-plus mph), he was able to limit the damage to two runs while getting eight strikeouts.

The most encouraging number might be zero, as in the number of home runs he allowed. It was his first clean outing since July 1, and he had coughed up 11 dingers in his previous seven games before Saturday. His fastball command seemed to be improved, as he mostly avoided the meatball four-seamers that had plagued him recently. Even when he did leave a few of them over the heart of the plate, he was able to generate a whiff or a foul, giving up just two singles on his heater. 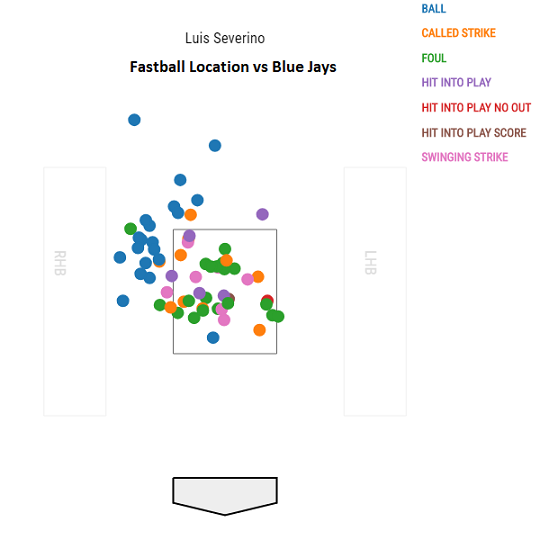 Miguel Andujar hit the team’s 200th homer in the fifth inning, his 20th of the season. He is the fifth Yankee with at least 20 home runs, making the Yankees the only team in MLB with five 20-homer guys this season. Combined with his 36 doubles, Andujar is clearly putting up special numbers for a player as young as he is:

Another Happ-y day
The Yankees completed the three-game sweep and finished off their 11-game homestand with another easy blowout win on Sunday, 10-2. They’re now a season-high 32 games above .500, the first time they’ve reached that mark since they ended the 2011 season with a 97-65 record.

They put up nearly identical box score numbers as the previous game, exploding for 10 runs and 12 hits (had 11 runs and 11 hits on Saturday). This was the 629th game in the history of the Jays-Yanks rivalry, but the first time the Yankees scored at least 10 runs in back-to-back games against them.

The Yankees wasted no time in lighting up the scoreboard as the first six batters each scored in the opening frame before Kyle Higashioka flew out to center for the first out. You have to go back more than two decades to find the last time the Yankees scored at least six runs to start a game prior to making an out — on May 17, 1997 against the Rangers in Texas. The last time they did at at Yankee Stadium was September 25, 1990 against the Orioles.

The big blow came off the bat of Greg Bird, who clobbered his second career grand slam — both of which have come in the last six weeks. He is just the fourth Yankee first baseman to hit multiple grand slams in a single season:

Yankee 1st Baseman with multiple grand slams in a season since 1925:

J.A. Happ got off to a rough start, giving up a two-out solo homer in the first inning, but then quickly regrouped and didn’t allow another run until Kendrys Morales took him deep to lead off the sixth. It wasn’t a gem, but Happ still pitched well enough (2 ER in 5 1/3 IP) to win for the fourth time in four starts with the team. The Yankees have won all seven games started by Lance Lynn and Happ this season. Finally, a couple #FunFacts to celebrate Happ’s time so far in pinstripes:

Fan Confidence Poll: August 20th, 2018
Losing Gregorius would be a big blow, but the Yankees have the infield depth to get by