The 2018-19 offseason will be all about pitching for the Yankees. Yes, they have to find a Didi Gregorius replacement, but pitching is clearly the top priority. Starters, mostly, but another relief pitcher or two wouldn’t hurt. Even with CC Sabathia re-signed, Sonny Gray is as good as gone, meaning Luis Severino and Masahiro Tanaka are the only other incumbent starting pitchers.

“I think we’ll just gravitate to anything that will make sense,” Brian Cashman said to Bryan Hoch earlier this week. “It could be a combination (of things). Something could make sense via trade in the same category as free agency. I’m interested in adding more than one pitcher. I need to, I think, add multiple. If I can do so, we’ll see.”

The Yankees have been connected to Corbin in recent years and have already been connected to him this offseason. He’s said to be one of their top targets, in fact, which makes sense. He’s very good, he’s a lefty, and he’s still only 29. Pretty much exactly the kind of guy the Yankees need to add to their rotation, right? Right. Let’s dig into the current version of Corbin.

Corbin is a native New Yorker. He grew up near Syracuse and it wasn’t until his junior year of high school that he started pitching (or playing baseball in general). Corbin spent one year at a junior college in Utica and another year at a junior college in Florida. The Angels drafted him in the second round of the 2009 draft (four picks after the Yankees took John Ryan Murphy) and traded him to the D’Backs in the Dan Haren deal at the 2010 deadline. He made his big league debut in April 2012 and had been with Arizona since the trade.

This past season was easily the best year of Corbin’s career. He was a deserving All-Star and I imagine he’ll finish in the top five of the Cy Young voting. This was not his only above-average season, however. Corbin was also an All-Star in 2013, a season in which he threw 208.1 innings with a 3.41 ERA (3.43 FIP) with solid strikeout (20.7%), walk (6.3%), and ground ball (46.7%) rates. This year he took those strong peripherals to another level.

Against righties, Corbin’s expected weighted on-base average (xwOBA) improved quite a bit this year even though his average exit velocity and launch angle are very similar. (To be clear, a sub-8.0° launch angle is very, very good. Anything under 10° is really good.) There are a few reasons for that. One, the league averages change year to year. A ball with X exit velocity at Y launch angle can have different average outcomes from one year to the next. Two, direction matters. Hard contact into the gaps is better than hard contact toward a defender.

And three, we are talking about relatively small sample sizes. Corbin faced 624 righties this year and only 400 put the ball in the play — he had a 29.9% strikeout rate against righties, which is pretty excellent — and 400 isn’t that many. It’s enough to say “this guy is doing well against righties.” I’m not sure it’s enough to be definitive proof of a trend. Corbin’s always been real good against lefties. This year he was suddenly great against righties.

Part of me wonders whether Corbin really benefited from the ball being un-juiced. Home runs went down around the league this year and, while there’s no hard evidence, it seems the most widely accepted explanation is MLB changing the ball a bit. Home runs flew out the park last year. It was nuts. That wasn’t so much the case this year. The combination of legitimate improvement and a friendlier baseball could’ve led to Corbin’s monster season.

One other thing I should note at some point: Corbin is regarded as a very good defensive pitcher. He’s made four errors in 945.2 career innings and none since 2016. (All four errors are throwing errors to first base on bunts/grounders back to the mound.) Aside from 2016, when he managed a -1 DRS in 155.2 innings, Corbin is at +28 DRS in the other 790 innings of his career, and he’s been at least +4 DRS in every season except 2016. Good pitcher defense is always appreciated.

In terms of his arsenal, Corbin’s an interesting dude. He has a four-seam fastball he primarily elevates against left-handed batters. He has a sinking two-seamer he throws primarily down-and-away to right-handed batters. In this era of big velocity, Corbin’s two fastballs sat right around 91 mph this year. In fact, he had a scary dip in velocity at midseason this year, though it gradually returned. Look: 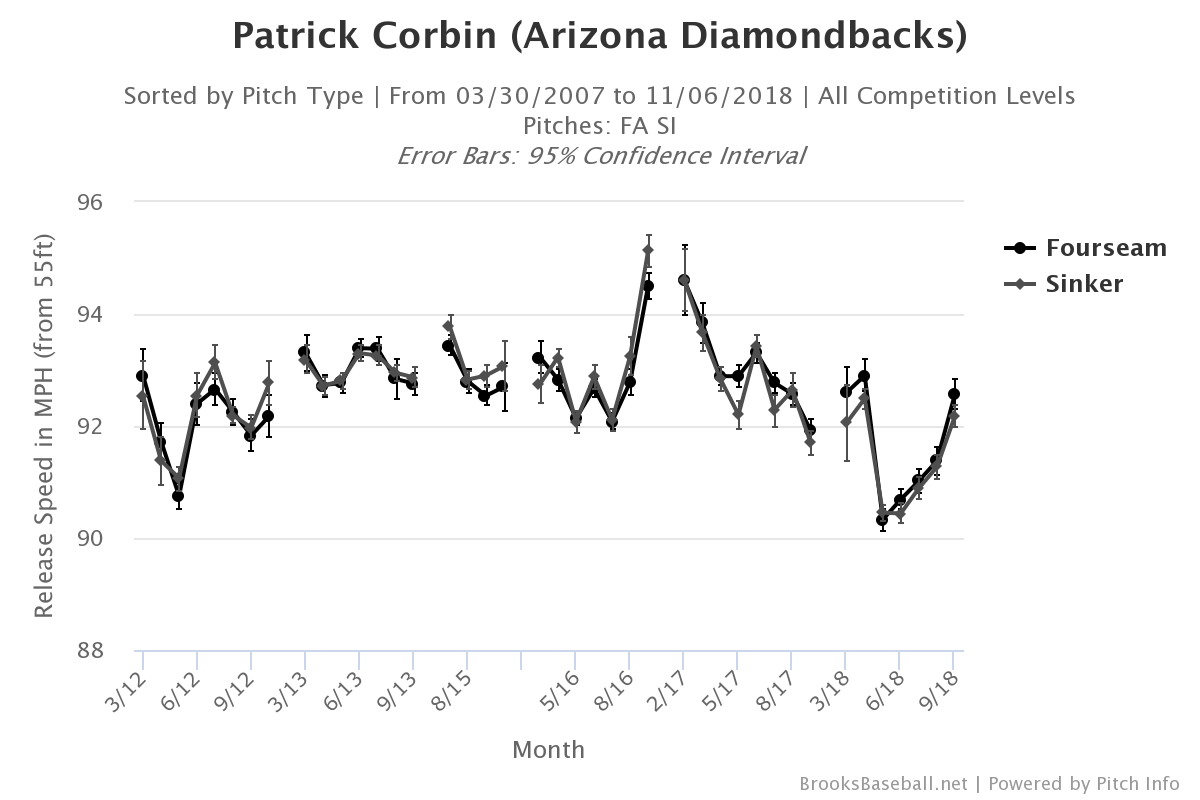 Corbin’s moneymaker is a wicked low-80s slider that he throws a lot. A lot. More than 40% of the time this season. He sweeps it away from lefties and back-foots it to righties. The pitch had a 53.6% whiffs-per-swing rate this year and that is bonkers. At +27.0 runs above average, Corbin’s slider was the single best pitch in baseball this year, and it wasn’t close. (Jhoulys Chacin’s slider was second at +24.5 runs.)

That slider is what Corbin uses to get most of his outs, and he sets it up with the four-seamer to lefties and the sinker to righties. He pitches lefties up with the heater then buries them with the slider down. He pitches righties away with the sinker then throws the slider that looks like a fastball down the middle before it dives toward their feet. Corbin also has a changeup, which he doesn’t use often, and a brand new curveball. He made the curveball up in the middle of an April start. From Bob McManaman:

“I’ve never done that (throw a curveball),” he said. “I’m not sure where that came from. But just throwing that slower breaking ball, the harder one, and just locating my two-seamer has been huge. So is pitching inside when I need to. Just repeating my delivery helped, too.”

The curveball worked well — Corbin struck out eight in a one-hit shutout against the Giants that night — so he kept using it. He uses it against right-handed batters only, which is why I think his success against righties might be sustainable. There’s a new pitch being used. That said, we’ll see what happens when the league adjusts. At least there is some tangible evidence for the improvement, you know?

For all intents and purposes, Corbin is a 4.5-pitch guy rather than a five-pitch guy. He has a changeup, but he doesn’t use it often, so it would be wrong to say he relies on it. Corbin is four-seamer/slider against lefties and nowadays he’s two-seamer/slider/curveball against righties. Here’s some video:

That is a pretty darn good slider, I’d say. It looks like a peak Sabathia slider. Corbin is listed at 6-foot-3 and 185 lbs., so he’s not as big as Sabathia, but he does pitch somewhat similarly. Peak Sabathia was fastball/slider to lefties and sinker/slider/changeup to righties. Corbin’s curveball is a brand new pitch. He’s been throwing it less than one full season. Does it really make that much of a difference for him, that he went from quality starter to stud?

The D’Backs took their time with Corbin and he had a nice long Tommy John surgery rehab. He had surgery in March 2014 and did not return to game action until June 2015, and even then they kept him on a tight leash in 2015. Corbin did not have a 100-pitch outing with his new elbow ligament until April 2016. Arizona took real good care of him. They extended the rehab and brought him back slowly.

Aside from the Tommy John surgery, Corbin has been perfectly healthy throughout his career. Zero disabled list stints or missed starts other than the elbow in 2014 and 2015. Tommy John surgery is a very big deal, obviously, especially for a guy who throws more than 50% breaking balls between the slider and curveball. His arm has already said “I can’t handle this” once and it could happen again. Other than that, Corbin has had no injury problems.

In all likelihood Corbin will secure the largest pitching contract this winter and the third largest contract overall behind Bryce Harper and Manny Machado. It’s a little difficult to predict contract values right now because free agency was so screwed up last year. Here are some contract estimates for Corbin:

Bowden’s contract predictions have been scary accurate the last few seasons. He’s had some misses like everyone else, but, generally speaking, he’s been real close. Anyway, an $18M to $21.5M average annual value is Jeff Samardzija ($18M), James Shields ($18.75M), Rick Porcello ($20.625M), Yu Darvish ($21M), and Jordan Zimmermann ($22M) money. All but Porcello signed their contracts as free agents.

Something in the $20M range seems right to me. I think it’s a foregone conclusion Corbin will get five years. The question is whether some team will step forward and offer that guaranteed sixth year, and what the opt-out situation looks like. You can’t sign a premium free agent without giving him an opt-out clause these days. Opt-out after year two or year three? One opt-out or two? Corbin’s contract could have an interesting structure.

Also, it’s important to note the Diamondbacks made Corbin the qualifying offer. Of course he’s going to turn it down. He’s not signing a one-year deal worth $17.9M. He’s got five times that much money coming his way. The qualifying offer means the Yankees will have to surrender their second highest 2019 draft pick and $500,000 in bonus pool money for the 2018-19 signing period to sign Corbin. Not a big deal. The Yankees get to keep their first round pick.

Oh sure. I wouldn’t expect him to be that good again, but the tools are there for Corbin to be an above-average starter another few years, and that’s what you’re buying. Corbin misses bats — his strikeout rate against non-pitchers was a healthy 28.9% in 2018 — and gets a good amount of grounders, and his slider is a truly elite pitch. I definitely consider it a plus that he showed the aptitude to add the curveball basically on the fly this year.

Corbin grew up in upstate New York and he has not been shy about saying he’d love to one day pitch for the Yankees. “It would definitely be great to play there. I grew up a Yankee fan. My whole family are Yankee fans. My mom, my dad, my grandpa, everybody. Really, every generation of my family has been Yankee fans … I know the Yankees have had some interest in the past, and there were a lot of rumors this winter that got my family excited,” he said in April.

That’s nice to hear, though I wouldn’t bank on Corbin taking a discount to sign with the Yankees. This will almost certainly be his best chance at a huge payday and the “he grew up a fan of the team” angle gets overplayed every year. The Yankees are really good and they have lots of young talent. Selling Corbin on the idea of joining the team shouldn’t be hard. They’ll have to make a strong offer though, and since he’s the best pitcher on the market, the Yankees figure to have plenty of competition.