I’ve got a minor correction to this comment I made the other day about draft eligibility. If a team wants to draft a player than isn’t in the MLB Scouting Bureau database, they have to request a “commisioner number” for that player ahead of time. If no request is made, the player can’t be drafted. Thanks to KLaw for the heads up.

END_OF_DOCUMENT_TOKEN_TO_BE_REPLACED

Joe and Ben are both at the game today, so I’m your host for the afternoon. They’ll get to see the triumphant return of Darrell Rasner, one of the more underappreciated arms in the organization. He’s not flashy and he doesn’t have the overpowering stuff, but he throws strikes and keeps the ball in the park, which is more than say, Bronson Arroyo is doing these days.

Rasner will face perennial punching bag Carlos Silva as the Yanks shoot for their first sweep of a three game series this year. Hopefully facing Silva allows them to keep distancing themselves from that frustrating “score some runs early then go into hibernation” routine.

To make room for Rasner, Brian Bruney was shifted to the 60-day DL (to clear a 40-man spot) and IPK was demoted to Triple-A Scranton (to clear a 25-man spot). IPK’s elgible to be called back up on May 14th, four days after the next time the Yanks will need a fifth starter. So unless someone gets injured between now and then, it’ll probably be Kei Igawa or Steven White on the 10th in Detroit. The Yanks’ patience lasts only 6 games, I see.

Can you hear all the Dodgers’ fans crying bloody murder over Chad Billingsley’s poor start? I sure can’t.

The team’s leader in slugging percentage, LF
Jessica Alba’s baby daddy, SS
The offensive MVP, RF
Godzilla, DH
Thank goodness there’s only 1 year left on his deal, 1B
The guy who kidnapped Melky Cabrera and is playing his place, CF
He won’t hit .150-.213-.230 all year, right?, 2B
The guy that’s hit exactly 36 HR since hitting 36 HR in 2005, 3B
Chad “is this what we’ve come to” Moeller, C

Notes: Looks like Latrell Spreewell needed that money to feed his family after all.

Saber-Scouting has a report on Ivan Nova in this notebook, make sure you check it out. Juan Miranda is the latest casualty, hitting the DL thanks to a shoulder issue. They be droppin’ like flies…

END_OF_DOCUMENT_TOKEN_TO_BE_REPLACED 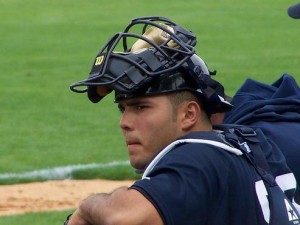 April’s a wacky month. It’s the only time of the year that Nate McLouth can sport a 1.047 OPS, or when Mike Mussina can boast better numbers than Roy Oswalt. Christian Lara played for two teams in a single game and Jay Johnson hit a walk-off double to make himself the winning pitcher, and I can’t help but think that only April can contain that kind of madness.

April has been an interesting month in the Yankees’ farm system, full of surprises and disappointments. You had Eric Hacker’s pitch count ruined perfect game and Brett Gardner launching no-doubt homers. While April doesn’t provide enough info to draw accurate conclusions, it does start to paint a picture of what’s ahead.

Triple-A Scranton
Other than Darrell Rasner, who is now a big leaguer, the story of the month for Scranton has been none other than Eric Duncan. The 27th overall pick in the 2003 draft has had a … let’s say, “rocky” career so far, but it looks like the light bulb may finally be coming on a bit. Even though he’s been forced to play second fiddle to Shelley Duncan and Juan Miranda for playing time, Duncan’s off to a .279-.384-.508 start. I pulling for him and I hope he can sustain it.

END_OF_DOCUMENT_TOKEN_TO_BE_REPLACED

Triple-A Scranton was rained out, they’ll play two tomorrow. Wilson Betemit was supposed to play third and bat leadoff for the first five innings, while Brett Gardner was slotted into the THIRD spot in the order. I can’t imagine Gardner’s gotten more than a handful of at-bats in that spot in his life.

END_OF_DOCUMENT_TOKEN_TO_BE_REPLACED 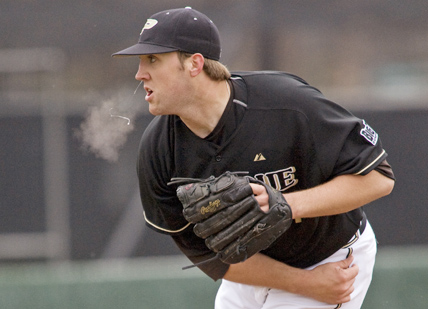 It’s been a while since we talked draft, so here’s some bullet point style draft goodness:

END_OF_DOCUMENT_TOKEN_TO_BE_REPLACED

Not much going on in the minors today, so I’ll keep it short. Triple-A Scranton had the night off, while Austin Jackson went hitless for the third straight game. Jose Tabata is still MIA, and Eric Hacker continued his brilliance for Tampa. Jesus Montero doubled for the fourth straight game, giving him 7 in his last 9 games. Dellin Betances had a good outing, but was outpitched by the 10th overall pick in the 2007 draft.

That about wraps it up, see y’all tomorrow.