As expected, Derek Jeter has been voted in as the starting shortstop for the AL All-Star team by the fans. His double play partner will be Robinson Cano. Masahiro Tanaka and Dellin Betances will also represent the Yankees at the Midsummer Classic. The full All-Star Game rosters are right here.

Jeter will be playing in his 14th All-Star Game and starting at short for the ninth time. His performance this year doesn’t really warrant the selection, but he’s a star of the first order and fans want to see him in the All-Star Game in his final season. That’s what the All-Star Game is all about in my opinion. Tanaka and Betances are obviously very deserving of their selections. They will be the first Yankees rookie pitchers to make the game since Spec Shea in 1947. Congrats to all three guys.

Got some stray links to pass along before the Yankees wrap up their four-game series with the Royals in Kansas City later tonight.

MLB released the updated voting results for the All-Star Game starting lineup yesterday, and Derek Jeter remains the leading vote-getter at shortstop. He’s about 160,000 votes ahead of Alexei Ramirez and is the sixth highest vote-getter in the league overall. There’s no way Jeter belongs in the Midsummer Classic based on his performance, but he’s a megastar and the face of baseball. People want to see him in his final year and that’s what the All-Star Game should be all about.

No other Yankees are leading their respective positions in the voting, though Brian McCann does rank second behind Matt Wieters at catcher. Wieters is currently on the disabled list with an elbow injury and is not close to returning. McCann may end up starting the game in his place. Mark Teixeira ranks fifth at first base while Jacoby Ellsbury, Carlos Beltran, and Brett Gardner rank fifth, eighth, and 13th in the outfield, respectively. The full voting results are right here. Miguel Cabrera, Robinson Cano, Josh Donaldson, Nelson Cruz, Jose Bautista, Mike Trout, and Melky Cabrera are in position to start the game alongside Jeter and potentially McCann.

The Yankees have been using infield shifts to the extreme this season, at least in part due to their range-challenged infield. It’s not just Jeter either. Yangervis Solarte and Brian Roberts aren’t the rangiest of players either. And yet, every game we see balls get by the shift, though that is unavoidable. Balls are always going to get through any defensive formation.

“If they weren’t shifting as much as they have been, things would look even worse. So, it’s not that the shift itself has been ineffective, but the Yankees’ infield defense overall that has been ineffective, with or without the shift,” said Joe Rosales, a researcher at Baseball Info Solutions, to Davidoff. Watching a ball get through the shift is frustrating, but without them, there would be far more balls sneaking through the infield.

I mentioned this in the open thread last night, but, in case you missed it, Mark Teixeira has a fake talk show on YES called Foul Territory. It’s actually pretty funny and the clips came out of nowhere. I’m not sure anyone thought Teixeira is capable of doing something funny. I know I didn’t. He’s always come off as rather business-like and uninteresting, to be honest.

Dan Barbarisi dug into the story behind Foul Territory, which was Teixeira’s idea and a way to help new Yankees feel welcome. It’s not a coincidence the only player interviews are McCann, Ellsbury, and Masahiro Tanaka (one with Roberts is forthcoming). The shows have a general framework but otherwise do not have a script and are ad-libbed. It’s pretty amazing, really. There are two more clips coming (Roberts and Jeter) and Teixeira is open to recording more if the demand is there.

“I wanted a way for the new guys to get broken in, in kind of a funny way—not necessarily hazing, because I’m hazing myself more than anything,” said Teixeira to Barbarisi. “If the fans want (more episodes), we’ll have to give it to them.”

The Wrong End Of The Hard-Hot Spectrum

And finally, ESPN stats guru Mark Simon posted some data on hard-hit balls this morning. Long story short, the Yankees don’t rank very well. They rank 23rd in the league with a .145 HHAV (hard hit average, or hard-hit balls per at-bat) offensively and 26th in the league with a .165 HHAV on the pitching side. The hitters aren’t hitting the ball hard and the pitching staff is allowing a lot of hard-hit balls. That … is a pretty bad combination. Throw in a generally bad team defense and it’s a minor miracle this club is 31-31 after 62 games. It could be much, much worse.

MLB released the first update of the All-Star fan voting this afternoon, and both Derek Jeter and Jacoby Ellsbury are among the top vote-getters at their positions. Jeter has received the third most votes overall behind Mike Trout and Jose Bautista, and the gap between him and the next highest shortstop (Alexei Ramirez) is the largest gap between first and second place at any position. Barring injury, Jeter will start the All-Star Game. I’m sure of it.

Ellsbury is a distant third to Trout and Bautista among outfielders. Carlos Beltran is fourth and not all that far behind Ellsbury while Brett Gardner is further down in 11th place. Mark Teixeira is fifth among first baseman, Alfonso Soriano is fourth among designated hitters, and Brian McCann is second among catchers. Along with Jeter, Ellsbury, Trout, and Bautista, the current voting leaders are Miguel Cabrera, Ian Kinsler, Josh Donaldson, David Ortiz, and Matt Wieters. The current voting results are right here. Voting ends at midnight on July 3rd. Here’s the ballot.

Ugh, this felt so wrong. I mean, yeah, I know there was a chance Mo may not have pitched if a bullpen full of All-Stars couldn’t hold a three-run lead in the eighth. I get that. But I don’t like it. It was a great moment, the two-minute standing ovation and cap tip to the crowd, but man it felt so wrong to see Rivera — who was named the All-Star Game MVP — out there in the eighth instead of the ninth. Jim Leyland out-thunk himself a little too much.

Anyway, the AL won 3-0 because the pitching staff held the NL to just three hits. Jose Bautista had a sacrifice fly in the fourth, J.J. Hardy a run-scoring ground out in the fifth, and Jason Kipnis a run-scoring double in the eighth. Robinson Cano left the game after being hit by a pitch in the first inning but is expected to be fine.

MLB.com has the box score and video highlights while FanGraphs has the WPA Graph. For the first time since 2009, the AL will have homefield advantage in the World Series. That’ll be useful if the Yankees get their act together in the second half. 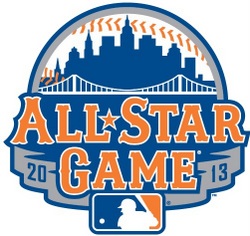 As of right now, things aren’t looking all that good as far as the Yankees making the playoffs this year. They sit in fourth place in the AL East and three back of the second wildcard spot. It’ll be an uphill climb in the second half, that’s for sure.

That said, just in case they do qualify for the playoffs and manage to make it to the World Series, I want them to have homefield advantage. It’s dumb that the All-Star Game determines that, but it is what it is. Those are the rules they have to play by.

The NL has won three straight All-Star Games and, not completely coincidentally, they’ve won the last three World Series at well. Homefield advantage had to help a smidge. It’s time for the AL to get back to dominating this thing, which they did for a long time before these last three years. Here are the starting lineups:

Max Scherzer (AL) and Matt Harvey (NL) are your starting pitchers, and the full rosters are right here. Manager Jim Leyland confirmed yesterday that Mariano Rivera will pitch in the game even if the AL doesn’t have a save situation, so that’s neat. Hopefully they give him a lead to protect in the ninth inning, however.

The game is scheduled to begin at 8:00pm ET and can be seen on FOX. Enjoy. 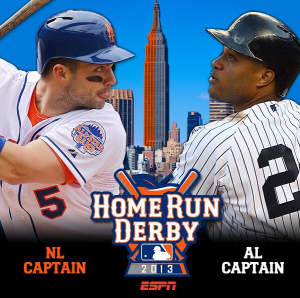 Blue Jays right-hander Steve Delabar beat out David Robertson in the AL All-Star Final Vote, the league announced. It would have been cool to see Robertson become a two-time All-Star, but I’m totally cool with him getting four days of rest next week given that he’s on pace for a career-high workload. Robinson Cano and Mariano Rivera are the Yankees only two All-Stars this season.