For overflow comments only.

As the Yankees and the Red Sox prepare for a battle amid the cold and the rain tonight, both teams are going with some lineup changes. The Yankees, mercifully, have pushed Jason Giambi down in the order while David Ortiz is on the bench for the Sox tonight.

The big story, of course, as is the case every five days is Phil Hughes. The 21-year-old is the youngest Yankee pitcher to face the Red Sox since Jose Rijo in 1985, and Peter Pascarelli in previewing the game sees big things in the future for young Mr. Hughes.

The Red Sox counter with Daisuke Matsuzaka. In three starts this year, Matsuzaka has been the pitcher the Sox thought they were getting last year. He’s 2-0 in 18.1 innings with a 1.47 ERA. He’s struck out 22 and walked nine while giving up just eight hits. The Yankees in the past have hit Matsuzaka hard. So we’ll see if the Sox’s expensive import has turned a new page or simply enjoyed facing the A’s a few times.

Game time is at 8:05 p.m., and we are stuck with the ever-talented Joe Morgan.

Game Notes: The loser of this game will land in sole possession of last place in the AL East but just 1.5 games behind the first place teams. How’s that for a tight division after two weeks of the season?

For some reason, this game sticks out in my mind from last year. We were kind of rolling, leading 5-3 heading into the bottom of the sixth. And then Moose blew it, giving up back-to-back shots to Lowell and Varitek. I also probably remember it because we bombed Schilling that day — or, rather, Jorge bombed Schilling. Of course, Proctor went and blew it some more, and we went on to lose a winnable game.

That was Mussina’s last start at Fenway. We’ll need a much better job out of him today. Hopefully he can keep the Sox hitters as off-balance as he did the Rays hitters last time out. With Wang giving the bullpen a full night off, Moose just has to give us six solid…considering the offense can muster a few runs off Beckett.

And on the mound, number thirty-five, Mike Mussina.

Lock your laptops, folks. Clay Buchholz, he of the stolen laptops (and, yes, a Major League no-hitter), is making his first start against the Yankees tonight. Buchholz had a bad Spring Training and lost his first start of the season.

The Yankees, meanwhile, are countering with their ace. Chien-Ming Wang has looked exceptional this year so far. In two starts covering 13 innings, Wang is 2-0 with a 1.38 ERA. He’s given up 10 hits while walking four and, encouragingly, striking out eight. He’s keeping the ball low and keeping runners off base.

Tonight, though, will be a challenge for Wang. He’s facing a Red Sox team that has, by and large, hit him well over the last few seasons. David Ortiz, currently mired in a 3 for 36 drought to start the season, is 15 for 30 against Wang; Manny Ramirez is 13 for 22; and Kevin Youkilis is 7 for 21. As a team, the Sox hit Wang at a .300/.394/.442 clip and six of the 30 career HRs allowed by the sinkerball specialist have come off the bats of the Red Sox.

The Yankees go with something of a different lineup tonight. Johnny Damon is getting the night off, and the hot-hitting Melky Cabrera will lead off. The game, weather permitting, starts at 7:05 p.m., and we get to experience the drama of a Yankees-Red Sox three-game set all over again.

So Joe Girardi decided to mix things up tonight. That’s good. It’s not a surefire remedy to a slumping lineup, but at least it’s an attempt to get things started. However, I’m not so sure I’m on board with the changes.

First, Giambi and Abreu sit against the lefty. That’s fine and good. As I’ve noted, I wouldn’t mind seeing him sit against lefties a bit more. Giambi hasn’t been doing much of anything, so keeping him on the bench is of little concern.

But Matsui in right field? We better hope no balls are hit to right field with a runner on first. And you can be damn sure a runner on second will take third on even a shallow fly to right. You don’t want to lose Melky’s range in center, but you have to think that a Matsui-Damon-Melky outfield would at least keep baserunners a bit more honest.

Onto the batting order…Jorge hitting cleanup? Normally, this wouldn’t be an issue. But he hasn’t hit a lick this season. At least Cano — batting 7th and behind Jose Molina — has registered a some hits in the past couple of games.

I guess the hope is that this will mix things up enough to get some people, like Jorge, going. To that end I cannot complain. And there are worse things than taking some defensive risks for a single game. So despite my qualms, there’s certainly some virtue to what Girardi’s trying to do here.

And on the mound, number forty-six, Andy Pettitte 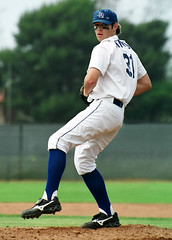 No, we don’t have any answers on the great DL debate. PeteAbe says that it might actually be Morgan Ensberg who hits the DL. Something about a “mysterious knee injury.” Jorge’s injury isn’t being considered serious enough for a DL stint, and there is no further word on Derek Jeter.

Clearly, much of this can change in the 45 minutes leading up to the game. The Yanks have to make a roster move in that interim, and I’ll update this post once I get word, probably from Abraham or Feinsand.

Update: Yep, it’s Ensberg to the DL. And I’m apparently unfamiliar with Central time. The game starts at 8, not 7.

And on the mound, number thirty-one, Ian Patrick Kennedy.

Kinda strange that Molina is hitting ahead of Melky, eh?

Photo of Ian Kennedy hurling while in high school courtesy of flickr user Miro-Foto. Click here for a bigger version and here and here for a few more shots of the Yanks’ righty back in the day.

After Mike Mussina’s outing last night in which he tied Bob Gibson for 44th on the all-time win list, a message mysteriously appeared on Mussina’s white board in the locker room. The note, according to Dan Graziano, read: “Thanks ESPN for the 4:00 a.m. arrival and day game the next day.”

For Mussina, it doesn’t really matter. He pitched last night and doesn’t throw again until the Yanks get to Boston. But it’s hard not to feel sympathetic for the Yankees. Because MLB wouldn’t tell ESPN that they could not have last night’s Yankee game, the Yanks were stuck playing a 7:05 p.m. game on get-away day. They had to fly to Kansas City after the fact and play a day game today. Had yesterday’s game been at 1:05 p.m. as originally planned or had today’s game been set for 7:05 p.m., everything would have been fine.

The Yankees aren’t making excuses for themselves. “It’s difficult, but it’s not something you don’t expect,” Girardi said. “When I played here, we did it a lot. It’s just part of the baseball life. You’ve got to be resilient and you’ve got to go through it, and there are no excuses.”

Even if there are no excuses, the Yankees are facing a scheduling fight this month. Because of the Pope’s trip to New York, 18 of their next 20 games are on the road, and they have one day off — on April 21 — this month. The last thing they need are day games on the road after night games at home. Either way, we play today; we win today.

Mister Hughes pitches today for the Yanks. Watch that velocity. The sky might fall if he’s not throwing fast enough. With Hughes on the mound, I’d be remiss not to mention the Big Three K Craniosynostosis pledge drive. Please consider donating if you haven’t already.

Game Notes: Jeter out; Giambi in. Derek is day-to-day and could miss up to a week, but for now, the Yankees are saying he won’t land on the DL. An MRI showed a mild strain. A-Rod remains at third base.