Background
Sublett grew up in Wichita, KS, where he starred as both a hitter and pitcher for Northwest High School. Sublett lettered all four years, and batted .468 over his high school career. He also throw a complete game one-hitter with 14 strikeouts against rival Southeast, helping the Grizzlies to the state tournament. He was named the team’s MVP and First Team All-State in 2002 and 2004 (his sophomore and senior years), and also earned First Team All-City honors from 2002 to 2004.

END_OF_DOCUMENT_TOKEN_TO_BE_REPLACED

This profile goes out to Nick-YF, who won a cheesy little contest a few weeks ago.

Background
Romine was raised by a baseball family in El Toro, CA, an Orange County suburb. His father Kevin was a reserve outfielder for the Red Sox from 1985 to 1991, amassing a .251-.306-.325 line in 331 career big league games. His older brother Andrew was Dustin Pedroia’s successor at Arizona State, and had a respectable 3-yr career as the Sun Devil’s starting shortstop. He was drafted by the Angels in the 5th round of this year’s draft.

END_OF_DOCUMENT_TOKEN_TO_BE_REPLACED 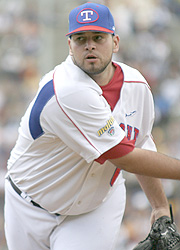 Background
Albaladejo was born and raised in San Juan, Puerto Rico and became the first player ever drafted out of Colegio Janil High School when the Giants selected him in the 34th round (1021st overall) of the 2000 draft. Albaladejo didn’t sign, and instead headed to Miami-Dade College, a 2-yr institution. After a soild but unspectacular year with the Sharks, Albaladejo re-entered the draft pool in 2001, and was taken by the Pirates in the 19th round (564 overall). He signed with the Bucco’s in the days following the draft.

END_OF_DOCUMENT_TOKEN_TO_BE_REPLACED

Background
McAllister grew up just outside of Peoria, IL, in the small suburb of Chillicothe. His father Steve is the Central Region scouting supervisor for the Diamondbacks. McAllister was a star in both baseball and basketball while at Illinois Valley Central High School, but it was clear from the get-go that his future was on the diamond and not the hardwood.

END_OF_DOCUMENT_TOKEN_TO_BE_REPLACED

Background
Born in San Antonio, TX, Suttle’s family resides 30 miles northwest in the small surburban town of Boerne, TX, best known for the landmark Supreme Court case The City of Boerne vs. Flores. Suttle, who prefers to go by Bradley, had a dynamic high school career as a two-way player at Boerne High, helping the Greyhounds go a combined 100-30 during his 4 year career, which included reaching the 4A State Championship Title in 2004 (his junior year). At the plate, Suttle scored over 115 runs, and racked up over 60 extra base hits & 120 RBI in his career, while striking out 411 batters in 256 innings on the mound.

END_OF_DOCUMENT_TOKEN_TO_BE_REPLACED

Background
Born and raised in Lake Charles, LA, Angelini attended budding baseball powerhouse Barbe High School. Even though he’s a natural shortstop, Angelini played third base for the Buccaneers his junior year in deference to the incumbent Josh Prince. Once Prince graduated (he went on to play sparingly for Texas before transferring to Tulane) it paved the way for Angelini to take over full-time shortstop duties.