It’s the moment we’ve all been waiting for: Time for the unveiling of the post-season roster.

As you may have guessed, Ron Villone is not on the roster. The gods are rejoicing. The Yanks, however, are going with no lefties in the pen. Filling the last spots are Jose Veras and, more impressively, Ross Ohlendorf. Torre really liked what he saw from Ohlendorf down the stretch. I did too. I see big things for this kid next year.

Meanwhile, as we noted yesterday, Bronson Sardinha is on the roster, but Chris Britton, contrary to what The Post reported, is not.

Here’s your Game 1 roster and line up courtesy of Peter Abraham. All of you Melky lovers will be happy to see he’s playing. Shelley Duncan, however, is on the bench and not in the lineup against a tough left. I wish Torre had gone with Duncan:

Starting Pitchers
Andy Pettitte – Only lefty on the ALDS roster
Roger Clemens
Mike Mussina
Phil Hughes – Should be starting game 4. No word on that yet.

Today really sucks. Everywhere else, the playoffs begin. The Red Sox face the Angels; the Rockies and Phillies square off; and the Diamondbacks and Cubs begin their battle. But the Yankees – the only playoff team in 2006 to make it in 2007 – have to wait another 24 hours before they begin a thrilling set against the Indians.

So powered by a pretentious sentence right here, on to the predictions:

END_OF_DOCUMENT_TOKEN_TO_BE_REPLACED 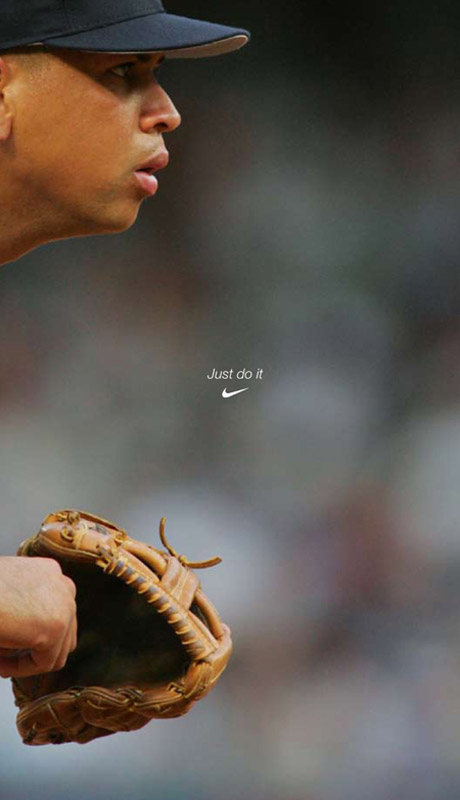 Yesterday evening, I received an e-mail from an assistant account executive working on a Nike campaign. In an attempt to drum free advertising – it worked here and here and, of course, right here – Brandon wrote to me about the 80-foot-tall billboard of Alex Rodriguez going up today at the corner of 34th St. and 7th Ave.

Now, that billboard, shown above, is pretty huge. And it’s pretty much Alex Rodriguez in your face just in case New York needed a reminder that A-Rod is playing in October again. The billboard exhorts the Yankees “Just Do It” this October. But is that encouragement for the team or a disgusted plea of a fed-up fan base? Really, just do it already, A-Rod.

Meanwhile, in The Times, Tyler Kepner looks at the expectations resting on A-Rod’s shoulders this postseason. A-Rod, we all know, hit .314 this year with 54 home runs and 156 RBI (or one every 9.1 innings this season).

Kepner’s piece runs over familiar ground. The rest of the team has to put A-Rod in a position to succeed; he’s working harder this year and ignoring the criticism; he’s laughing off mistakes and not letting every little thing get under his skin; he’s not going to change his hitting approach in October; etc., etc., etc. It’s something we’ve heard ad nauseum this year.

If that’s not enough for you, then scoot on over to ESPN.com where the Worldwide Leader has just unveiled a Howard Bryant-penned missive on Alex Rodriguez. Entitled The King of Gotham? the piece is a challenge to Alex Rodriguez. Rise to the occasion, Bryant says, and bring home the gold to New York. The world will be yours.

So here are again in October, and the attention is squarely on A-Rod. Like or not, A-Rod has to follow up his 54-home run season with a stellar October. The Yanks could lose in the first round, but if A-Rod hits, he will bear no weight for another early exit from the postseason.

Is this fair to A-Rod? Of course not, but that’s the price he has to pay for a $25-million annual salary. You can bet this year that A-Rod won’t get dropped from the four-hole. It’s been his slot all year, and Joe Torre isn’t about to mess with success.

Once a highly-touted Yankee prospect, Bronson Sardinha has seen his stock fall over recent years. An influx of better prospects and some poor numbers by Sardinha at higher levels contributed to this fall.

But this year, the Yanks sent Sardinha back to AA for a few games, and he excelled. He hit .429/.484/.732 and earned himself a September call-up. Now, he’s joining the big league team in October, according to The Honolulu Advertiser.

Because Andy Phillips went down with an injury, the Yanks have the option to replace him on the postseason with someone on their 40-man. Sardinha wins that honor. He will be, in effect, the 25th man off the bench in the playoffs. The Yanks will go with a bench of Shelley Duncan (more on him later), Jose Molina, Wilson Betemit, some mix of Jason Giambi and Doug Mientkiewicz and now Bronson Sardinha.

It will be interesting to see how, if at all, Sardinha is used in games. I could see him coming in as a late-inning replacement, and with Matsui’s knees barking a bit, Sardinha becomes outfield insurance as well. In 11 plate appearances this month in the Bronx, he was 3 for 9 with 2 walks and 6 runs scored. All in all, having him on the roster isn’t a bad move.

The Yanks drew the short straw on this one:

How far did Brian Bruney fall?

A year ago, he pitched in three of the four ALDS games. Yesterday, the Yankees told him to go home, opting to not include the right-handed reliever around like they did with Ross Ohlendorf, Chris Britton and Jose Veras. (sic)

“I was shocked,” Bruney said.

Never mind the sentence in that quote that isn’t English. That’s The New York Post for ya.

Instead let’s focus on the good news: After six months of trying, we finally got the Yankees to recognize that Chris Britton is better than Brian Bruney!

Inexplicably, Brian Bruney threw 50.0 innings for the Yanks this year. His 4.68 ERA isn’t terrible unti you consider the 10.61 ERA he’s sported since the beginning of August. He was sent down to the minors to work on his command and still managed to sport a K:BB ratio of nearly 1:1 this season. He didn’t show a willingness to work on his pitching but did sport a nifty bad attitude.

So as information about the postseason roster trickles out, at least we won’t be subjected to Brian Bruney in the postseason. No word yet on Ron “I let all my inherited runners score” Villone yet.

Sean Henn drew the short straw for today’s game, and as Yankee fans, who cares? Sure, it would be nice for Robinson Cano to drive in 3 runs on Sunday and for Bobby Abreu to get that elusive 100th RBI, but in the grand scheme of baseball, the Yanks’ next meaningful game isn’t until Thursday.

That day, the Yanks will play their first postseason game in Cleveland since the 1998 ALCS. From those two teams, only Kenny Lofton, Derek Jeter, Jorge Posada, Andy Pettitte and Mariano Rivera remain (or have returned to) the same teams they were on then. Unbeknownst to me, Ron Villone threw a few innings on the 1998 Indians but wasn’t on the playoff roster. (Hear that, Joe? He was not on the playoff roster. Take a lesson.)

The Yanks got a bit lucky with the playoff schedule as Boston picked the long series. While this may limit Joba Chamberlain’s availability and otherwise tax a weak Yankee bullpen, by playing the short series, they won’t have to face C.C. Sabathia and Fausto Carmona twice each. Sabathia would go twice only if the series runs to five games.

The schedule and pitching match-ups follow with game times to be determined:

Let the fun begin, and feel free to discuss today’s game here once 1:35 p.m. rolls around.