Nike, one of Derek Jeter’s long-time sponsors, put out a new commercial with fans, celebrities, and athletes paying tribute to the Yankees captain: 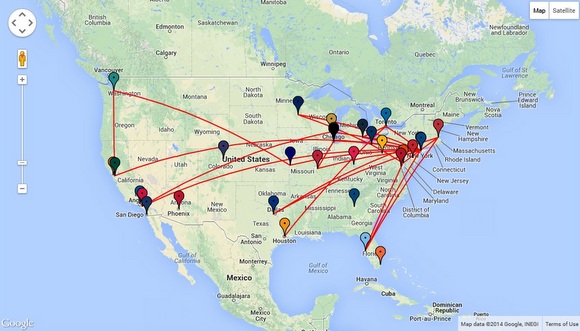 Daren Willman at Baseball Savant put together a neat collection of maps looking at how far each team will travel in 2014. The Yankees, who only have two straight shot coast-to-coast flights this season (one is followed by an off-day), will travel 28,001 miles this year, the tenth fewest in baseball. The Orioles (24,177) and Blue Jays (27,739) have easier travel, the Red Sox (32,919) and Rays (33,856) slightly tougher travel.

Which team will travel the most this season? Robinson Cano’s isolated Mariners, of course. They’re 700+ miles from the closest MLB club. Cano and his teammates will travel 51,540 (!) miles this year, almost double the Yankees. The conveniently located Cubs will only travel 22,969 miles this summer, the fewest in baseball. The average distance traveled will be 33,141 miles. Good to be on the East Coast, eh? 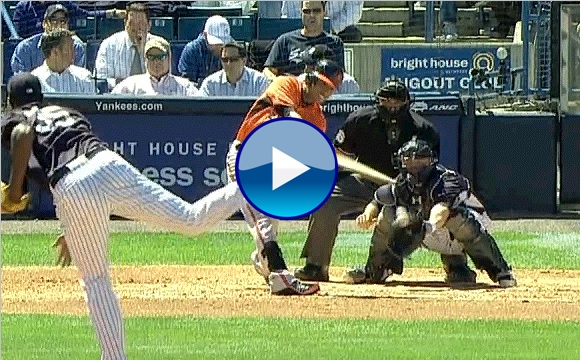 Right-hander Michael Pineda made his first start and second appearance of Spring Training this afternoon, throwing 2.2 scoreless innings against the Orioles before hitting his pitch count. He struck out five, walked one, and allowed three hits (one bloop, one grounder with eyes, one infield single) while throwing 27 of 48 pitches for strikes. His fastball was anywhere from 88-92 on the YES Network gun and he was almost decapitated by a Delmon Young line drive (GIF). That was kinda close.

Pineda was good but I thought he was obviously rusty. David Cone noted during the broadcast that Pineda’s fastball would cut every so often, meaning his mechanics were a little off. When he missed, he missed down in the dirt rather than up in the zone or over the plate, so that was good. Most importantly, it looked everything was coming free and easy. Pineda wasn’t laboring or overthrowing or anything like that. He was just letting it fly. The rust was obvious and hopefully he shakes that off as camp progresses. Considered he missed nearly two full years following shoulder surgery, Pineda looked strong today.

There are more GIFs after the jump. If the mouse-over feature isn’t working for whatever reason, you can see each GIF here: one, two, three, four, five, six, seven, eight, nine.

END_OF_DOCUMENT_TOKEN_TO_BE_REPLACED 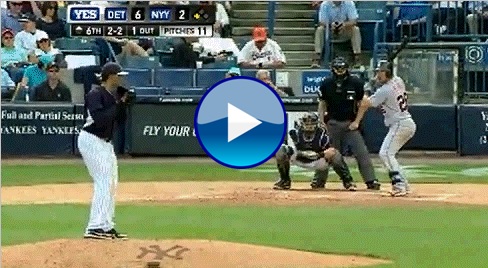 Right-hander Jose Campos, the Yankees’ 15th best prospect, made his spring debut against the Tigers on Wednesday afternoon after being brought along slowly earlier in camp. The 21-year-old pitched around a leadoff double in his inning of work, striking out one and getting both a ground ball out and a fly out.

By my unofficial count, Campos threw eight of his 15 pitches were strikes. His fastball sat anywhere from 89-93 mph on the YES Network gun and he only threw a handful of sliders and changeups. I’d say fewer than five non-fastballs total. It was a short look but Campos was solid. Better than Manny Banuelos in his spring debut, that’s for sure.

This wasn’t the most GIF-able outing, but there are two more after the jump if you’re interested. You have to mouse over each GIF to get it to animate now, as you can see. If that isn’t working for whatever reason (new feature, working out the bugs, etc.), here are each of the three GIFs: one, two, three.

END_OF_DOCUMENT_TOKEN_TO_BE_REPLACED

It didn’t go particularly well, but left-hander Manny Banuelos made his first spring appearance of the year this afternoon. He has missed nearly two full years following a pair of elbow injuries (bone bruise and Tommy John surgery). The first three batters he faced reached base, including a double by Jose Altuve (GIF) and a three-run blast by Chris Carter (video). Banuelos settled down to retire the next two batters before reaching his pitch count and being lifted.

I unofficially had Banuelos at eleven strikes and nine balls in the 20-pitch outing. He threw almost all fastballs with a handful curveballs but no changeups, his trademark pitch. Erik Boland says a scout had him at 92-94 mph with “no reason to think he can’t rebound” from the injuries. Banuelos was a little wild but that isn’t too surprising after missing two years. Hopefully he throws a few more innings in camp and fares a little better. Either way, the Yankees have already said he’s all but a lock to start the season in Triple-A. Makes sense.

There are a few more GIFs after the jump. As you can see, the camera angle during the broadcast was just awful. The center field camera must have been out in the parking lot somewhere. You can click each GIF for a larger view.

END_OF_DOCUMENT_TOKEN_TO_BE_REPLACED

As expected, Masahiro Tanaka made his Grapefruit League debut this afternoon, allowing a pair of bloop hits (on 0-2 fastballs) in two scoreless innings. He struck out three, including one on that nasty splitter above. Considering it was his first outing of the year, Tanaka looked pretty good. I’m not kidding when I say you could hear the camera clicks with every pitch.

Bunch more GIFs after the jump. Sorry about the quality, HD was in and out on MLB.tv for me.

END_OF_DOCUMENT_TOKEN_TO_BE_REPLACED

As expected, Derek Jeter discussed his decision to retire following the 2014 season during a press conference in Tampa this morning. He said he wanted to make the announcement months ago, but people advised him to wait just to make sure he didn’t have any second thoughts. Also, the announcement was made on Facebook because Jeter wanted to draw attention to his Turn 2 Foundation. Here’s the video: