Joba’s pretty good, eh? I wonder if he’ll be our version of Francisco Rodriguez circa 2002. He could really be that big of a difference-maker.

It’s 3-0 Orioles before the Yanks even have a chance to come to bat. Chien-Ming Wang has picked a rather bad time to forget how to pitch.

Over at the Worldwide Leader, Jeff Pearlman has penned a Page 2 apology to Joe Torre. Here’s the entire column in a nutshell:

A know-it-all bozo on ESPN.com’s Page 2 opines that the Yankees should save their season by firing Joe Torre, then watches in amazement as New York’s manager guides a severely flawed team back into the pennant race.

To get this out of the way (not that I have any reason to think he’s reading my work): I would like to apologize to Joe Torre for a completely wrongheaded column that never should have been written. It was dumb. Beyond dumb.

As you can imagine, Pearlman goes on to shower Torre in accolades for guiding the Yankees through the thick and thin en route to a pennant race right now. As Yankee-mania heats up and the Red Sox start to feel the pressure of a four-game lead that was once fourteen, we’ll be seeing a lot of this. We’ll see columnists extolling the virtues of Joe Torre and praising him for a job well done as he guides a team that struggled at the beginning of the season to the playoffs.

But really, let’s not get too far ahead of ourselves. Last I checked, Joe Torre was still responsible for, according to these guys, six losses this year. Six losses, by the way, would give the Yanks a two-game lead in the East. By my count, Torre then is still on the hook for the Yanks’ having to play catch-up all summer. (Yes, I recognize the Yanks may have still gone 0-6 in those games, but Torre’s moves were fairly inexplicable at the time.)

Meanwhile, Brian Cashman was forced to trade away members of the Yankees at the trade deadline because the front office was concerned that Torre was using them as a crutch. Scott Proctor and to a greater extent Miguel Cairo were exiled from the Yankees because Torre kept insisting on deploying them in high leverage situations. That is not the sign of a manager with a full vote of confidence.

Now, you can look at this and say I’m being too critical. You’re probably right. Torre’s can a better job of late of managing the bullpen now that Kyle Farnsworth, Brian Bruney and Scott Protor are either in Joe Torre’s doghouse or gone from the team, but I prefer to thank Mariano Rivera for that move.

To his credit, Torre has been very good at getting the most of his team. Bucking his past trends, he’s entrusted the centerfield job to Melky Cabrera. He’s balanced at bats between Johnny Damon and Jason Giambi. He’s stuck with Andy Phillips at first base. So, yes, Torre gets some credit.

But let’s not get too far ahead of ourselves. The way the Yanks are playing, they don’t need a manager right now. And we don’t need to gloss over Torre’s faults to the detriment of the Yankees.

Ben was digging through some stats earlier and noticed that the pundits over at Sons of Sam Horn have managed to grab the Baseball-Reference.com sponsorship for Phil Hughes’ player page. It reads:

Will be cubically transformed soon. Sincerely, The Fans of Phil Hughes’s favorite baseball team; the Red Sox and their fans at SoSH.

Ouch, that kinda stings. We all think of Phil as our own; we’ve watched him grow from a little-known high schooler to a soon-to-be frontline pitcher, but the fact is that Hughes was a Red Sox fan before stepping over to the Dark Side, thanks to his family roots in Rhode Island.

Sawx phenom Clay Buchholz might be getting the call to pitch one end of Boston’s doubleheader Friday, and we could do something underhanded like sponsor his page with a message like “He stole 29 laptops from his high school and tried to sell them,” but nah, we won’t stoop to that level.

Reminding us of Phil’s Red Sox allegiance stings, but not as bad as potentially blowing a 14.5 game division lead. 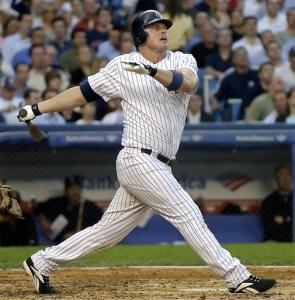 Back when Jason Giambi was placed on the DL in early June, many Yankees fans turned on him. That they started winning some games at that point only made things worse. People were even saying ridiculous things, like Miguel Cairo being better for the team than Giambi. He hadn’t done a whole lot lately — of course, because of his injury — so people began to write him off, as Yankees fans are wont to do.

In 10 plate appearances since returning, Giambi has four hits, two of which were freakin’ crushed. On one of the six outs he’s made, he hustled his fat ass down the line and beat out a double play ball — one that he certainly wouldn’t have beat out last season.

The only question now is how to get him into the lineup regularly. Damon has been hitting .291/.395/.398 over the past month, which is just fine for a leadoff hitter — actually, it’s almost ideal. The power comes from other outlets, making Damon’s only job getting on base and swiping the occasional bag.

So we have the question: Do you play Giambi less, thereby reducing his potential impact? Or do you play him at first and hope his offense outweighs his defense?

In the 24th round of the amateur draft this year, the Yanks made a Hail Mary selection when they announced their pick of Greg Peavey. Considered one of the top young arms in the nation, Peavey was impressive this summer while pitching in a summer league near Oregon State’s campus in Corvallis, and he says that he was impressed with the Yanks’ offer. However, Peavey has opted for college over the pros for now. In two years, when Peavey is draft-eligible again, expect him to go higher than he did this year.

Due to a busy weekend, blogging was light. So I have a post relating to Saturday’s game for you here. We’ll talk about yesterday’s win later.

Watching Mike Mussina go 4-0 over his last four starts, I was struck by how utterly the same Mussina seemed on the mound. All of a sudden, with the same stuff that had been getting hit hard earlier in the year, Mussina had hitters flailing at pitches. Over his last 25.1 innings, Mussina has an ERA of 2.84, but he hasn’t found miles on is fastball. I wondered what had changed.

A quick look at the numbers revealed some interesting trends. First, I thought, maybe it was an issue of hits. Was Mike Mussina doing a better job of getting outs? Over those 25.1 innings, Mussina has allowed 29 hits or 1.15 per inning. Over his previous 88.2 innings, Mussina had allowed 1.14 hits per inning. So the answer wasn’t to be found in hits.

Maybe home runs had been Mussina’s bugaboo this year. Moose has surrendered 2 longballs over his last 25.1 innings or 0.7 per 9 IP. Previously, Mussina had given up home runs at a rate of 1.12 per 9 IP. That’s a change but it hardly counts for a change in ERA from 4.97 over 88.1 IP to 2.84 over his last four starts. Something else must be at work here, I thought.

As the game unfolded on Saturday, I realized what has spurred on Mike Mussina’s success, and it is a lesson in pitching and Three True Outcomes. For the third start in a row on Saturday, Mike Mussina had not walked a batter. Recently, Mussina has issued 0.7 BB per 9 IP. Prior to that, he had issued 2.23 per 9 IP.

Meanwhile, on the strike out front, Mussina over his last 25.1 innings has 19 Ks or 6.75 per 9 IP. In the 88.2 IP prior, he had a K/9 IP of 5.48. Ah-ha! Here we have the keys to Mike Mussina’s success. He has allowed fewer home runs while cutting down on the number of baserunners per 9 IP by 1.5. He’s keeping balls out of play by striking out more hitters per game. Thus, he has pitched significantly better of late.

Well, the Yankees and Mike Mussina have had the distinct pleasure of facing the Royals, the White Sox, the Royals again and the Indians. Mussina is, in other words, beating bad and impatient teams with struggling offenses. He’s beating teams that strike out a lot, that haven’t, of late, been hitting a lot of home runs and are among the worst in the American League at getting on base.

Mussina’s next game will be the big test. He’s due to face Detroit on Thursday. In the Tigers, he’ll face another struggling team but this is one team that is adept at putting the ball in play and hits for power as well. If Mike Mussina can mow down the Tigers this week as he did the Indians on Saturday, then I’ll be a believer. For now, I’ll just enjoy the ride and optimistically hope for the best from a pitcher of which I am always skeptical.