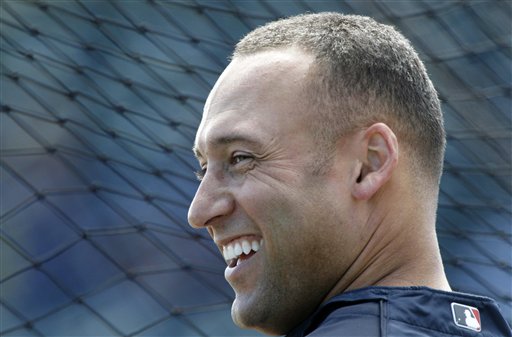 As the season draws near, the big story isn’t whether or not the team can successfully defend their World Championship, but how the Derek Jeter’s contract situation will play out after the season. And they say Yankee fans are too focused on the now. We’ve already discussed it ad nauseum here, addressing issues like the possibility that Jeter will ask for six years, or an ownership stake, and that extending him now would be a mistake. Mike Vaccaro came up with another angle today, saying that the Captain’s next contract has already cost them a shot at their shortstop of the future.

As you probably remember, the Yanks had their more than fair $8.5M offer to Cuban shortstop Adeiny Hechevarria rejected over the weekend because the 20-year-old had concerns about how he would fit into the organization with Jeter entrenched at his favorite position. He instead headed north of the border to Toronto, who paid him $10M and offered him a crystal clear picture of how he fit into the organization’s future.

Of course, in the grand scheme of things I doubt Jeter’s presence mattered. Chances are Hechevarria would have taken the extra $1.5M from the Blue Jays regardless of who the Yankees had at shortstop. After improving his defense considerably the last two years, there’s no immediate need to move Jeter off of the only position he’s ever played as a professional, so the need for a fill-in is lessened, at least at the moment. There’s always the chance of a Roberto Alomar fall from grace, but it would be a shock to everyone if things played out like that, Jeter and the Yankees included.

I’m not going to fret about Jeter’s inevitable extension costing the Yanks a chance at Hechevarria, there’s more than one way to find a shortstop of the future after all. And besides, this was a rather unique situation. Players with the kind of profile and hype as Hechevarria are the exception, not the rule. The organization seems to be making nothing but smart baseball decisions these days, so I”m confident they’ll find a more than adequate way to replace Jeter at short when the time comes. Whether that’s through the draft, or a temporary stop-gap solution, or a big money free agent signing, I don’t know. I would be surprised if they get caught off guard and end up having to run Ramiro Pena out there 150 games a year.

The Yankees and Jeter will reach an agreement on a new contract after the season, I’m 99.9999% sure of it, and chances are they’re going to overpay him (possibly grossly) for past contributions. It’s not an ideal situation, but the Yankees are one of the few teams able to overpay a homegrown star like that, plus the negative PR that would come from anything but a new deal would be staggering. Jeter knows this, and he also knows that New York is the best place for him, both in terms of marketability and where he is at this point of his career.

Via Jon Heyman, the Yankees offered Cuban shortstop Adeiny Hechevarria an $8.5M contract, but he instead took $10M from the Blue Jays. We don’t know how that money would have been distributed – how big was the signing bonus, what was the year-to-year breakdown, etc. – but the largest signing bonus the Yankees have ever given to a young prospect (meaning Hideki Irabu and Jose Contreras don’t count) was the $3.35M they gave Andrew Brackman two-plus years ago. The Red Sox gave Jose Iglesias a $6M bonus, and I’d have to think Hechevarria would have cleared that.

You can always tell how much a team likes a player by how much they’re willing to pay him, and clearly the Yanks’ had a ton of interest in the rail-thin Hechevarria. Can’t blame them for not trying, that’s a tremendous offer.

Via GAK3, Cuban shortstop Adeiny Hechevarria is close to signing with the Blue Jays, who will pay him $10M. The 20-year-old reportedly didn’t like his chances of playing shortstop for the Yankees anytime soon, so he instead went with the Jays. We heard the Yanks were favored to sign him just  few days ago.  That’s a lot of cash for a guy who’s basically all projection, but good for him.

Via GAK3, the Yankees are among the favorites to land Cuban shortstop Adeiny Hechevarria, and are battling four other teams to sign him. We heard they were heavily interested in him over the weekend, and he’s apparently been working out at the team’s complex in the Dominican. One scout compared him physically to Alfonso Soriano, which tells us that he’s rail thin and absolutely nothing about his game.

If you were Hechevarria, why would you come to the Yankees? Derek Jeter is going to re-sign after the season and isn’t going anywhere for a while, and Robbie Cano is under contract for another few years. Doesn’t really make sense, playing time wise.

Via MLBTR, the Yankees are heavily interested in Cuban shortstop Adeiny Hechevarria, who is now free to sign with any team after being unblocked by the OFAC. Joe told us everything we need to know about the 19-year-old last month, and it’s likely that he’ll receive a larger bonus than the $8.2M the Red Sox gave the all-glove/no-hit Jose Iglesias this offseason. Obviously, the Yankees need to start thinking about a shortstop of the future, but that’s a lot of scratch for a teenager, especially when you consider the track record of Cuban imports.

For some Cuban defectors, becoming cleared for MLB free agency can happen quickly. We saw that with Aroldis Chapman, who defected in early July, established residency in Andorra in September, and was granted free agency less than a week later. For other players it takes a bit longer. As George King of the Post reports, Cuban prospect Adeiny Hechevarria is about a week away from clearing the OFAC, which is still verifying his age, identity, and residency. Once that happens, word is the Yankees will be involved heavily.

The Cuban Ball Players blog has a bit more information about Hechevarria — including the spelling of his name, which I trust from that site, since it’s dedicated to Cuban players. Then again, the blog has him listed as 19 years old, while King’s article has him listed as 21. So we can take any information on the kid lightly at this point. In any case, the blog says that while Hechevarria posted a lower batting average than fellow Cuban Jose Iglesias, who signed with the Red Sox for $8.2 million last year, he hit for more power, especially the opposite way. Check out this video:

Will he stick at shortstop, though? Here’s an interesting quote from King’s article:

“He is a very good athlete and runs real well,” the scout said. “I don’t see him as a shortstop, I think he has a chance to be a center fielder in the mold of B.J. Upton. His throwing actions at short are kind of long.”

That doesn’t. This prospect won’t come cheap — probably somewhere around Iglesias’s deal — but it sounds like he might be worth the gamble, given his power and all-around athleticism.

Oh, and I don’t think we need to worry about his range to his left. The web-gem comes at the 4:58 mark.