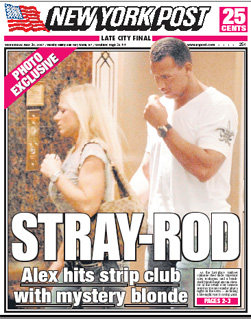 Anything to bust out of a slump I guess!

Somewhat lost in the Bobby Abreu/Robinson Cano debacle of late has been the performance of Alex Rodriguez. While A-Rod’s stats overall â€” .329/.407/.714 with 15 HR and 39 RBI â€” are still exception, his season has been some of a Jekyll and Hyde performance so far.

So what’s the real Alex Rodriguez? For all of his recent struggles, A-Rod is still on pace for 68 HR and 176 RBI. If he can rediscover his power stroke soon, things will be looking up for A-Rod. He just missed in Seattle, driving two balls to the wall in the deepest parts of a vast outfield. Are we about to see another HR tear from A-Rod? It couldn’t come at a better time.

I know that these guys are rooting for April Alex to return and carry the Yankees through to the end of May. I fear that if his stroke doesn’t come back, the Yankee boo birds may return, making this summer a long one from Alex as that opt-out clause comes do.

It’s never a dull moment around these Yankees, eh?

Newsday’s newest Yankee beat writer Kat O’Brien has the story on A-Rod. Said the super-human third baseman, “I want to stay in New York, no matter what.” If the image-conscious A-Rod is serious and doesn’t mind giving up a few bucks to stay in pinstripes, that’s the best news I’ve heard since, well, yesterday when the Yanks announced Hughes as tomorrow’s starter. This April has shown us all that Alex Rodriguez is the biggest piece to the Yankees offense. They gotta keep him.

I found this tidbit inside Olney’s blog today (Subscription required):

Wow. Just wow. Three-run, walk-off home run with two outs in the bottom of the 9th. Is this guy on fire or what?

Luis Vizcaino, the only Yankee with a record, said it best. According to Tyler Kepner of The Times, it was too cold for pitchers to grip their breaking balls. And it showed.

So while Steve Lombardi accurately summed up last night’s game, much like Mark McGwire, I’m not here to talk about the past. Instead, let’s see how reporters summed up this game.

As the lovely montage above shows, the New York tabloids seemed fit to lay the blame squarely on Alex Rodriguez’s much-maligned shoulders. But that wasn’t the worst. Note this excerpt from the AP’s game summary:

Alex Rodriguez had a great opportunity to turn Yankees fans in his favor.

Once again, he flopped….

A-Rod, who is 4-for-41 (.098) without an RBI in his last 12 playoff games dating to 2004, tossed his bat aside in disgust after the popout and muttered to himself as he waited for a teammate to bring out his cap and glove. Often booed at Yankee Stadium for failing to deliver in crucial situations, he heard plenty of catcalls again — even from a crowd diminished by the cold.

Such drama for the second game of the season. A-Rod completely and utterly flopped. And let’s not forget to mention his post-season struggles even though it’s April and the regular season. That’s sound reporting and writing right there.

To this, I say, “Enough!” Enough dumping on Alex Rodriguez; enough laying the blame for every single Yankee loss on his shoulders.

Leverage Index experiments aside, let’s review a few key points that are seemingly glossed over in the articles about last night’s game.

So there are six factors that contributed to the loss tonight absent the weather and terrible pitching by the Yanks’ bullpen. But of course, the media just dump on Alex Rodriguez. They dump and dump and dump.

Why do so-called Yankee fans want to see A-Rod fail? Why do his plays get magnified? This guy is the leading slugger in baseball over the last 10 years, and Yankee fans would rather see him play elsewhere. You are the people ruining baseball in New York.