Long-time manager Joe Maddon opted out of his contract with the Rays yesterday, and a few hours later new Dodgers president of baseball operations Andrew Friedman released a statement saying Don Mattingly will remain the team’s manager in 2015. I think they should quit screwing around and just hire Maddon, otherwise it’s going to be hanging over the team all season. We all know how this movie is going to end.

Anyway, with Mattingly supposedly staying put, he remains a non-option for the Yankees and their hitting coach job. We don’t even know if he would have interest in the gig, but it’s the Yankees and Mattingly. They’ll be connected forever. Here are some other miscellaneous coaching staff notes, courtesy of George King, Nick Cafardo, Buster Olney, Erik Boland, Mark Feinsand, and Sweeny Murti.

Via Andy McCullough: The Yankees hired former Yankee Eric Hinske as a pro scout after the season, and he helped the team woo Brian McCann to New York. “He was here, he was involved” said Brian Cashman of Hinske. “He helped me with Brian McCann … because he played with Brian. So I appreciate Eric Hinske giving Brian McCann a lot of good advice about his experience here with the Yankees. He was a great resource for about 30 days.”

Hinske, 36, was with the team for “about the month” before leaving to join the Cubs as their first base coach. You probably remember him as a member of the 2009 World Series team after being acquired from the Pirates at midseason. Hinske actually played for the Diamondbacks this past season, but he was terrible (49 wRC+) and decided to retire after being released in July. Long before he helped the Yankees land McCann, Hinske advised Evan Longoria to sign long-term with the Rays. Sounds like he might have a future in a front office.

Via Dave O’Brien (with a h/t to Chad Jennings), Eric Hinske and Melky Cabrera both received their World Series rings yesterday, courtesy of Jerry Hairston Jr. Hairston, who was able to fly in for Tuesday’s ceremony because the Padres had an off day, picked up his ring as well as Hinske’s and Melky’s. As luck would have it, the Braves are in San Diego this week, so the three former teammates met up before last night’s game for the exchange. “Jerry shook our hands and hugged us,” said Hinske, “and said they told him to tell us, ‘This is from the team and we wish you could have been there.’”

It’s a shame Hinske and particularly the Melkman couldn’t make it back to New York for the ceremony, but I’m glad they were able to get their rings from a fellow 2009 Yankee instead of through the mail. That’s pretty cool. Make sure you click through the O’Brien link for the photo.

The Braves signed a former Yankee outfielder late last night, but it wasn’t Johnny Damon, the one we half-expect them to land. Instead, Atlanta signed Eric Hinske to a one-year deal. The utility player will serve as a bench player and pinch-hitter for the Braves.

Hinske came to the Yankees in mid-2009 in a deal that sent Casey Erickson and Eric Fryer to the Pirates. While with the Yanks, he hit .226/.316/.512 with seven home runs in 98 plate appearances. In the postseason, he made just one appearance and walked during the World Series. He also inspired one of the all-time best Beyond the Box Score posts.

Generally, we would consider this a minor Hot Stove move, but it has some interesting ramifications for the 2010 Yankees. Earlier this off-season, we had heard that Hinske was interested in playing with Japan, and for a brief second, it sounded as though the Yankees were interested in bringing him back as a bench player. While atrocious in the field, Hinske provided the team with some much-needed pop off the bench. Clearly, though, the Yankees were willing to let him walk.

On a grander scheme, then, Hinske’s departure highlights a current problem with the Yankees. Their bench as it stands right now is really bad. Those not starting include Francisco Cervelli, Jamie Hoffmann and Ramiro Peña. Jerry Hairston is a free agent, and outside of Juan Miranda — deadly against righties, deathly against lefties — the Yanks have no obvious in-house options for their remaining bench spots.

Over the last few years, we’ve seen Brian Cashman mold and reshape his bench over the course of the baseball season, and this year is shaping up to be no exception. Reupping with Hairston is no sure thing as the Padres seem to have their sights set on him, and the list of remaining free agents feature some intriguing bats who will probably cost too much money.

To start the year, the Yanks will probably issue a bunch of Spring Training invites and hope that they can catch lightning in a bottle for a few months. With All Stars at nearly every position, that is right now the best we can hope for unless the Yankees are willing to overpay some role players, and that the team will not do.

While the big offseason additions received the majority of the media and fan attention during the season (rightfully so), the little moves the team made to tweak the roster midseason also played a key role in bringing them to the promised land.

For most of the first half, the best bat the Yankees had on the bench belonged to Brett Gardner, which was sad. That all changed in late June, when the team acquired World Series veteran Eric Hinske (and $400,000 to pay his salary) from the Pirates for two throw away minor leaguers (a.k.a. Casey Erickson and Eric Fryer). Hinske immediately became the team’s primary pinch hitter, and even chipped in a few starts here and there to keep the regulars rested.

Hinske famously clubbed five homers in his first seven games with the Yanks, and hit .226-.316-.512 overall. He also played three different positions (not including DH), and reached base in his only postseason plate appearance, eventually coming around to score.

The second midseason pickup came right on the July 31st trade deadline, when the Yanks used their surplus of minor league catching depth (in this case: Chase Weems) to import the versatile Jerry Hairston Jr. from Cincinnati. Hairston replaced the overmatched Cody Ransom as the all-purpose bench player, and he went on to play every position but pitcher, catcher, and first base for the Bombers. Hairston’s overall batting line of .237-.352-.382 wasn’t spectacular, but bench players that can get on base more than 35% of the time don’t grow on trees.

On the roster for all three playoff series, Hairston ignited a game winning rally with a lead off single in the 13th inning of Game Two of the ALCS. He later made a spot start in rightfield for the slumping Nick Swisher, going 1-for-3 off Pedro Martinez in Game Two of the World Series and igniting another rally with a lead off single. Although Hairston and Hinske saw limited action in the playoffs, both certainly contributed in big ways once their names were called.

The final midseason pickup came a week after the Hairston trade, when the Yanks shipped $100K to San Diego in exchange for Chad Gaudin. The righthander initially worked out of the bullpen, but soon displaced Sergio Mitre as the team’s fifth starter. The Yankees won all six of Gaudin’s starts, during which he posted a 3.19 ERA. Even though he was on call to make a start every round, Gaudin appeared in only one game in the postseason, mopping up a blow out win in Game Four of the ALCS.

No team is ever complete in April, and the Yankees did a tremendous job of upgrading their roster during the season while using minimal resources. Weaknesses were addressed by acquiring veteran players familiar with the roles they were being asked to fill, not players who weren’t accustomed to coming off the bench or pitching on an irregular schedule. The added depth rewarded the team down the stretch and in the postseason. 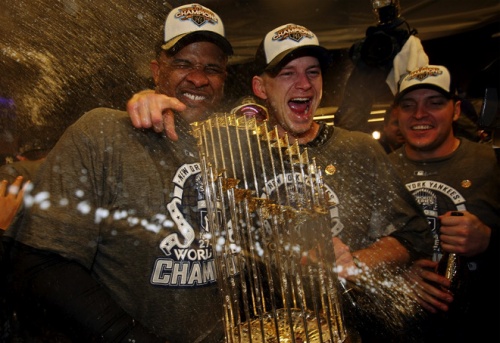 The Yankees have until 10 a.m. tomorrow to announce their World Series roster, but early indications are that the team plans to change things up from the ALCS. Jack Curry reported earlier today via Twitter that the team has added Eric Hinske to the World Series roster in lieu of Freddy Guzman. Clearly, with action heading to the NL parks, Hinske had to be activated. The Yankees don’t need Freddy Guzman around, and it’s debatable if they even did in the first place. With pitchers hitting this weekend, the Yankees will use Hinske’s bat off the bench. He can pinch hit as needed and could even spell Nick Swisher in right field. This move was a no-brainer.

Meanwhile, according to a report in The Post this morning, Yankee brass are considering adding Brian Bruney to the World Series roster. I’m a bit bearish on Bruney right now. He hasn’t pitched in a game since Oct. 2, and throwing simulated appearances in Tampa pales in comparison to pitching in games. If the Yanks want to add him, however, they easily could do so by dropping a third catcher. After A.J. Burnett’s showing in Anaheim last week, the Yanks probably don’t need to have Jose Molina caddy for their number two starter. Additionally, Burnett may have to start in Philadelphia, and the Yanks cannot afford to have a pitcher and Jose Molina in the same lineup. Therefore, the Yanks could drop either Molina or Francisco Cervelli and add Brian Bruney. We’ll know for sure by the morning.