Still unemployed, Ivan Rodriguez said he’d be willing to play somewhere other than catcher if it helps the team win him get a job. This one comes from MLB.com’s Joe Frisaro (h/t BTF). Other than catcher and DH, Pudge has played 55 innings at first and two innings at second in his career (both back in 2006), but he specifically mentions first base and third base as possibilities. He’s currently hitting .545-.583-1.182 for Puerto Rico in eleven WBC at-bats. If Pudge is willing to play third for a while and then settle in as the backup catcher … no, I didn’t just … no way, right? 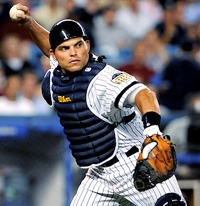 Looking back at this thread, which is hilarious in hindsight, some out there wanted the Yankees to offer arbitration to Ivan Rodriguez. Over a month and a half has passed since that deadline passed and, as with Bobby Abreu, we’ve heard few rumors of teams interested in Pudge. There’s just not a market for a 37-year-old catcher seeking a large contract.

The only real team I’ve seen him connected with is the Marlins. But landing there would mean a substantial pay cut from his 2008 salary:

Indications, however, are the only way Rodriguez would be a Marlin is if he is willing to play for the league minimum. For an established star like Pudge, that may not be the price he is willing to accept.

The O’s are out for Pudge, as they signed Gregg Zaun to handle duties until Matt Wieters is deemed fit for full-time duty. The Red Sox could use a catcher, but could Pudge catch a knuckleballer? We know Josh Bard can’t.

While Pudge’s destination isn’t known at this time, we do know one thing. If his agent had been able to properly forecast the MLB off-season landscape, he would have accepted an arbitration offer from the Yankees. And that would have been a bad thing — it might have cost them Mark Teixeira.

We’ve talked about this a bit before, but with it becoming official that Ivan Rodriguez will be a Type B free agent, we should revisit it. Should the Yankees offer him arbitration in order to gain a supplemental round pick when he signs with a different team? There are a couple of factors to consider in this decision, and I’m sure it’s something the Yankees mulled at their organizational meetings.

If the Yankees do offer Pudge arbitration, there is always the risk he accepts. As we learned when I read through the relevant sections of the CBA, this means he is counted as a player for next season and is added to the 40-man roster. The Yankees will then either have to hammer out a deal with him, or go to an arbitration hearing. Neither of these seems ideal, as the Yankees surely don’t want him back. They can cut him prior to Spring Training and only be liable for a portion of his salary, but they’ll then 1) not get the supplemental pick when he signs elsewhere and 2) be short a 40-man roster spot, which can be used to protect J.B. Cox, Alan Horne, Chris Garcia, etc. from the Rule 5 draft.

However, it doesn’t seem that large a risk. Pudge knows that the Yankees plan to start Jorge Posada behind the dish. Surely he does not want to be relegated to backup status, which he would be if Jorge proves healthy in Spring Training. Plus, he could probably get a two-year deal elsewhere, which would be far more attractive to him at this stage in his career. Chances are that he’d decline an arbitration offer, though it’s certainly no sure thing.

Because he is a Type B free agent, there is no disincentive for a team to sign him. Had he been a Type A, as was the projection at Tiger Thoughts, Pudge would have been more likely to accept arbitration. Teams would have probably stayed clear, not wanting to sacrifice a first rounder for a 37-year-old catcher who was putrid in the second half. Without the draft pick at stake, Pudge becomes more attractive for a team in need of a catcher (helloooo Mets).

In this instance, I think the risk of offering Pudge arbitration is worth the potential reward of a supplemental pick. It helps in the mission to rebuild the farm system, and gives us some form of compensation for Pudge, who was an utter disappointment in pinstripes.

We’ve got a ton of afternoon content in the pipeline, but I wanted to take this opportunity to discuss Ivan Rodriguez’s free agent status. I was thought that he’d get the Type B label, and that the Yanks wouldn’t go through the pain of offering him arbitration, only to have him accept and saddle them with a hefty contract for a declining player. Eddie at Detroit Tiger Thoughts whipped up his reverse-engineered Elias Rankings, and it appears Pudge could be a Type A. This complicates matters.

You can head over there to find out the entire reasoning, though as Mike said after reading it, “my head hurts.” Eddie puts the probability of Pudge garnering Type A status at 80 to 90 percent. If that’s the case, is he worth the risk?

Eddie Bajek at Tigers Thoughts has, with as he calls “reasonable certainty,” reverse-engineered the formula used to determine Type-A & B free agents, and has posted the current rankings of AL catchers. Pudge comes in as the highest ranked Type-B free agent, 0.891 points behind Ramon Hernandez. Under the new CBA, Type-A Type-B FA’s do not need to be offered arbitration to bring compensation. I’d rather see Pudge pick up his game and take the risk of offering arbitration. (h/t MLBTR)

Update (4:51pm): Nevermind, both Type-A & Type-B free agents need to be offered arbitration to yield compensation picks. My bad, yo.

How do you solve a problem when your All Star catcher goes down? By going out and acquiring another one, of course.

According to Buster Olney, the Yanks have acquired Ivan Rodriguez in a trade for Kyle Farnsworth. Farnsworth, the beleaguered reliever, had been throwing well of late, but the Yanks had long soured on Krazy Kyle and his unreliability. In Pudge, the team gets back a catcher hitting .295/.338/.417 in 328 plate appearances this year (.377/.423/.526 over 124 plate appearances since June 8th). He’s thrown out 18 of 50 would-be basestealers, a mark not quite as good as Jose Molina’s but not too shabby.

Off the bat, I’d call this trade a clear win for Brian Cashman and the Yanks. They’re trading one rental — a relief pitcher — for another rental — a catcher, and they’re upgrading from Farnsworth’s status as a Type B free agent to Pudge’s Type A. Plus, starting catchers are always more valuable than relief pitchers, and a catcher who can hit better than Jose Molina is a real upgrade for this team. Pudge will become the starting catcher for the rest of the season with Molina backing him up. This should spell the end of Chad Moeller’s run on the Yanks as well.