He’s been in the game since 1991. He’s pitched to Bo Jackson and Dave Winfield, Ken Griffey Jr. and Barry Bonds, Alex Rodriguez and Albert Pujols, and everyone in between. His first start came on Game 1,674 of Cal Ripken’s streak, less than two-thirds of the way through the Iron Man’s record.

Mussina finishes his career with a record 100 games over .500 (117 games to be exact), something only 20 other men have accomplished. Of those twenty, 16 are in the Hall of Fame. The other four (Clemens, Maddux, Glavine, Pedro) will be some day. Moose should one day make it 21 for 21. 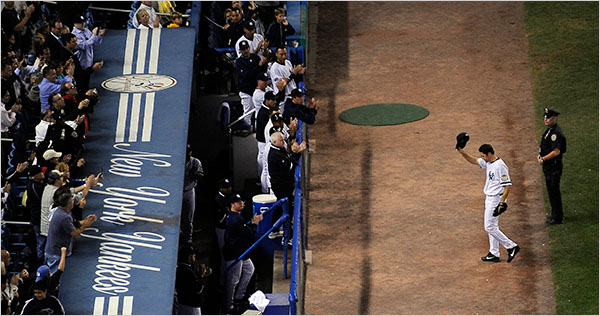 Via Ken Rosenthal, Mike Mussina has decided to call it quits and retire. The soon-to-be 40 year old leaves the game after his first 20 win season, having grossed over $144M in his 18 year career. Only 32 men have won more games in the big leagues than Moose, a rather remarkable number. The decision will be officially announced later in the week.

Congrats on the wonderful career Mike, few have done it better.

Update by Ben: From a personnel perspective, this leaves Yanks now with just Chien-Ming Wang and Joba Chamberlain as their starters under contract. The Yanks will probably now try to wrap up a deal with Andy Pettitte in short order and may increase the team’s push to sign CC Sabathia and either A.J. Burnett or Derek Lowe. Of the two Yankee starters from 2008, I was hoping Moose would be back instead of Andy, but you have to respect Mussina’s decision. He’s definitely going out on top.

Since the end of the season, Yankees fans have been waiting to hear the intentions of Mike Mussina. The 20-game winner doesn’t have a contract for the 2009 season, and there has been heavy speculation that he will go out on top. Still, we haven’t heard much from the man himself. It sounds like he’s still mulling the decision; if he was set on retiring, I imagine he would have announced it already.

That isn’t to say that he’s coming back. The way he told it to Mark Feinsand, he still hasn’t decided one way or another. We could hear from him soon, though. He claims he will make his decision “early next week.”

“I’m still kind of up in the air,” Mussina said Wednesday from his home in Montoursville, Penn. “I’m enjoying my time off, but then again, I always enjoy my time off.”

If he does come back, the first question will be on what terms. Will Moose seek a guaranteed three years, which he feels he’ll need to reach 300 wins? Will he accept a one- or two-year deal with options, perhaps of the vesting or mutual type? Or, most importantly, will he consider pitching anywhere but New York?

For all we know, though, we could be bidding adieu to a borderline Hall of Famer early next week. In either case, it has been a pleasure to have Moose on the mound for the past eight years. You know, except those few months in 2007.

Joe Torre hosted his annual Safe at Home Foundation dinner last night. While the news out of the annual gathering of Yankee luminaries included much of what we already know, Joe Girardi dropped something of a Mike Mussina bombshell.

As far as the Yankee skipper knows, Mussina will be calling it quits some time soon. While this is information Moose passed onto Girardi at the end of the season, Joe had no reason to expect Moose to change his mind.

For the Yankees, this decision has immediate impact. Moose threw 200.1 innings last year to the tune of a 3.37 ERA. He won 20 games for the first time in his career and was 12th in the AL in VORP for pitchers, trailing James Shields by just a few tenths of a point. In other words, he was the Yankee ace, and while he probably wasn’t going to duplicate these numbers next year, his potential departure leaves a gaping hole in the front end of the Yankee rotation, Andy Pettitte or no Andy Pettitte.

Enter Derek Jeter. It seems that Mr. Jeter is fulfilling his role as captain. As NJ.com’s Ed Price reported a few hours ago, Derek and CC Sabathia had a chat about New York. Derek didn’t go into detail, but it sounds like the two players had a nice talk about coming to New York. Clearly, the recruiting effort is on.

If the Yanks land Sabathia — and that’s a big “if” right now with so many other teams involved — the deal will be fraught with risks. The Yankees will be committing a lot of money and a lot of years to a pitcher who has racked up 1659.1 innings and is just a few months past his 28th birthday. In fact, only 45 other players in the history of the game have thrown more innings by that age. As with any long-term deal, it’s a risk.

I believe that it’s a risk the Yankees have to take. Sabathia would immediately stabilize the Yankee rotation and give them a front-end trio with the potential to be as good as any other team in baseball. How many times would you imagine the Yanks losing three games in a row with Sabathia, Chien-Ming Wang and Joba Chamberlain throwing in back-to-back-to-back games?

Of course, the Yankees have a lot of competition for Sabathia. He likes the NL; he’s very good at pitching in the NL and seems to enjoy hitting too. He could end up back near his home in Southern California as well. But the Yankees are interested, and they’re going to put the full-court press on. With Mussina out of the pitcher, Sabathia is the ace the Yanks need. Here’s to hoping they can land him.

Mike Mussina won the entirely symbolic Gold Glove Award for whichever players the BBWAA managers and coaches think might be among the best fielders. With his soft hands and cat-like reflexes, Moose has now grabbed seven Gold Gloves. This will probably be the only off-season award a member of the Yanks land although you could make a case for A-Rod for MVP, as shocking as that may sound to some of the A-Rod haters. (Gold Glove Winners)

EXTRA! EXTRA! Read all about it! The Yankees have room for Mike Mussina in their 2009 rotation. Stop the presses! Derek Jeter isn’t a very good defensive player. I bet you didn’t see any of this coming.

Update by Joe: Holy crap! The Yankees are going to make CC Sabathia their top target! Why aren’t we making a bigger deal of this?!?!?!?!?!*

* Multiple interrobangs brought to you by tommiesmithjohncarlos.

While Buster Olney thinks Mike Mussina will be in pinstripes in 2009, Ken Davidoff isn’t so sure. The Newsday scribe believes that the Moose is done for his career.

At this point, it would be a shocker if Mike Mussina did not retire. For years, Mussina has been determined to end his career on his terms, rather than being told he’s not wanted any longer. To walk away after his first career 20-win season, when he could actually get offers from all over the place…the only way it could’ve ended better for Mussina would’ve been a Yankees World Series victory to go along with his personal success.

You can expect a Yankee Stadium farewell news conference shortly after the conclusion of the World Series. I’ll leave myself one percent room for error. But no one who knows Mussina well thinks he’ll pitch again.

If this is true — and no one really has any way of knowing until Mike Mussina gets on stage and announces it himself — it will leave a glaring 20-win hole in the Yankee rotation. Mussina this year showed that he could adapt to age. He converted himself from a fastball pitcher into a Jamie Moyer type and enjoyed one of his best seasons ever.

Now, if Moose were to hang it up, the Yanks would have just Chien-Ming Wang, Joba Chamberlain and Andy Pettitte as definite members of the rotation in 2009. Without Moose to anchor the back end, the team will have to fill from a limited pool of free agents or internally from some combination of Phil Hughes, Al Aceves, Ian Kennedy or any other body that happens to be around.

Furthermore, I have more faith in Mussina going forward than I do in Pettitte, but the point may be moot. Over the last few years, Mussina has watched as well-respected hurlers — Roger Clemens, David Wells, Randy Johnson, Curt Schilling — have gone out amidst relatively poor seasons and injuries. He’d rather leave on top, and if that’s his choice, I’ll applaud him for it. For the sake of the Yanks, though, I hope he’s not quite ready to hang it up yet.