I was surprised to read though the game comments from last night and find only one remark on Eric Wedge’s decision to intentionally walk Hideki Matsui in the sixth last night. I was further surprised to see no mention of it in a handful of Cleveland papers. So I’ll keep this brief, since most people either didn’t think it was important, or didn’t think it was a bad move.

With runners on second and third with one out and two lefties coming up, conventional strategy would dictate that you walk the first one and pitch to the second, with the hopes of him hitting into a double play. This is one area where I think conventional wisdom needs to be tossed out the window. Hideki Matsui hasn’t looked comfortable at the plate since early September. Yes, he was 2 for 2 at that point, and his second hit looked pretty. But walking him to get to Cano, in my opinion, was a terrible call, situation or not. Any of my friends watching the game with me can attest to my first-guessing of Wedge on that one.

I do like Eric Wedge, but he demonstrated a lack of critical thinking by walking Matsui; it was based entirely on a static situation: second and third, one out, down by two. You don’t want to play the infield in, because a flare would then be two runs. You don’t want to play back, because then a groundball or a long fly makes it a three-run game. But at some point, you have to consider the players involved. Cano has murdered lefties this year — .328/.374/.490 — and those numbers were surely inflated by bullpen arms like Fultz.

Anyone else feel strongly about this one way or another? I’m guessing not, but I really think the decision itself was an understated moment in the game.

Oh, and just for another talking point, here’s an excerpt from the AP game story:

Alex Rodriguez stopped his postseason hitless streak at 18 at-bats with a second-inning single and also beat out an infield single. But he remained in a 6-for-54 (.111) playoff funk with no RBIs dating to his Game 4 home run against Boston three years ago.

He could have gone 4 for 4 and he still would have had poor numbers in the long haul. Why the media continues to harp on A-Rod, even when he has a quality game, is beyond me. He went 2 for 4 and started the inning that blew the game open. Hopefully he can go 10 for 4 tonight and really break out of this slump.

Anyone else think that Robinson Cano is totally sleeping with Kim Jones? That post-game interview today pretty much sealed the deal for me.

Update by Joe: Don’t worry. Once Robbie signs a seven-figure deal, he won’t have to sleep with the Kim Jones’s of the world.

If you want to see for yourself, here’s the link. Stupid YES won’t let you embed their YouTube videos.

After going 0 for 5 with 2 K and 7 LOB against the best pitching team in the AL (by a helluva margin I might add), Robbie Cano was dropped from third to ninth in the lineup by Joe “Look, I already told you, I have people skills; what the hell is wrong with you people!!!” Torre. Way to instill a little confidence in the kid Joe; god forbid you give him more than…I dunno…one frickin’ game to prove himself.

If it was calling the shots, I’d have given Robbie at least 2 or 3 more games to show me whether or not he can cut it in the 3-hole. Day-night splits be damned, you don’t hit .340+ over a full season in the major leagues by accident. If Joe’s not going give Robbie a fair shake, then he’s got to do either one of two things: a) move Jeter to the 3-hole full-time, or b) go old school and bump everyone in the lineup up a notch (A-Rod bats 3rd, Posada 4th, Matsui 5th, and so on).

It’s July 2nd and the team’s 11 GB in the division (9 GB in the Wildcard), it’s time to stop fuckin’ around with the lineup and get the best players the most AB’s possible. 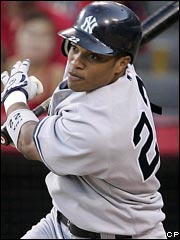