Two quick notes to pass along:

Triple-A Scranton/Wilkes-Barre RailRiders Game One was suspended again due to rain. The game was suspended with two outs in the bottom of the third yesterday, resumed today, then suspended again after the top of the fifth. Here’s the box score. They’re going to complete this one — or try to, anyway — as part of a doubleheader tomorrow.

Triple-A Scranton/Wilkes-Barre RailRiders Game Two was rained out. The game was canceled and will not be made up.

END_OF_DOCUMENT_TOKEN_TO_BE_REPLACED 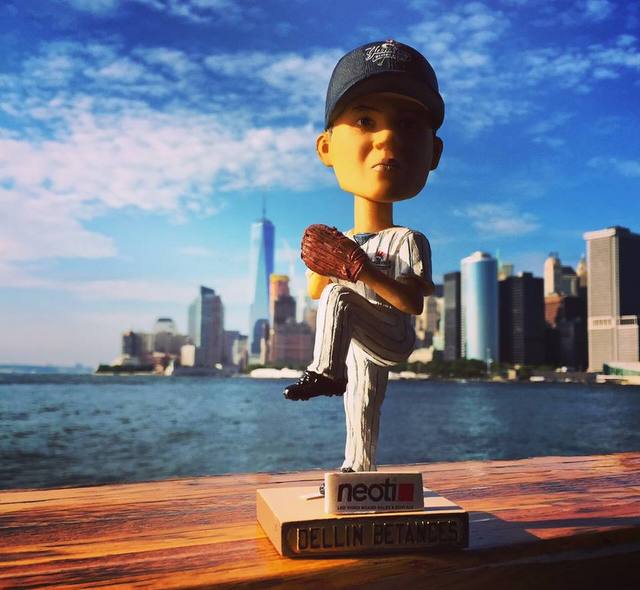 Just a heads up, the Staten Island Yankees are holding a Dellin Betances Bobblehead Night this Saturday (the bobblehead above!). The first 2,500 fans in attendance will receive once. It’s also FDNY Appreciation Night and there will be postgame fireworks. Click here for tickets and make sure you use the promo code “FDNY” so the proceeds go to John G. Chipura Foundation and Joseph Grzelak Fund. You get a hot dog, a drink, and a Staten Island Yankees hat all for $20. Can’t beat it. Here are some other quick notes:

Triple-A Scranton is off until tomorrow for the All-Star break. The International League beat the Pacific Coast League by the score of 4-3 in the All-Star Game tonight. Here’s the box score.

Double-A Trenton is off until tomorrow for the All-Star break. The All-Star Game was played time and the score was tied 4-4 after nine innings, so they went to a Home Run Derby shootout. Each player got one swing and they alternated sides until someone homered. Reading DH Brian Pointer won it in the 11th round for the Eastern Division team. Neat!

END_OF_DOCUMENT_TOKEN_TO_BE_REPLACED

The draft signing deadline is Friday, July 17th this summer, and as far as we know the Yankees are not close to a deal with UCLA RHP James Kaprielian (1st round). He’s a Scott Boras client though, and top Boras clients tend to not sign until right before the deadline. The Yankees did sign second rounder LHP Jeff Degano earlier this week. Here are some later round draft signings.

Make sure you check out our 2015 Draft Pool Tracker to keep taps on the team’s bonus pool situation. Unless one or some of those guys above signed an overslot deal — no reason to think that, but it’s always possible — the Yankees have $643,900 in draft pool savings to spend. My guess is some of that will go to Kaprielian. By my unofficial count, the Yankees have now signed 30 of their 41 draft picks.