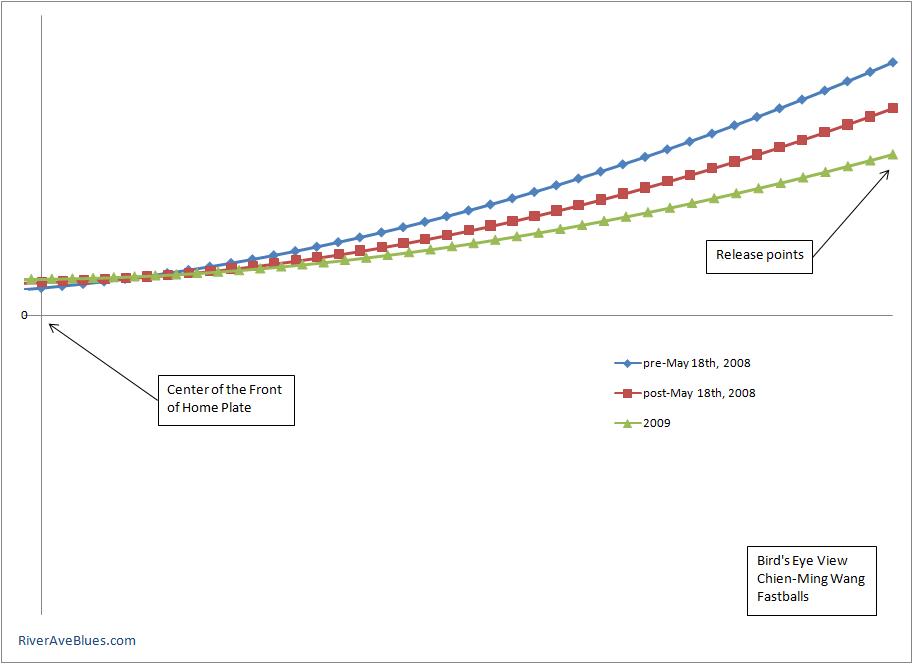 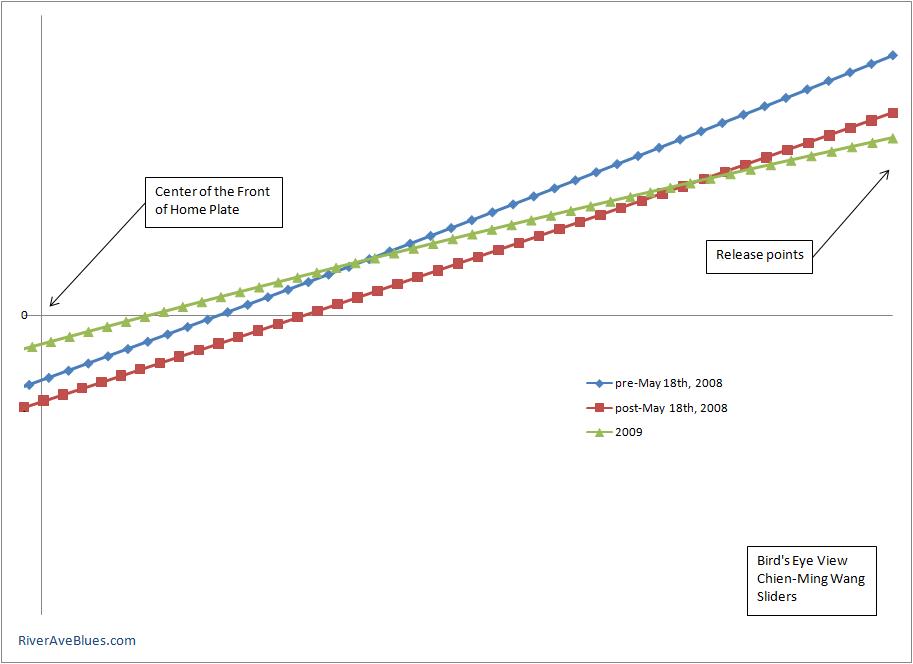 Looking at the fastballs first, you can see that the horizontal release point of the three versions are different, but the pitches typically end up at the same spot. That means that the post-May 18th fastball has less movement than the pre-May 18th version, and the 2009 version has even less movement than that. That’s not good, Wang’s a guy who needs his fastball to dart and dive and all that jazz. You can also see that his ’09 slider isn’t moving as much as the ’08 versions.

Now, the look as if you were standing at first base: 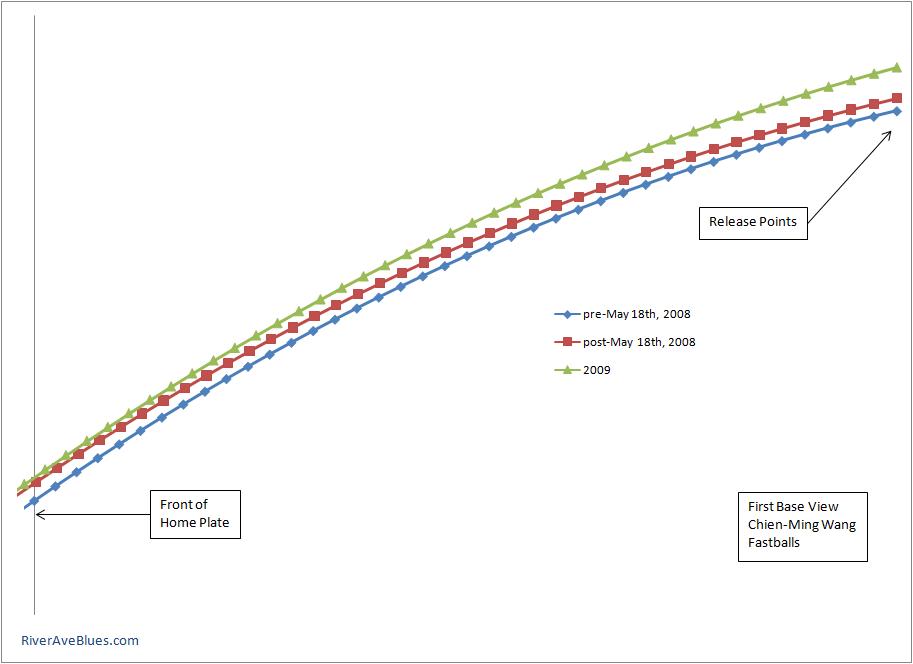 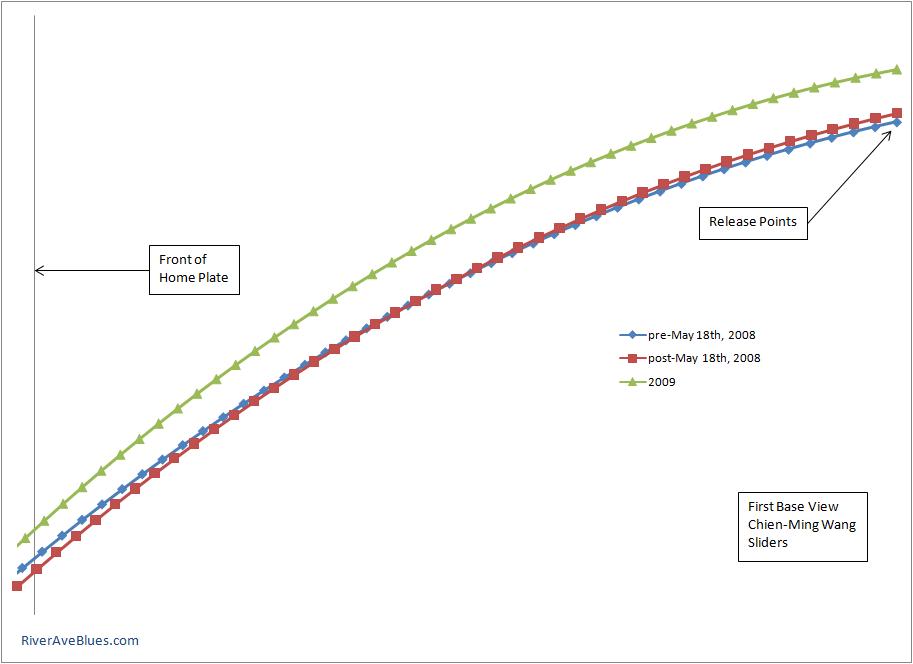 This view shows is that Wang is releasing both pitches from a higher spot this year than he did last. The fastball still has vertical drop, but it’s not moving horizontally as much, which you can see in the bird’s eye look. Let’s take a look from the catcher’s view: 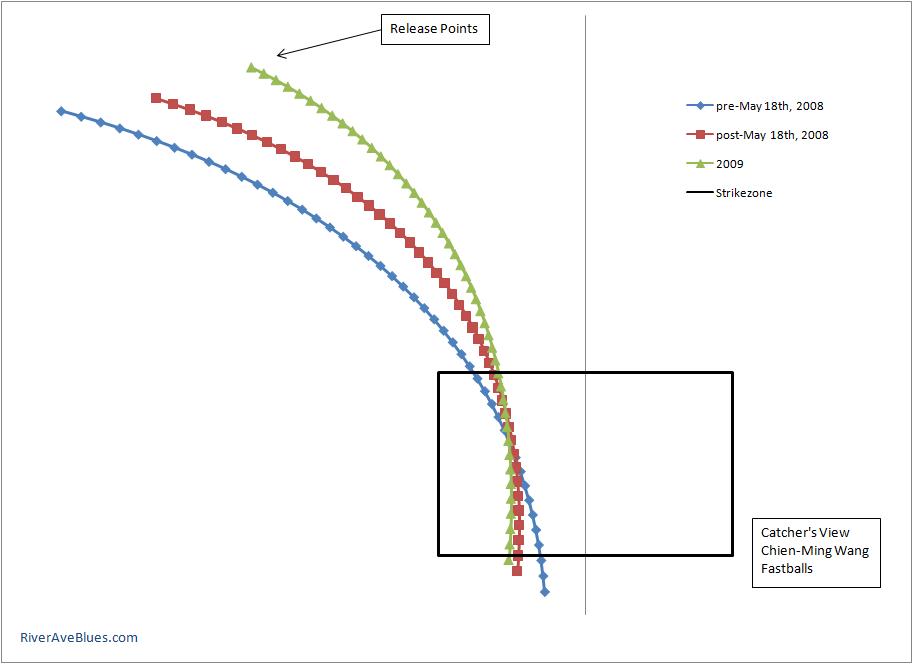 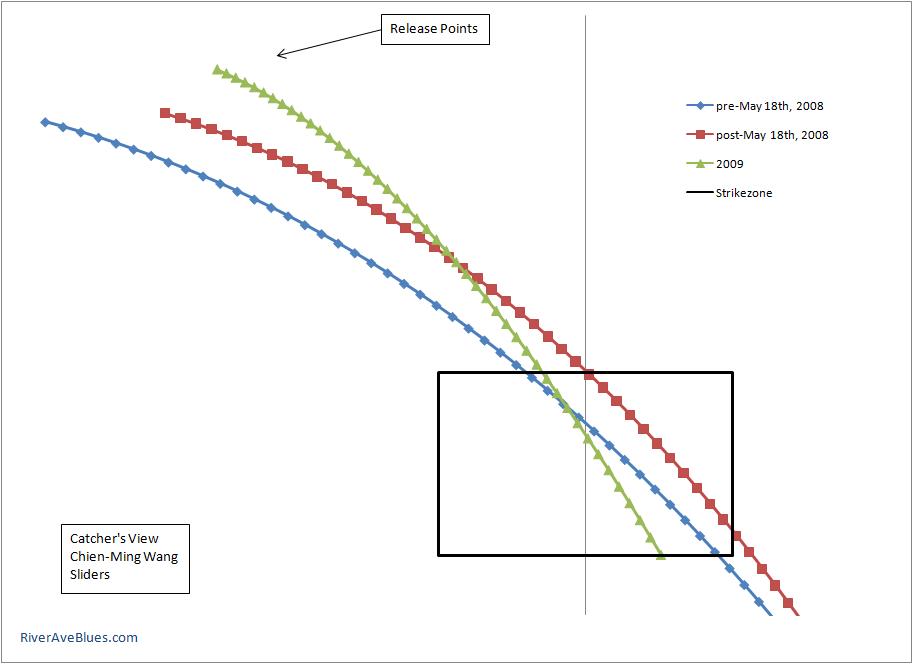 More than anything, this view just gives you a different look at the above. His pitches are still moving vertically in a way similar to last year, but they definitely don’t have the same kind of side-to-side movement. To further drive home that point: 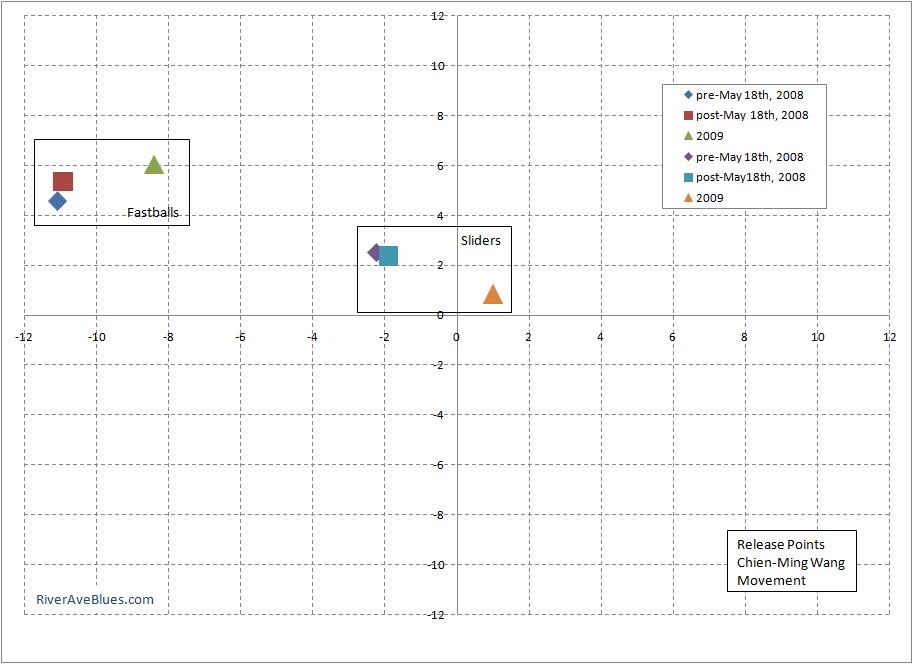 I haven’t posted one of these movement plots on RAB yet, so let me explain. It’s simple, don’t worry. The x-axis shows the horizontal movement of the pitch with 0 meaning it’s straight as an arrow. A negative value means the pitch moves in on righties, a positive value means it moves in on lefties. The y-axis is the vertical movement of the pitch compared to a ball thrown with zero spin. Fastballs have big numbers because they have more carry on them then this mythical zero rotation pitch, but breaking balls have small numbers because they move more. Curveballs are usually in the negatives, as are super elite sliders (think Brad Lidge). The units in this graph are inches.

So, from this you can see that his fastball still has the same kind of vertical movement as last year, but it’s just not riding as hard horizontally. The slider’s dropping a bit more but not moving as much horizontally as last year. All of this is consistent with everything presented above. These trajectory and movement plots are fun to look at, but all they really show are results, the results of his pitching motion, and apparently that’s the problem. From Pete Abe:

Wang seemed stunned. He said the issue was where he released the ball, which was off to the side instead of over the top. A sinkerball pitcher wants to stand tall on the mound and throw the ball on a downward plane. Otherwise the ball floats over the strike zone and you see what happens.

That sounds good and make sense, but the data doesn’t agree. Here’s a look at Wang’s release points: 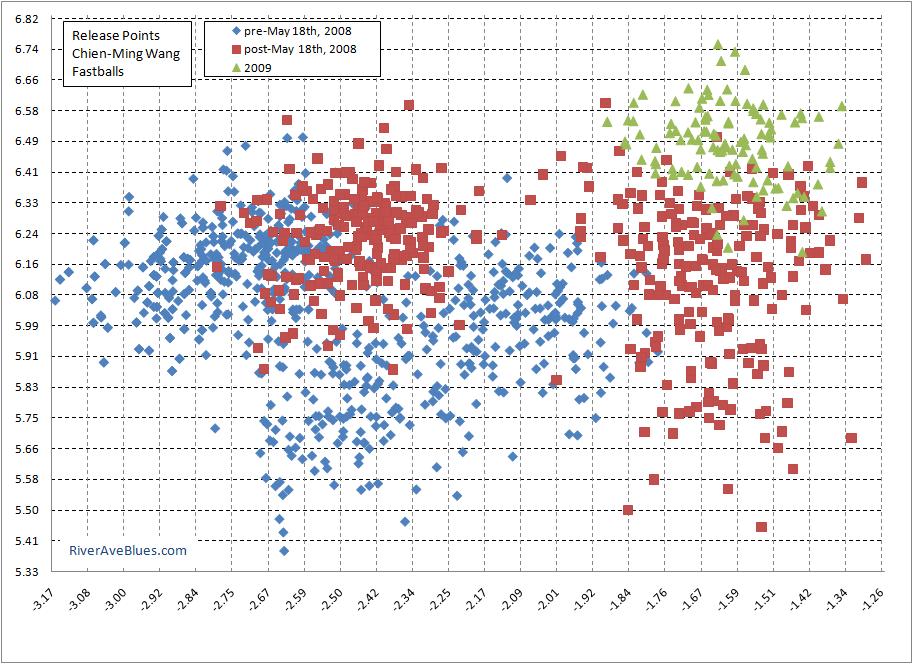 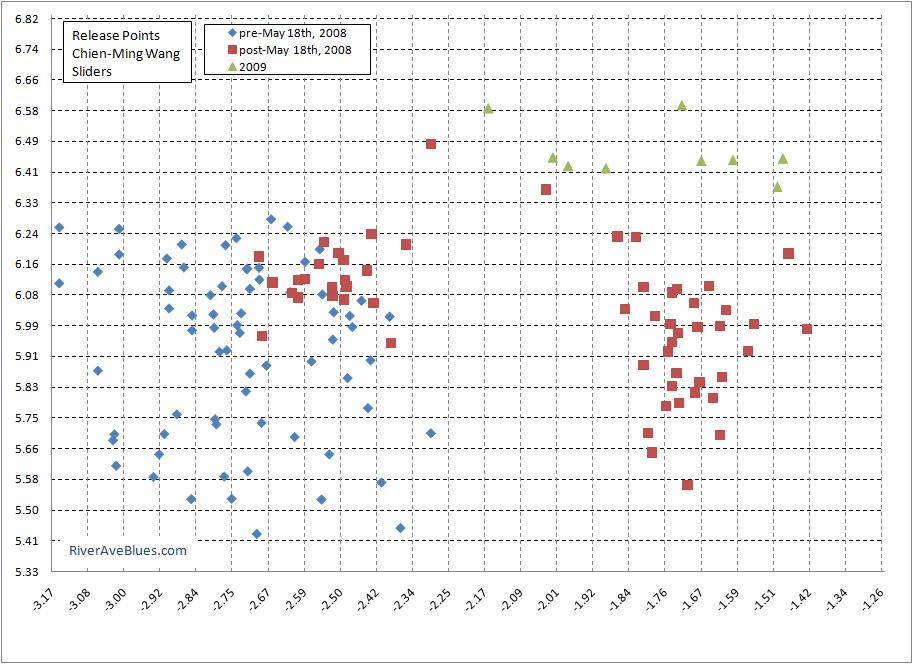 If you haven’t seen these before, make sure you read RAB more often the point 0,0 is the center of the front of home plate, so the x-axis shows you how far away from the middle of the plate you are, and the y-axis shows you how far you are above the ground. Now, there’s a couple things going on here. First of all, those post-May 18th points that are mixed in with the pre-May 18th points are scattered over several starts. It’s not like all those pitches came from one or two starts, they’re spread out over all six starts. Secondly, it’s very likely that the difference in the general horizontal location of the pitches is caused by Wang move more towards the first base side of the rubber, but we’re focusing on the vertical location since Wang said he wanted to come more over the top.

In general, Wang’s throwing the ball from a spot about six inches higher this year than he did last year, no matter if you consider the good ’08 Wang or the bad ’08 Wang. That contradicts what he said after the game, but that doesn’t mean he’s lying or the data’s wrong. It’s entirely possible that he wants to release the ball from an even higher spot than he currently is, but I have to ask why? I mean, if throwing it from a slightly lower slot worked last year, why change it? I’m no pitching coach or pitching mechanics expert, so I won’t even attempt to answer those questions. All I do know is that for some reason Wang is releasing the ball from a higher spot than last year and yet he still wants to come even more over the top.

Finally, lets take a look at his velocity, because it’s definitely been down this year. 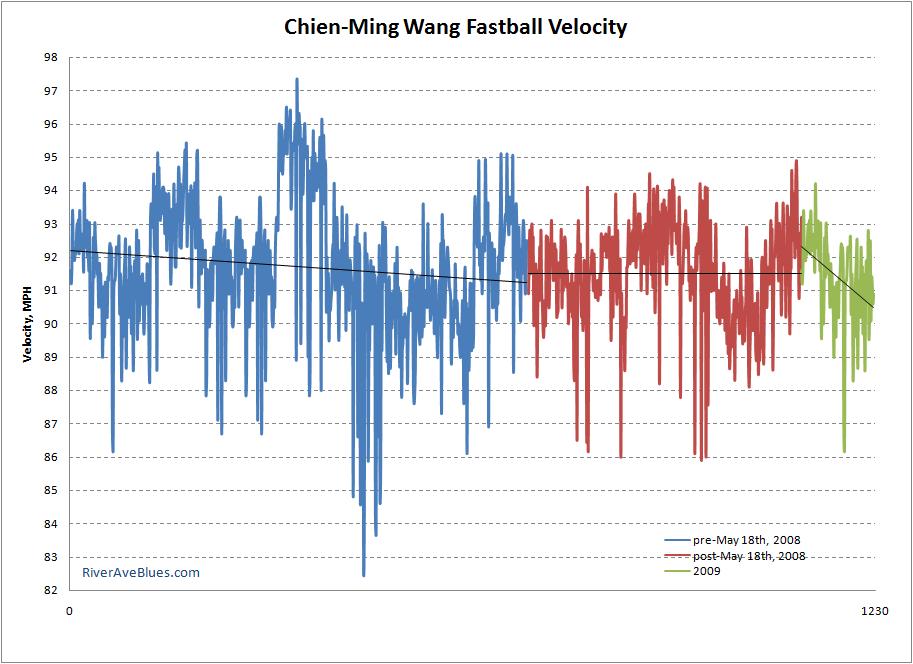 That graphs encompassed a ton of pitches, 1,227 to be exact. Last year he was sitting at 91-93 pretty consistently, except for that one start which was probably a dead arm thing considering it was preceded by a spike in velocity (maybe he was overthrowing in a big start and wore himself down). This year Wang is sitting only 89-91, a small but definitely notable drop. This could be from bad mechanics, a dead arm period, injury, or about a million other things. The team already shot down injury and said it was just a mechanical issue, and I believe them because Wang didn’t appear to be in any obvious pain, he was more disgusted with himself.

I don’t know what’s wrong with Chien-Ming Wang, but whatever it is, it’s causing him to lose movement on his pitches as well as velocity. Maybe it’s just rust from the long injury layoff. Disirregardless, I hope he gets himself straightened out sooner rather than later. The cool part about the ’09 Yanks is that even though CMW is struggling, they can still trot out four quality starters. When’s the last time we could say that?

Who's contributing to the Yanks offense?
Quick hits: Wells, toilets and YES