The series in Texas highlighted three Yankees pitchers who have been the subject of much debate: Phil Hughes, Joba Chamberlain, and Chien-Ming Wang. All three could be part of the starting rotation, but there are only two spots for them. This has led to arguments about what to do with each. Should Joba go to the pen? Should Hughes? What about sending Hughes to AAA to get his innings in? Can Wang be the long man? These questions, and really any question about what to do with these three pitchers, can be answered in the simplest of manners:

Let’s see how this plays out.

Given the current state of the team and the statuses (statii?) of the three pitchers, there is no reason to make a decision right now. The Yankees can move forward as currently scheduled and observe how things play out. Over the next few weeks there will surely be an opportunity for the Yankees to arrange their pitchers in a sane and useful way, both for the 2009 season and the long-term.

There is no better example to illustrate this point than what happened in April with Wang. Who would have thought he’d be that bad? Some people might have been wary of his ability to come back full strength after his Lisfranc injury, but to be that bad? No one really foresaw that, not to that extent.

Pitching surpluses have a way of working themselves out. If the Yankees are lucky enough to have all three pitchers going at peak performance a month from now, then they might have a tough decision to make. Until then they can continue on the current course. Something’s bound to happen, and if it doesn’t the Yankees should be thankful to have to make said weighty decision.

Let’s take a look at each pitcher to examine his advantages and shortcomings. I think this will make it clear that the Yankees have nothing to worry about right now.

He’s perhaps the strangest story of 2009. First he was the worst starter in baseball over his first three appearances. Then the Yanks were criticized for placing him on the DL. Finally, just before he was about to pitch another rehab start the Yanks recalled him to pitch out of the bullpen. Such a strange sequence of events for such a solid pitcher over the past two and a half years. This led many to wonder about the future of Chien-Ming. His first appearance after returning didn’t do much to quell those fears.

Last night, though, Wang impressed in his two innings of work. Not only did he keep the sinker low for the most part, but he struck out two and induced ground balls. That’s the Chien-Ming we know and love. Clearly, he’s going to be back in the rotation if he keeps this up. However, it’s the last five words of the preceding sentence are weightier than the first nine. It’s going to take more than one two-inning appearance for Wang to prove he’s ready for full-time action.

The signs last night were encouraging. If you look at Wang’s pitch f/x from this start in April, you can see it’s high and off to the side. Compare that to last night’s data, and you can see that his release point is lower and more over the top. That’s where Wang needs to be. Of course, there are other factors at play here, like pitch f/x consistency from park to park. I think, though, that it was easy to see that Wang used a lower release point last night.

Before moving Wang back into the rotation, the Yankees would do well to get him regular work out of the bullpen first. This is in order to 1) keep both Hughes and Joba in the rotation and 2) to let him work himself back at the major league level. He might not get long outings, or at least I would hope not. Long outings mean the starter failed. But maybe he can go two innings in relief of Pettitte on Friday, and then pitch again in relief of Phil on Sunday or Joba on Monday. The Yanks don’t want to overwork him in the pen, but he could certainly pick up two innings here and two innings there to help him work back into a groove. 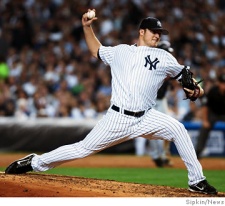 Phil Hughes’s starts for the Yankees, on the Crap to Lights Out scale: Lights Out, Crap, Crap, Decent, Decent, Lights Out. The potential is clearly there. Now Phil has to figure out how to put it together. Unfortunately, it’s doubtful he’ll be able to do that in the minors. He’ll be able to get in his innings and build himself up to pitch ~200 innings next year, but he won’t be able to take the lumps which all young pitchers must take before blossoming into top-line starters. In other words, the best course of action for the development of Phil Hughes is to keep him in the big league rotation.

The problem is that there are still concerns with him from start to start. As we saw on the Crap to Lights Out scale, Hughes can take three forms. It’s nice to think that he’s turned a corner after his last start, but we all thought that after the Detroit start and he made four non-Lights-Out starts before his next. The in-between results were less than stellar. So it’s no guarantee that Hughes pitches another Lights Out start in his next few outings. At this moment, though, with Wang still working back into shape, it’s best to keep Phil in the rotation and see what he can give you.

What happens, then, if Wang proves he’s ready to re-enter the rotation? If Hughes throws a couple more Crap starts between now and then, the solution is obvious, in that the Yanks return Hughes to AAA to get his innings up in anticipation of a near-future recall. If Hughes is pitching Decent or Lights Out, it might be a tougher decision. It’s a nice problem to have, of course, since it means you have six good starters for five spots. The Yanks can afford to hold off on that decision for at least a week, probable more, which is also a comfort.

Notice how I didn’t answer the question? That’s because despite the niceness of the problem, the solution isn’t easy. Do you send Hughes back to AAA to get innings, despite his ability to help the major league club? Do you send him to the bullpen and work out a plan to get him his innings? The answer to both is dependent on the specific circumstances at the point of the decision. It also has a lot to do with the final pitcher in this equation. 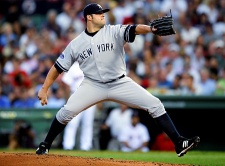 The lowest common denominator solution in this case is to move Joba to the pen. We’ve seen him in the pen before, so there’s a confirmation bias built into the situation. Furthering the confirmation bias is that we saw him dominate out of the pen. Since he’s not exactly dominating in the starting rotation right now, it’s easy to see why some people would favor this solution. However, it’s the easy solution for a reason: it requires the least amount of thought. Joba’s struggling in the rotation, we’ve seen Joba dominate in the pen, therefore Joba goes to the pen. The actual situation digs a bit deeper than that.

Of the three pitchers discussed in this article, the Yanks hold Joba in the highest esteem. He was a potential top-ten pick who fell in the 2006 draft because of triceps tendonitis and concerns about his weight. The Yanks got a steal, a pitcher with front-line potential in the supplemental first round. It was a high-risk, high-reward pick, and surely the Yankees want to see if they can realize that high reward. The highest of high rewards, of course, is an ace pitcher, and that’s Joba’s potential. It behooves the Yankees to give him every chance to prove he can be that top of the rotation starter.

But what if Joba is struggling while Wang and Hughes are pitching well? Again, that would be a difficult question for the Yankees to answer. Joba’s innings situation is a bit more dire than Hughes’s. The latter pitched almost 150 innings in 2006, so they can afford to push him a bit higher this season. Joba maxed out at 112 innings in 2007 and threw only 100 in 2008. Clearly the Yankees need to build up his innings in order to maximize his value (as a starter). That won’t happen in the bullpen.

While it’s true that Joba could improve the Yanks shaky bullpen, it is far from the only consideration in the matter. First, think of how many games the bullpen has actually blown for the team this year. Then think about having Joba in those situations. Is it really a guarantee that he saves all of those games from the jaws of defeat? Is it a guarantee that he doesn’t blow a different game? Expecting him to have a 0.00 ERA in the bullpen is ridiculous. That’s not to say he can’t be lights out. It is to say that he might represent only a marginal improvement in terms of how the bullpen actually affects the team’s record.

Here’s one argument many B-Jobbers (for the uninitiated, our euphemistic moniker for the Joba-to-the-bullpen crowd) fail to acknowledge. Last year Joba was dominant in the bullpen in April and May. The Yanks then stretched him out to start in June, and he was dominant as a starter. This year Joba has struggled at times in the rotation. So who’s to say he won’t have equivalent struggles in the bullpen? Is he going to miraculously pitch with more efficiency because he’s only going one inning at a time? I don’t think so. Considering his first-inning woes, he might be even worse in limited action out of the pen (please, note the emphasis on “might”). Are the Yankees really better off with Joba pitching 20-pitch innings out of the pen three times a week than they are with keeping him in the rotation? Clearly, I think not.

The next few weeks will be important for the fates of all three pitchers. Maybe they all pitch well and the Yankees have a tough decision to make. Maybe Hughes and Wang pitch well, leaving them with a decision on Joba, which could be even tougher. Maybe either Wang or Hughes struggles and the answer becomes clear. In any case, it’s far better to continue on the current path than make a decision in haste right now. The Yankees are in first place. The offense is rolling. The starters have been pitching better. The bullpen has avoided its April misfortunes.

As I said earlier in the week, there are times when a decision needs to be made, and there are times when patience should win the day. In the case of Chien-Ming Wang specifically, the Yankees can ill-afford to wait around while he doesn’t pitch. But when making a decision among three pitchers for two spots when the team is going well, it’s a time to let patience reign. There’s plenty of season left, and something is bound to happen which will make the decision easy for the Yankees. Best to stay the course now. Let Wang build himself back up in the pen while Hughes and Joba work out their issues in the rotation. As long as the offense keeps rolling it shouldn’t be a huge issue.