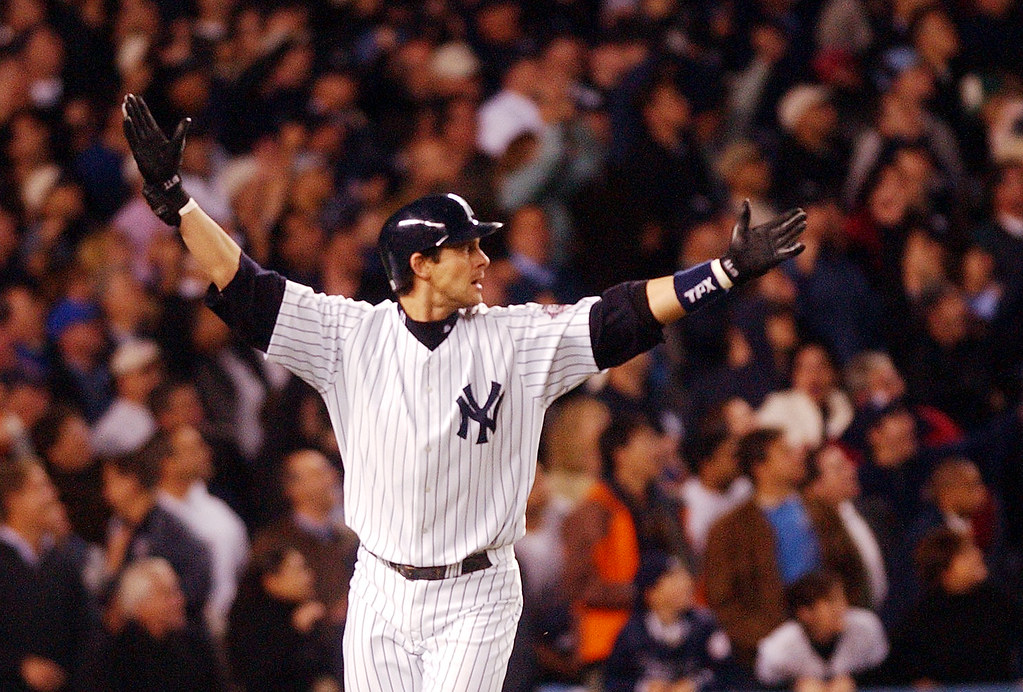 As we await Game 1 of the 2009 ALCS, tonight marks the anniversary of the Yanks’ last American League title. Six years ago, Aaron Boone, an unlikely hero, launched a Tim Wakefield offering into the left field stands to to win one of the best Game 7’s of all time. While I enjoyed the game from the den at my grandparents’ house in Florida, my dad and sister were at Yankee Stadium. My sister, currently in Nicaragua where she will have to watch los playoffs in Spanish, offered up to share her memories of the game. So a guest post by Victoria Kabak on Game 7 of the 2003 ALCS…

During the Octobers that I was 9, 10, 11, 12, 13, 14, 15, 16, and 17 years old, my family employed an elaborate rotation system to determine who went to which playoff games and with which other family member. Sometimes I wasn’t so lucky—the Yanks’ sweeping the 1999 World Series was a mixed blessing, as Ben and I were supposed to go to Game 5 (we each have a framed laser copy of the tickets, but it’s not quite the same).

But sometimes I did get lucky. It was with my dad, sitting on the main level in foul territory in left field, that I witnessed Roger Clemens pick up a piece of a broken bat and hurl it at Mike Piazza in 2000. Ben and I watched Jeter back flip into the stands in the 2001 ALDS against Oakland. All of these times I remember the palpable fervor of the crowd, especially as everyone exited the stadium at the end of the game, barely moving down the ramps and spontaneously erupting into cheers and chants.

Never did I experience a mania that came anywhere close to what I experienced six years ago today. I was 16 and it would appear that luck was on my side for that postseason family rotation. Again with my dad, I sat in the Tier Reserve down the third base line to watch the Yankees and the Red Sox determine who would play in the World Series and who would go home. The game had been going on for over four hours. The series had been going on for seven games. I would either go to school the next day tired and happy, or I would go tired and sad, with the prospect of five and a half boring months without baseball.

The game had already been an exciting one, with a less-than-stellar outing from Roger Clemens, a more-than-stellar relief appearance by Moose, and Pedro Martinez’s blowing the Sox’s three-run lead in the bottom of the 8th. Whatever happened after the 9th inning would be very exciting to one team’s fans. The feeling in the crowd was truly electric.

In the 11th it was really time for the Yanks to wrap it up. Probably the least desirable batter was at the plate—Aaron Boone. I’m sure my dad and I groused, wishing someone else – anyone else – was up.

Of course, as it happens, this is baseball we’re talking about here and the impossible is possible. Aaron Boone, in the peak moment of his career, sent the ball sailing into the seats behind left field. I had the most fleeting sense of worry as I could feel the upper deck literally moving up and down, palpitating below my feet. As the celebration continued, I called my mom, who was watching the game alone at home. I have no idea what, if anything, she said to me, but I know what she heard: a crowd of Yankee fans going wild.

Even though Boone’s homerun came after midnight, on October 17, it is an omen of the highest order that the Yanks are beginning their final push toward the Fall Classic on the sixth anniversary of the day Game 7 of the 2003 ALCS began—the sixth anniversary of a seemingly impossible occurrence. I only hope that the Terrace can shake the way Tier Reserve did.