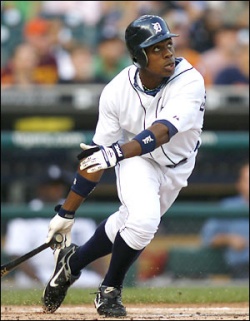 The outfield is the Yankees’ biggest area of concern this off-season, and to that end Mike examined the free agent class yesterday. There are some attractive names on there, but there’s nothing that makes me think, “That’s the guy I want roaming the outfield for the Yanks in the future. Matt Holliday is the closest in that regard, but that would require a big commitment. Even if the Yanks are thinking of Holliday, they should explore alternatives first.

In an item posted barely an hour ago, Joel Sherman reports that the Tigers have made center fielder Curtis Granderson available. He speculates that the Yankees will be interested, and I can’t blame them. Granderson is a high quality player that can help shore up the Yankees outfield. That is, if his 2009 season isn’t a window into his future production.

Granderson made his mark in 2007, his second full season in the majors, when he posted a triple slash .302/.361/.552, including 23 home runs and 23 triples. That’s the kind of production any team would love in center field, and if Granderson kept it up it’s unlikely that the Tigers would trade him. Unfortunately, his production has dropped in each of the past two years, dipping to .249/.327/.453 in 2009. But does that necessarily detract from Granderson’s trade value?

It seems that for the Tigers, trading Granderson would be more about future payroll commitments than 2010. He’s owed just $5.5 million next year, but his salary climbs after that, as he’ll earn $8.25 million in 2011 and $10 million in 2012, with a $13 million club option ($2 million buyout) for 2013. That seems like a pretty team friendly deal, but with Granderson’s production dropping over the last two years the Tigers might want to avoid that gamble.

Granderson’s BABIP stands out as a reason for his dip in production. After posting marks of .362 in 2007 and .317 in 2008, he fell all the way to .276 in 2009. I’m not here to chalk this up to luck and say that he’s poised to rebound. Instead, let’s take look at some other numbers that might explain the dip. Looking at his batted ball data, you can’t help but notice one big change from 2008 to 2009. Granderson’s ground ball rate dropped dramatically. He was at 34 percent in 2007 and then saw that rise to 40 percent in 2008. In 2009 it fell all the way to 29.5 percent. That meant an increase in fly ball percentage, to almost 50 percent. Since ground balls go for hits more frequently than fly balls, Granderson’s lower BABIP, and therefore lower batting average, is easily explainable.

Did Granderson change his swing between 2008 and 2009? That might be the case. Two factors suggest this. First, the shift from ground balls to fly balls. Second, an increase in home runs and infield fly balls. Granderson hit 30 home runs in 2009, eight more than in 2008 and seven more than during his previous high in 2007. His infield fly percentage rose from 5 percent in 2008 to 13 percent in 2009. So he hit a lot more fly balls, particularly fly balls that are very easy to catch.

If it’s a change in swings, it clearly didn’t work. Granderson might have hit more home runs, but he maintained the same level of home runs per fly balls in 2009 as he had in 2008. In other words, if he goes back to what worked in 2008, he could again be a viable option. With the help of Kevin Long, I’m sure Granderson could make the transition and return to being a productive player.

(And, just for Mike, I know he had a .484 OPS against lefties last year, but again, that seems like an approach thing. He was much better in previous years.)

The question is of just how productive he’ll be in 2010 and beyond. He’ll be 29 for the 2010 season, so a decline isn’t expected. Assuming Long can help him revert to his old form, then, what can we expect? I think it will be a lot closer to his 2008 production than 2007. Again, in 2007 he had a ridiculous BABIP, .362. It appears that this was the result of many fly balls dropping in for hits. He had a 44.8 percent fly ball rate that year, which usually signals a lower average. Granderson hit fewer fly balls in 2008, which helped his average even when his BABIP dropped to .317. That seems about normal: .317 BABIP for a .280 batting average.

Granderson is reputedly a good fielder in center, and UZR agrees. He’s had one negative year in the past four according to UZR, and is still positive overall. His negative value, unfortunately, came in 2008, the same year we’d like to think Granderson can repeat in 2010. Still, even with a -9.4 UZR, hew as still a 3.8 WAR player, which is a quality figure from center field. For comparison, Melky Cabrera, with a positive UZR in 2009, was a 1.6 WAR player.

Even with Granderson, the Yankees would probably still have outfield issues in 2010. Even though we’re not ones to throw out trade proposals, I assume the Tigers would require Austin Jackson in any possible deal. Granderson would be a fine replacement in center should the Yankees bring back Johnny Damon (or bring in Holliday), but he could also play alongside Melky for a year until the Yankees figure out what they’re going to do with left field.

All of this, of course, is contingent on Granderson recovering from a poor 2009. How much are the Yankees willing to gamble on that? How much on top of Jackson would they have to surrender? We don’t know the answers, but we’ll definitely keep up with this situation to see where the Yanks stand.