River Ave. Blues » Cashman: Granderson is the center fielder
Salvaging a bad investment
Walks a concern for Burnett, but so are ground balls 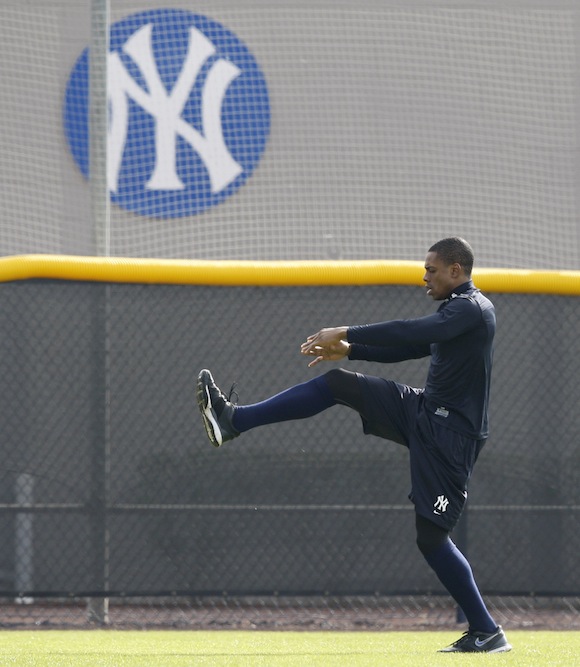 The latest motif out of Tampa has been the Yankees’ quiet Spring Training. Without a new manager or A-Rod’s PED revelations to rile up New York’s sports media world, most commentators and reporters don’t know what to do in this new controversy-free post-World Series era in which we live.

Of course, with no big stories to dwell, we simply overanalyze the little ones. This winter, we spent more time than we wish to count pondering who might play left field and what Johnny Damon’s future might hold. Now that this saga has ended, we can move on the next great debate: should Curtis Granderson play left or center field? What about Brett Gardner? In the grand scheme of the Yankees’ 2010 season, it won’t matter too much, but Spring Training is the time to find out.

Yesterday, though, an in appearance on Sirius XM’s MLB Home Plate Jody McDonald and Jim Bowden spoke to Brian Cashman about the Granderson position debate, and the Yanks’ GM virtually ended the discussion before it could drag on throughout March. “He’s our center fielder,” he said. “We traded for him to be our center fielder.” Cashman continued on for some time:

I think that what’s taken place is when you’re asked questions like ‘Is there a possibility of Gardner playing center?’ I’m like, well, if we feel Gardner makes us our best team with Gardner at center because we’re blessed to have two above average center fielders patrolling Yankee Stadium’s outfield out of the three man alignment. So we have [Nick] Swisher in right, Granderson in center and Gardner, assuming he holds it down and wins it, will be in left.

So in fairness we acknowledge that but does that mean it’s the right thing to do to move Curtis Granderson over to left? I’m not saying that but I’m also open minded to say, alright, we’ve got a new player. We’re gonna see how our team fits and we’ll make decisions accordingly as we see things playing out. But Granderson’s our center fielder.”

It seems that the Yankees’ defensive metrics line up nicely with the argument I put forth last week when I suggested that the Yanks use Granderson in left and Gardner in center. Still, the team can’t be faulted for going with the career center fielder instead of the still-young Gardner. The tandem will cover a lot of ground in the outfield, and Granderson’s bat plays well in center.

Cashman’s discussion here also could be read as a tacit admission that Gardner is not a long-term solution to an outfield position on the Yanks. The team has been rumored to be interested in Carl Crawford, and the Yanks would rather not move Granderson from center to left and back to center again over the span of one or two seasons. He has a good enough glove to do it, but teams prefer consistency and predictability over the course of 162 games.

Meanwhile, during the same interview, Cashman cleared up another Spring Training mystery of sorts. He also told Bowden that Nick Johnson would bat second for the Yanks. Sticking a guy with an on-base percentage over .400 in front of Mark Teixeira and A-Rod is a recipe for runs, runs and more runs.

And so here we are, just under 40 days away from Opening Day, and the 2010 Yankees are coming into view. The team features a solid core of athletic players, some top pitchers and some heavy hitters to complement the best closer in all of baseball. Bring on the baseball.

Salvaging a bad investment
Walks a concern for Burnett, but so are ground balls