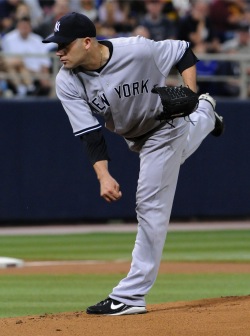 Who would have thought that signing Chan Ho Park would cause such a ruckus? When pitchers and catchers reported two weeks ago the bullpen situation seemed set. Seven spots, seven pitchers. Then came Chan Ho, making eight pitchers for seven spots. Since then we’ve wondered who will take the fall. Ben wrote about it this morning, and Mike followed up with an excellent point on why Hughes, if he loses the 5th starter competition, should stay with the team in the bullpen.

We’re back, then, to the issue of who goes. As a hundred people and I bet between 80 and 90 say Sergio Mitre. The problem, as Ben noted, we can’t just assume the Yankees will trade him. I further doubt that they’d place him on waivers, since the team apparently likes him, and doesn’t want to reduce its leverage in a potential trade. It’s possible, of course, but I wouldn’t consider it likely right now. That could change, as always, between now and the end of March.

One option I’ve seen floated by a few writers is sending Al Aceves to AAA. He has options so it would be a painless process. Then, when something goes wrong — a pitcher gets hurt or pitches terribly — the Yanks can call up Aceves. Further, since he’d probably work as a starter in AAA they could have him both spot start and pitch out of the pen. They did this last year, optioning Aceves to start the season but recalling him in early May after the bullpen fared horribly in April. If it worked last year, I doubt the Yankees would rule it out this year.

Even still, I’m not convinced it’s right move. The team started out poorly last April, and the bullpen’s 55 runs allowed in 71 innings did not help matters. They recovered, turning the bullpen into a strength by mid-season. While the idea would be the same this year, there’s no guarantee that the Yankees can fight back from behind for a second straight year. With both the Red Sox and the Rays in the division, the Yankees should think only about bringing their best 25 players to the Bronx. They shouldn’t handicap themselves because of service time and option statuses.

In the past, I’ve argued that sending Hughes to AAA wouldn’t hurt that much. If the bullpen has holes, they can always recall him in a relief role. If the bullpen performs fine, he can continue building his innings in pursuit of pitching in the rotation without restrictions in 2011. That, however, runs contrary to another point I preach every April: a game on April 6 counts the same as a game on September 26. The implications might be different, but the win counts for just one. Wins now theoretically take the pressure off those late September games. In other words, sacrificing games in April makes no sense, even if the Yankees have shown over the past few years that they can overcome a poor start. Past performance, after all, does not guarantee future gains.

Last year Aceves showed that he can provide quality relief innings. Not only can he go multiple innings, a strategy I’d like to see employed more frequently, but he also fares well in his single-inning stints. Though only eight of his 42 relief appearances lasted exactly one inning, he allowed just four hits in them, facing just three batters over the minimum. That’s a short sample, and won’t accurately forecast his one-inning appearances in 2010, but we do know he’s succeeded in those short outings. Given the rest of his 2009 season, he should get a shot to show that he can sustain the performance.

While the Yankees have rallied back from early season deficits before, they shouldn’t count on doing that every year. For every 2007 and 2009, there’s a 2008. Falling behind becomes an even tougher scenario for the Yankees, who share division space with perhaps the two other best teams in the AL, the Red Sox and the Rays. The way to avoid falling behind — or at least to put all your resources to preventing it — is to bring your best 25 players north. Given his performance last season, Al Aceves figures to be in that group. Not only is sending him to AAA a waste of his talent, but also could hurt the team. The Yanks have every reason to start him in the major league bullpen.

Why sending Hughes to the minors is a waste
Linkage: Upton, Montero, Rivera