Last time the Yankees faced the Twins, they were coming off a minor losing skid, having dropped three of four to the Tigers. For the first two games the Yankees had it together, and they clinched a series win before melting down on Sunday. This time the Yanks were coming off two straight series losses, including losses in six of their previous 10 games. Once again they’ve used the Twins as a prop. They finished what they started earlier in the day, and then came back to win a whole game, played all at once.

Biggest Hit: Swisher goes where few have gone before

Andy Pettitte kept the Twins’ offense under control for most of the game. After allowing a run in the first he worked through the Twins lineup with aplomb, throwing 72 of his 94 pitches for strikes. Heading into the bottom of the seventh he had a lead, but one pitch changed that. With a 2-0 count on Delmon Young, Pettitte delivered a fastball outside. Young smacked it over Brett Gardner’s head. Running from first base, Michael Cuddyer read it all the way and came all the way around to score. That tied the game and put pressure back on the laboring Yankees’ offense.

As Justin Morneau displayed on Tuesday, hitting the ball to right at Target field is not like hitting the ball to right at Yankee Stadium. Not only is the fence 20 feet deeper, but it’s probably four times as high. It must be tough for a lefty to hit one out there. Morneau might agree, as nine of his 11 home runs have come on the road. The Yankees needed a run in the ninth, especially after what Pettitte had done in the eighth. With Brett Gardner and then the top of the order due up, the Yanks stood a decent chance.

Gardner worked the count full before popping one up right around second base. Jeter saw a hanging breaking ball high in the zone and had the right idea. The pitch was just a bit too high for him, though, and he just got under it. That brought up Nick Swisher with none on and two out.

Jon Rauch stayed away from his fastball when dealing with Swish. His first-pitch curveball crossed the top of the zone for strike one. The next pitch, another curveball, fell a little low, though it was a well-placed pitch. Rauch went to the changeup next, and he left it right out over the plate. Swisher took a swipe at it, and a few seconds later it had landed in the seats. It was Swisher’s eighth home run on the season. He also hit his seventh double in the first.

Heading into the eighth it looked like Andy Pettitte was on pace for a complete game. He’d thrown just 83 pitches in the first seven innings. He’d need only 14 pitches to get through the eighth, but it they were a stressful 14 pitches. Drew Butera made it tough right from the start, doubling on Pettitte’s second pitch of the inning. The ball actually hit a running Brett Gardner in the glove, but he couldn’t hang on. Denard Span tried to bunt him over, and after a foul on the first pitch he got one down towards third. A-Rod overpursued a bit, flubbing the ball and allowing Span to reach and Butera to advance.

The situation could not be more dire. First and third, none out, and only Orlando Hudson standing between Pettitte and the heart of the Twins’ order, Mauer and Morneau. Pettitte’s teammates were partly responsible for the baserunners, but Pettitte himself had to work out of the jam. He got off to a good start by getting Orlando Hudson to line right back to him. The baserunners froze, leaving no chance of a double play, but Pettitte still had an incredible task ahead of him.

Last year, during his MVP run, Joe Mauer stepped to the plate 125 times with the possibility of a double play. He hit into only 13 of them. This year has treated him a bit differently. In 46 double play opportunities coming into last night, Mauer had hit into nine of them, or about double his rate from last season. Even so, it didn’t seem probable. When Joe Mauer comes to the plate, I always envision him getting a hit.

Pettitte worked the corners, throwing his first to pitches low and away before coming inside with the next two.With the count 3-1, Pettitte threw a cutter that probably would have ended a little off the plate. But Mauer swung, grounding it to Jeter who was playing up the middle. He flipped to Cano, who flung to Teixeira to complete the double play and get Pettitte out of the jam. At that point, the Yankees had to win the game for him.

Francisco Liriano was good, not great, last night. He had quality stuff, and it led to seven strikeouts and 10 groundouts, which is right around where Liriano wants to be. It might sound like a recent call-up like Kevin Russo would be overmatched, and during his first at-bat that did appear to be the case. Liriano threw him two fastballs and then buried two sliders inside for a swinging strikeout. The next two battles wouldn’t go so well for Liriano.

Robinson Cano singled up the middle to lead off the fourth, but neither Marcus Thames nor Francisco Cervelli could follow him. Cervelli ended up hitting into a fielder’s choice, just beating out the double play, and replacing Cano at first. Russo then came up with two outs. Liriano attacked him similarly, keeping almost everything inside. The last slider didn’t get quite far enough inside, and Russo pulled it down the line to left. Once it got to the wall Cervelli was almost guaranteed to score and tie the game at one.

With two outs in the sixth, Russo faced Liriano again, and for the second time manufactured a quality at-bat. He fouled off a fastball and then a slider, and on the sixth pitch of the at-bat he got a changeup low and away, which he pulled into left for a two-out hit. Brett Gardner followed by smacking a first-pitch fastball to right, sending Russo all the way home for the go-ahead run. Once again, the Yankees got some serious production from the bottom of the order, which compensated for the slumping middle of the order.

Mark Teixeira went 2 for 5 today, which was especially nice given his 0 for 4 performance the game before. His first hit was a bit of a cheapie, a pop up that found a hole in the defense. But as you’ll hear many a former player profess, sometimes those are the ones that help you break out. If that really was the magic potion that broke his slump, he showed it in the ninth.

After giving up the homer, Jon Rauch did to Teixeira what he would not do to Swisher: he threw a fastball. It caught the outside corner for strike one. He then went to the slider, which missed outside for ball two. It was slider again on the third pitch, and this one appeared to break below the zone. The ump never got a chance to call it, as Teixeira took a Teixeira-like swing at it, driving it into right field for what looked like a double. He got thrown out at second on a good throw and relay, but that’s not really the point. The pitch wasn’t particularly good, yet Tex still hit it on the screws.

Maybe, just maybe, that will get him going. Nobody needs it now more than Tex. 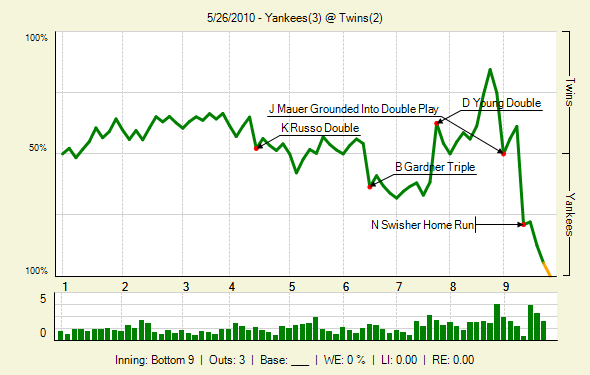 It’s another CDT game, 8 p.m., when Javy Vazquez goes for the Yanks against Nick Blackburn for the Twins.