With their heads held high after topping arch-nemesis Roy Halladay on Tuesday night, the Yankees showed up to the park on Wednesday with another reason to feel good about themselves: cleanup hitter Alex Rodriguez would be back in the lineup. Turns out that Babe Ruth and Lou Gehrig could have been in the lineup for all Jamie Moyer cared, he was that damn good. Thankfully Tampa Bay fell to Atlanta, so the Yanks are still tied atop the AL East with the game’s best run differential.

The key to the Yanks drubbing of Halladay on Tuesday night was a Brett Gardner bases loaded triple that split the outfielders and rolled to the right-centerfield wall, pushing three runs across and giving the Yankees a lead they would never relinquish. That seemed like a pretty good blueprint for victory, so the Phillies’ speedy outfielder went ahead and did the same thing in this game.

We’ll talk more about A.J. Burnett in a bit, but all you need to know right now is that he loaded the bases with one out in the 2nd inning by walking Raul Ibanez (on five pitches), allowing Greg Dobbs to single to right (scoring Ibanez), walking Brian Schneider (four pitches!!!), and taking a Wilson Valdez shot up the middle off his feet for a single. The Phightin’s had the bases loaded with one out, so Burnett did the smart thing and ran the count full to Shane Victorino.

Victorino had been hitless since last Thursday, but he didn’t a miss a sinker left letters high and out over the plate, rocketing it into the same right-centerfield spot as Gardner the night before. The bases cleared, the Flyin’ Hawaiian was standing on third, and the Yankees were down four runs before they even sent four men to the plate.

Following arguably the worst start of his career, 47-year-old Jamie Moyer took to the mound on Wednesday and did the exact opposite of what we all expected him to do: he dominated the Yankees. The only blemishes in his eight stellar innings of work were solo homers by Robbie Cano and Jorge Posada, but otherwise the Yankees didn’t put him in the stretch until the 7th inning, when A-Rod drew a one out walk. That baserunner was quickly erased with a 5-4-3 double play. It was one of those kinds of nights.

Moyer’s slow, slower, slowest approach simply befuddled the Yanks, who didn’t really hit anything hard beyond the homers. He got just two swings and misses out of his 107 pitches, and became the oldest pitcher to ever beat the Yankees. Not exactly how we drew it up.

With a chance to clinch the World Series last November, the Yanks sent Burnett to the mound in Game Five against the Phillies, and he promptly made a mess in the bed, to be candid. In that game he allowed six runs and eight baserunners in just two innings of work, which really isn’t much better than the six runs and 11 baserunners he allowed in 3.1 IP on Wednesday. Beyond the Victorino triple, Burnett also allowed back-to-back solo homers to Ryan Howard and Jayson Werth, the first time all year the Phillies turned that trick despite their … ahem … American League lineup.

Burnett simply didn’t give the Yankees a chance to win in this one, needing 87 pitches to record ten outs. Nothing quite boils the blood like a Bad A.J. start.

One good thing came out of Burnett’s horrific and short outing … well, I think it’s a good thing. If nothing else, it was fun to watch. Anyway, Boone Logan and Chad Gaudin, the two lowest members of the Yanks’ bullpen totem pole absolutely dominated the Phils for close to six innings tonight. I know, who saw that coming?

Logan faced nine batters, and got seven of them to either strikeout or ground out. Gaudin replaced him and sat down all nine men he faced without incident. It was Yeoman’s work out of the bullpen (/The Show‘d), with Logan and Gaudin keeping the Yanks in the game when Burnett couldn’t. Without them, the tying run doesn’t come to the plate in the bottom of the 9th.

Boy, that little rally off Brad Lidge wasn’t as big as we thought, eh? MLB.com has the box score, FanGraphs all the other stuff. 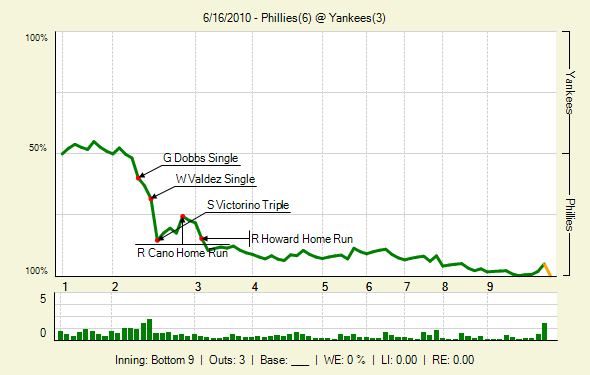 Rubber match is set for tomorrow evening at 7:05pm, and just like last November Andy Pettitte will get the ball to try and pick up the series win Burnett couldn’t. He’ll be opposed by Kyle Kendrick, who has turned all non-pitchers he’s faced into the 2009 version of Hideki Matsui due to a .289-.341-.510 batting line against. That has to be a trap, no?