River Ave. Blues » From Irabu to Swisher with a side of Justice
Catch RAB on The Pulse Network's Sports Buzz
If the Rockies are selling, should the Yankees be buying? 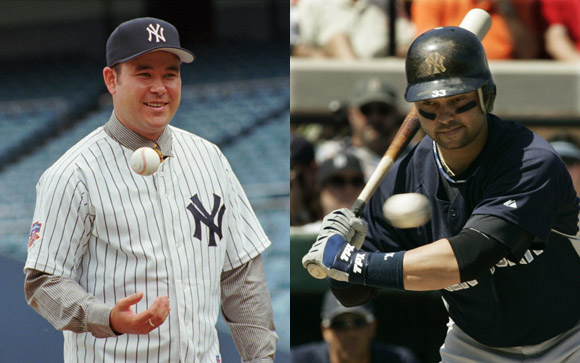 Once upon a time, the Yankees had to make a trade to get a player they coveted. Due to the vagaries of the Japanese league’s posting system and the international player market at the time, in April of 1997, the Yankees had to ship a package of players to the San Diego Padres for the rights to Hideki Irabu. The heralded right-hander — Japan’s Roger Clemens — had landed with the Padres in January but refused to play for anyone but the Yankees. So the Bombers sent Ruben Rivera, Rafael Medina — two amateur free agents the club had signed — and $3 million to San Diego. Today, they have Nick Swisher, and it’s all because of that trade from 1997.

Trade histories often run deep as multiple prospects and established veterans are shipped off for a variety of parts. Over time, those players acquired become key cogs in a system moving ever forward. Some contribute to championship clubs while others are repurposed in future trades while still others never make their mark on the game. The path from Ruben Rivera and Rafael Medina, a pitcher who threw 90.2 forgettable innings for the Marlins in the late 1990s, to Nick Swisher unveils the tale of the Yankees over the last 13 seasons.

In 1997, the Yankees were fresh off of their first World Series title in 18 years, but the club knew it had to both improve and look for ways to expand its market into the emerging international scene. With Jimmy Key pushing 35 and Dwight Gooden no sure thing, the Yanks turned their eyes to Irabu, a famous name in Japan, and landed him at the cost of Ruben Rivera, then one of the team’s top prospects. The Padres earned nothing much from the Yanks in that deal, but the Yanks didn’t get much from Irabu either.

Despite the hype, Irabu had a tenuous tenure with the Yanks. He incurred the wrath of George Steinbrenner when he failed to cover first base. The tabloids had a field day with him, and “fat pussy toad” still evokes images of Hideki Ira-boo-boo. Still, despite a 29-20 record with a 4.80 ERA (95 ERA+), Irabu pitched on part of two championship clubs even if he never earned himself a World Series invite. The Yankees eventually shipped him to the Expos for Jake Westbrook, Ted Lilly and Christian Parker, not a bad haul in the long run.

Westbrook, the sinker baller who lost to Javier Vazquez and the Yankees last night, was not long for the pinstriped world. Considered a top pitching prospect prior to the 2000 season, the right-hander appeared in three games for the Yanks. He went 0-2 and got shellacked to the tune of 15 hits and 10 earned runs in 6.2 innings. But the Yanks realized Westbrook’s true value in a late-June trade that still stands as one of Brian Cashman’s bests.

With the Yanks’ offense struggling, Cashman packaged Zach Day, Ricky Ledee and Westbrook to the Indians for David Justice, and the lefty with the sweet, sweet swing was an instant sensation. Over 78 games with the Yankees that year, he hit .305/.391/.585 with 20 home runs and seemed to carry the Bombers when they need a pick-me-up. In the ALCS against the Mariners, his towering three-run home run in the 7th inning against Arthur Rhodes set the stadium shaking, and it gave the Yanks a lead they would not relinquish. It also won him the series MVP award.

After a poor 2001 season, Justice’s time in the Bronx would be up as the club tried to get younger while filling roster holes. Although Justice would end up in Oakland in 2002, he spent one week in December with the Mets, an in return, the Yankees landed themselves Robin Ventura. The long-time White Sox stalwart had an unmemorable time in the Bronx. He hit 27 homers in 2002, but in the middle of 2003, he was mired in an offensive malaise. The Yanks shipped him and his .251/.344/.392 line to the Dodgers for Bubba Crosby and Scott Proctor.

As the Yankee Dynasty declined, Proctor came to stand for everything wrong with Joe Torre’s managerial approach. After two cups of coffee in 2004 and 2005 where he flashed plus stuff with little command, Proctor stuck in 2006 and earned a spot in the Circle of Trust. He made 83 appearances and threw 102.1 innings of decent relief work. In 2007, after Proctor had made 52 appearances in the club’s first 103 games, Brian Cashman took away Torre’s favorite toy and traded him to the Dodgers for — drumroll, please — Wilson Betemit. (Proctor, of course, met his demise when Torre took over the Dodgers in 2008 and used him again in half of the club’s games until his elbow gave out. He has yet to pitch in the Majors since.)

We all know the rest of this story. Betemit was an underperforming backup infielder who had some power but couldn’t field a lick. With Swisher’s bad 2008 fresh in his memory, Chicago White Sox General Manager Ken Williams traded Swisher and Kanekoa Texeira to the Yanks for Wilson Betemit, Jhonny Nunez and Jeff Marquez. It too stands out as one of Brian Cashman’s all-time heists.

Inevitably, this week, the Yankees will move some players and acquire others. They want bullpen help; they need bench help; and they appear to be lurking on the wings of some starting pitching rumors, waiting to pounce. In 13 years’ time, who knows which trade will take on a journey through recent Yankee history? This tale — one that, for now, ends with a home run last night and an All Star Game appearance — started with an overhyped Japanese pitcher, a top outfield prospect and a team hellbent on getting its man. Somehow, that Irabu deal turned out OK so many years later.

Catch RAB on The Pulse Network's Sports Buzz
If the Rockies are selling, should the Yankees be buying?