There’s nothing quite as exciting as Opening Day, not after five long and cold winter months without any actual baseball. Rumors and signings and trades are fun, but nothing compares to the games. Yet once the season starts, everyone has the same complaint: what’s up with all the days off? As you know, it has to do with the weather. April showers bring May flowers lots of off days because baseball doesn’t want there to be an overload of doubleheaders early in the season. As annoying as it is, the logic is sound.

All those days off are a nuisance to us fans after the long offseason, but they can benefit the 2011 Yankees quite a bit. You may or may not have heard, but the Yanks have a bit of a fifth starter problem. Actually, it’s more like a fourth and fifth starter problem, though I’m down with giving Ivan Nova a chance given the lack of alternatives. Sergio Mitre is another story all together. No one has any faith in him being even a slightly below average big league starter, especially in the AL East, but that’s where the schedule comes into play. The off days in April give the Yankees ample opportunity skip him.

Pictures are worth a thousand words, so I grabbed the early season schedule off the official site and laid out the starting pitching plan. The identities of SP1 through SP4 are irrelevant as long as SP5 is the guy we’re trying to avoid, which in this case is Mitre. The number in parenthesis is the number of days the pitcher has had off, so (4) is normal rest. Here’s March/April… 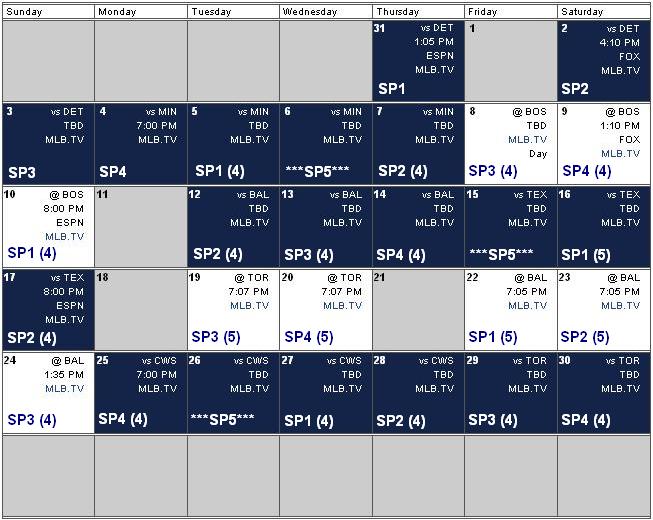 As you can see, the Yankees will only need their fifth starter three times in the season’s first month, a span of 27 games. The front four also gets a nice little break during the week of the 17th in the form of an extra day of rest. SP5 and SP1 could be flip-flopped on the 15th and 16th, but doing so will give SP1 one start with two extra days of rest (on the 22nd) rather than two starts  with one extra day of rest each (16th and 22nd)  I just spread the rest around a bit, but in the end it doesn’t really matter. An added benefit is that the fifth starter will be available out of the bullpen for at least a few days in between starts, taking the load off the regular cast of relievers in early going.

There’s not much to see during the first few weeks of May since the Yankees will have to stay on rotation through the ninth, their first off day of the month. If they stay on rotation after the day off, they’ll be able to trot out their top three starters against the Red Sox on the 13th through 15th. All told, the Yankees will have to use their fifth starter just six times in the season’s first 42 games. The less Mitre the better, but if they have to start the season with him in the rotation, at least they can spread out the damage, so to speak.

Of course all of this is academic and so, so much can change between now and then. The weather could decide not to play nice, maybe someone gets hurt, maybe Mitre comes out and dominates one or two guys surprise and get a little more responsibility, who knows. As it stands, the Yankees can avoid their fifth starter quite a bit in the early going, and it could give them enough time to find a better solution than what they have right now.