Something tells me we’re going to see a whole lot of this game on Yankees Classic in the future. Derek Jeter became the 28th man to pick up 3,000 career hits in the most improbable fashion, belting his third homer of the season and his first outside-the-park homer at Yankee Stadium since last June. The Yankees won, but that’s almost secondary.

The crowd was on their feet before he even left the on-deck circle. Jeter was still two hits away from the milestone, but he had to get number 2,999 out of the way before he could move on to bigger and better things. David Price went right after Derek to start the game, pumping fastball after fastball after fastball to lead off the first. The first few were 93, then it was all 95+ after that. Jeter worked the count full and fouled two pitches off, and on the eighth pitch of the at-bat he grounded a little seeing-eye single through the left side. The Yankees didn’t score in the inning but that was just a little sidebar, the Cap’n was just one hit away from history.

It could have come at any time, on any pitch. We could have had to wait all afternoon, all weekend, until after the All-Star break, but thankfully we didn’t. The Yankees were down a run in the third inning when Jeter came up for the second time, but this time Price tried to mix things up. A first pitch fastball was wide for a ball, a second pitch changeup swung over for strike one. Derek took another fastball for a ball, fouled off a changeup, took a slider for ball, fouled off a fastball, and fouled off another changeup.

The eight pitch of the at-bat was a hanging curveball and Jeter didn’t miss it. It was a no-doubt hit off the bat, the only question was where it would land. In the gap? Off the wall? Over the fence? Nothing of it would have surprised us a moment after contact. As fate would have it, the ball cleared the fence by a plenty, landing in the first row of the left field bleachers in the hands of Mr. Christian Lopez, a 23-year-old cell phone salesman from Middletown, New York, who was only at the game because his girlfriend got him the tickets a few weeks earlier.

Jeter rounded the bases as the crowd cheered and chanted his name, and he was greeted at the plate first by Jorge Posada and then Mariano Rivera. Former Yankee Johnny Damon and the rest of the Rays came out of the dugout to applaud as Jeter hugged teammates and waved to his family, a celebration that lasted a good five minutes after the ball left the bat. Jeter had achieved immortality and as a nice little fringe benefit, he tied the game at one.

As for young mister Lopez, he was whisked away by security and offered the ball back to Jeter for the low, low price of free. He asked for nothing, but the Yankees rewarded him anyway. He’ll sit in the Legends Seats tomorrow and receive four Championship Level tickets to each game for the rest of the season, playoffs included. That’s on top of all the signed bats and balls and what not. Not a bad haul for the young man, and not a bad first three innings for Jeter.

The Rays regained the lead and were up by one the next time Jeter came to the plate, leading off the fifth inning. Price’s pitch count was already at 92 when Derek jumped on a first pitch curveball and drove it into left for the leadoff double. Just like that, he was 3-for-3 with two extra base hits. Curtis Granderson singled him in one batter later, and the Yankees took the lead on Robinson Cano’s sacrifice fly two batters after that.

The Fourth One Is For Show

The Yankees were nursing that 4-3 lead when Jeter came up in the sixth inning, this time against righty reliever Brandon Gomes. The rookie gave Derek two fastballs with Brett Gardner on the first, the second of which he slashed through the right side for a single. It was a vintage Derek Jeter hit, that same inside-out swing he’s used for a decade-and-a-half now. The Yankees didn’t score in the inning but Jeter had four hits (and counting).

Eduardo Nunez did a bang-up job filling in for Jeter while he was on the disabled list with his calf injury, but this game was not an either/or proposition. Both players were in the lineup, and they combined to give the Yankees back the lead in the eighth inning. Nunez led off the inning by doubling down the line into the left field corner (his helmet popped off while running, naturally), then Gardner bunted him over to third. Jeter was up and the infield was in.

Derek was already the star of the day regardless of what happened from that point on, but 4-for-4 wasn’t enough. Joel Peralta gave him a first pitch fastball for a called strike, then he went splitter, splitter, splitter. Jeter responded by taking for a ball, swinging for a strike, and singling back up the middle, respectively. His fifth hit of the day was a little bleeder through the drawn in infield, bringing in Nunez for what proved to be the game-winning run. It was the first five-hit game by any player in the New Yankee Stadium and the third five-hit effort of Jeter’s career, the last coming against this same Tampa Bay franchise in 2005. We’re always going to remember that homer, the milestone blast, but it was this final hit that decided the game.

Oh by the way, some other players played in this game as well. A.J. Burnett was getting swings and misses like they were going out of style (16 in 89 pitches, 18%) during his 5.2 IP of work, striking out nine. Just 11 of the 23 men he faced put the ball in play, but two of those balls in play were homeruns. The first was a monster solo shot by Matt Joyce into the suite level in right, the second a two-run oppo bomb by B.J. Upton. The nine strikeouts were Burnett’s most since September 23rd of 2009, when he fanned eleven Angels. His stuff has looked especially nasty in his last two or three outings, but he’s still prone to that one big mistake.

Boone Logan and Cory Wade each retired two batters before David Robertson blew the one-run lead in the eighth. He’s done a great job of wiggling out of jams, but pitching around a Damon leadoff triple (assisted by Granderson slipping on the warning track) was just too much to ask. Ben Zobrist singled to the tie the game, but otherwise Robertson pitched out of the inning. Mo was perfect in the ninth, retiring the side on just eleven pitches.

For the first time since May of 2009, Jeter has an extra base hit in four consecutive games. He’s gone 9-for-23 (.391) with four doubles and a homer since coming off the disabled list, and it seems like he’s swinging the bat way better than he did before the injury. Derek mentioned after the game that he worked on staying back while on rehab, so maybe that did it. I really don’t care what it is, but I’m enjoying this vintage 1999 model of the Cap’n.

The win is just the Yankees’ second in their last six games, but it’s also their 13th in their last 19 games. Sunday’s game would be a fine one to win so that we can all head into the All-Star break feeling good about where the team sits.

All Jeter, all the time. MLB.com has the box score and video, FanGraphs whatever else your heart desires. 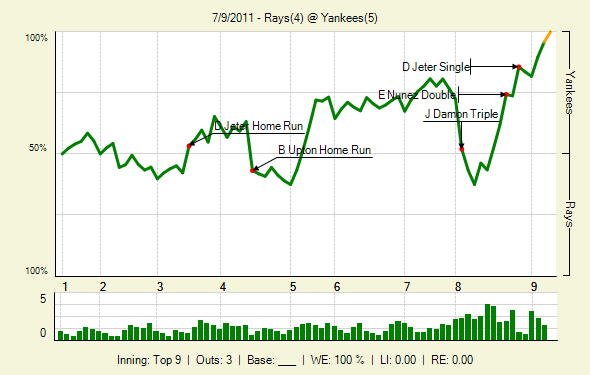 CC Sabathia will start the rubber game of this makeshift three-game series a little later today. Jamie Shields gets the ball for Tampa. If you want to head out to the Stadium, RAB Tickets can get you there on the cheap.