That Yankee team dropped two of three to the Reds at home, while last year’s squad took two of three at Cincinnati last June. The 2011 series at the Great American Ballpark featured what to this day probably remains Ivan Nova’s finest career start (at 8.0 innings, it’s still his longest-ever outing), as well as a huge outing from Reds ace Johnny Cueto (and two homers from Chris Heisey of all people) in the finale, helping Cincinnati stave off a sweep.

The Reds come into this series at 19-18 and in 2nd place in what appears to be a rather weak NL Central, with a zero run differential largely on the strength of their bullpen, which is 4rd in the Majors in ERA and first in FIP. The bullpen’s stellar performance is almost solely the result of the work of Aroldis Chapman, who’s been the best reliever in the game thus far on the season, having yet to allow an earned run and striking out an outrageous 15.9 men per nine, and nearly 50%(!) of all batters he’s faced — both marks are tops among all relievers in MLB. Closer Sean Marshall is also taking care of business, giving the Reds one of the best end-games in the bigs.

Cincinnati’s starting rotation has been slightly below-average in the aggregate (103 ERA-/108 FIP-), although Cueto is once again killing it (1.89 ERA/3.30 FIP), despite a sub-6.0 K/9. My initial thought was that he was presumably getting it done with groundballs, but he’s only at 45%. What he is doing is limiting the damage like few other starters in the game at the moment, as his 84.8% strand rate ranks ninth among all qualified starters in MLB. I don’t know how he’s doing it, but he’s been tough with runners on (92 sOPS+) and even tougher with runners in scoring position (76 sOPS+). Everyone else in the Reds’ rotation has pitched to mostly mediocre results — aside from Bronson Arroyo, for some reason — but the Yankees will of course see both Cueto and Arroyo this weekend.

One aspect that’s been a hallmark of recent Reds teams that has been largely missing from the 2012 squad is a robust offense — the team currently boasts a Seattle Mariners-esque 85 wRC+. Joey Votto (184 wRC+) and Jay Bruce (149 wRC+) are monsters, but outside of those two Cincinnati’s lineup only features two other above-average hitters, second-year third baseman Todd Frazier (170 wRC+) and catcher Ryan Hanigan (101 wRC+) and so the Yankees would do well to avoid Votto and Bruce like the plague and challenge the remainder of a rather unimpressive lineup.

Of course, the Yankees have had their own unique and frustrating brand of offensive challenges in the month of May. Last night’s pathetic 4-1 loss to the Blue Jays — their fourth loss in their last five games, with three of those losses coming at the hands of pitchers they should have absolutely obliterated in Kevin Millwood, Kyle Drabek and rookie Drew Hutchison and all four losses featuring the Yankees scoring two runs or less — put the team in rarefied air, as according to ESPN’s Katie Sharp, it was 9th time in 38 games the Yankees scored 1 run or fewer, something that hasn’t happened to the team since 1984(!). The other mind-blowing stat that followed last night’s game came from Jack Curry, who noted that the Yankees are three for their last 41(!) with runners in scoring position. That’s almost impossibly bad, and stands to correct itself in short order.

Still, despite a heaping amount of offensive ineptitude during May, the Yankees have rather surprisingly actually boasted an above-average offense on the month, with a 105 wRC+. As frustrating as the team has been to watch for much of the past two weeks, we know the talent on the roster is better than this. With the starting pitching continuing to improve — although it’s pretty sad that a 5.07 ERA in May constitutes improvement — once the bats wake up we should see a vastly different Yankee team sooner rather than later.

In 39.2 career innings against the Bombers, Arroyo has been tagged for a .294/.358/.479 line. The one thing working in Arroyo’s favor is that the Yankees haven’t seen him in seven(!) years, so don’t be too surprised if he’s able to take advantage of some classic guy-the-Yankees-have-never-faced-before chicanery. The incredibly slow-throwing (86mph four-seamer, 87mph two-seamer) Arroyo makes judicious use (27%) of his slow 76mph slider and complements it with a sinker (20%). Given sinkerballers’ relative success against the Yankees of recent vintage, along with the fact that Arroyo also has a curveball, changeup and cutter, which means he features six pitches at least 10% of the time, this may also spell trouble for the Bombers. But again, given Arroyo’s weak-ish peripherals (6.7 K/9, 35% GB%, .333 BABIP), it would be pretty disappointing if the Yankee offense can’t get to its onetime Boston nemesis.

Bailey is a righthander the Yankees have never faced before, which has at times been a death knell for the Yankees. However, Bailey has also occasionally been referred to as Cincinnati’s version of Phil Hughes, which may or may not be a good thing, depending on your perspective. Bailey has a 93mph fastball he uses 50% of the time, a 93mph two-seamer he uses 16% of the time, an 87mph slider he uses 17% of the time, an 85mph change (9%) and a 78mph curveball (8%), so aside from the mutual disappointment surrounding the respective developments of the one-time can’t-miss young righthanders, they don’t really have anything in common arsenal-wise aside from live fastballs.

Cueto relies primarily on his 92mph two-seamer (38%), complementing it with an 82mph slider (28%), 92mph four-seamer (17%) and 84mph changeup (16%). Cueto’s repertoire doesn’t exactly scream overpowering, but I’d gather the mix of two-seamer/slider as opposed to the more traditional four-seamer/slider has had something to do with his success. Cueto got roughed up in his previous outing against the Braves, only going four and giving up six runs (five earned). Sabathia himself will be looking to bounce back from a disappointing start in Baltimore, and is facing the Reds for the first time since he was a member of the Brewers in 2008.

Between the Yankees’ significantly superior offensive unit — at least, on paper — along with the fact that the Reds have been even worse during May (88 wRC+) than the Bombers have plus seemingly favorable matchups in both the Friday and Saturday games, the Yankees should probably take two of three from the Reds. Though that may be asking a lot of a team that just dropped three straight winnable games to division rivals.

If they can take the first two obviously there’s a lot to like about their chances for a sweep with Sabathia on the hill on Sunday, although Cueto is just the kind of tough hard-throwing righthander that’s given the Yankees a lot of trouble this season, and I don’t know that I feel confident enough in the current feast-or-famine iteration of the Yankee offense to topple Cueto. 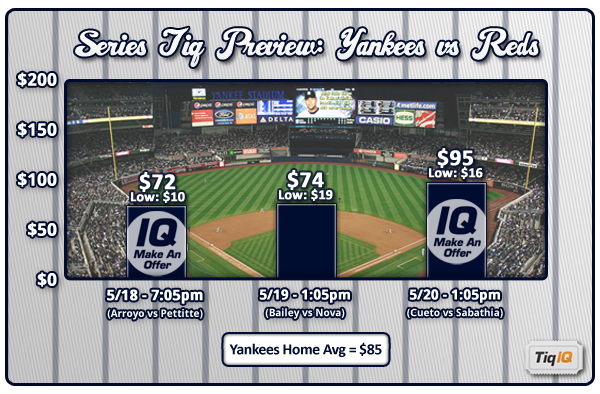 As always, RAB Tickets has your connection for seats, and this weekend, we have a special offer from TiqIQ: With the Reds coming to town this weekend, we’ve got an opportunity to “ScoreBig” and make an offer and save off the retail price of tickets for Sunday from our partners @ TiqIQ. Moreover, in addition to the savings on “Make an Offer” inventory, you can save an another $15 off your total price. Just click the image to name your price.

Our partners sent us the following cheat sheet: