The season is officially on the line tonight, as the Yankees are one loss away from an embarrassing sweep at the hands of the Tigers in the ALCS. CC Sabathia will be on the mound on regular rest and that’s exactly who the Bombers want out there, but pitching hasn’t been the problem. The hitting has been, and tonight the batters will see hard-throwing right-hander Max Scherzer.

Scherzer, 28, went to the Tigers in the trade that brought Curtis Granderson to the Yankees, and he’s shaken off concerns about his durability by throwing at least 185 innings in each of the last three seasons. He’s got a little A.J. Burnett in him in the sense that he’s enigmatic and is more hittable than his stuff indicates he should be, but Scherzer is still pretty good. He just happens to be the fourth best starting pitcher in his own rotation.

Just the one ugly start back in April, that’s it. Andruw Jones went 2-for-2 with a homer and a walk off the bench in that game, that’s how long ago it was. Those seven walks are a career-high for Scherzer, who struggled big time in April before pitching very well the rest of the season. Despite only the one meeting this year, both sides are certainly familiar with each other though after the ALDS last season and various regular season matchups (four total, to be exact) since the trade that brought Scherzer to the AL. 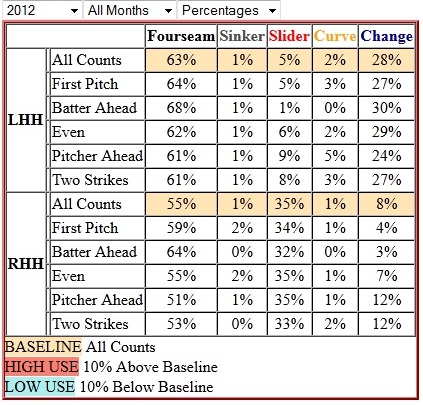 Scherzer is a three-pitch pitcher who acts like two two-pitch pitchers. Right-handers get the fastball and slider while lefties get the fastball and changeup. That’s pretty much it, he’s very straight forward. The fastball usually sits comfortably in the mid-90s, but Scherzer has been battling some shoulder fatigue lately and he’s been sitting the low-90s more often than not. We really don’t know how much that will help the hitters if it continues tonight, but I can’t imagine it’s a bad thing for the Yankees.

Unlike Justin Verlander yesterday, Scherzer has a significant platoon split. The guy eats up right-handers but has his struggled against left-handers because he doesn’t strike them out nearly as often and will walk them more frequently as well. It’s worth noting that some poor ball-in-play luck (.378 vs. 273 BABIP) plays a part in the huge split.

Regardless, it goes without saying that the Yankees have to take advantage of that, perhaps by again sitting Alex Rodriguez in favor of Eric Chavez even though neither guy is really hitting. Joe Girardi could trot out a lineup with only two true right-handed hitters — Russell Martin and Eduardo Nunez/Jayson Nix — and those guys could easily bat eighth and ninth. Last night’s ninth inning mini-rally was encouraging if nothing else, and today the Yankees have a chance to build on it and actually generate some offense by stacking lefties against Scherzer.