As we discussed earlier, Russell Martin’s first 100 games of the season were a nightmare offensively. He hit .182/.300/.364 in his first 283 plate appearances and the Yankees were sliding in the standings. The trade deadline brought no catching help, so any improvement down the stretch was going to have to come from Martin himself. It was easy to have no confidence in him.

Instead of continued to falter, Russ turned things around. He went 2-for-2 with a homer and two walks in Game 101 and 8-for-22 (.364) with four walks in the next seven games. He doubled in his next game, homered a week after that, and homered again a few days later. On September 5th, the team’s 136th game of the season, Martin went 2-for-4 with a double and a homer to raise his season battling line to .202/.305/.376. It was very late in the season, but he was above the Mendoza Line for good.

Along with deadline pickup Ichiro Suzuki, Martin was arguably the Yankees’ very best hitter in the final month of the season. He hit .277/.355/.578 with seven homers in the club’s final 28 games of the year, including .375/.500/1.000 (!) with runners in scoring position. Russ hit walk-off homer against the Athletics (video) on September 21st, and three of those seven homers either tied the game or gave the Yankees the lead. Martin didn’t hit a lick in the postseason like most of his teammates, but he did hit the game-winning homer off Jim Johnson in Game One of the ALDS. That was enormous.

Despite all those late-season homers, the 62-game hot streak to close the season was fueled by a BABIP return to normalcy… 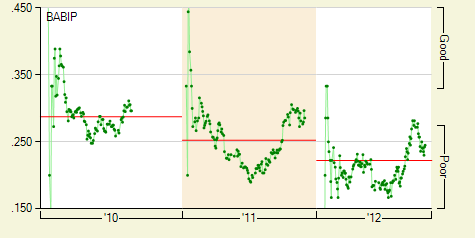 As I wrote this morning, you would expect Martin to have a low-ish BABIP because of the type of hitter he is, but anything below .200 is venturing into massively unlikely territory for any player. He enjoyed a .271 BABIP in the final 62 games of the season, which is right around his true talent level based on recent years. That raised his season line up to  .211/.311/.403, a 95 wRC+ that was a bit below the league average overall but actually identical to the MLB average for the position. Catchers get a little slack.

If there’s one thing we learned about Martin offensively these last two years, it’s that he can be very streaky. The downs are longer and more frequent than the ups, but the ups are power-filled stretches with a lot of clutch hits. Martin always seems to put quality at-bats together as well, even when he’s struggling, and he never seems to take his problems with the bat out to the field defensively. He’s no Jorge Posada, especially at the plate, but Russ has been serviceable if not solid for the Yankees at the catcher position these last two years and especially down the stretch in 2012.