The 2013 season is over and now it’s time to review all aspects of the year that was, continuing today with the captain who wasn’t around to go down with the ship.

This was the season Derek Jeter was never supposed to have. He’s Derek Jeter. Things are always supposed to go his way, and if they don’t, he proves people wrong and makes them go his way. Last season was a perfect example. The Cap’n was supposed to be finished, a washed up former star who was losing a fight with Father Time. Instead, he led the big leagues in hits (216), at-bats (683), and plate appearances (740). Thirty-eight-year-old shortstops aren’t supposed to do that.

Jeter finished that remarkable season on a down note, playing through a bone bruise in his left ankle during the month of September before it finally gave out and fractured in Game One of the ALCS. He had surgery in late-October and although the rehab timetable meant things would be tight, it appeared he would be ready in time for the start of Spring Training. Unfortunately, Father Time started started to win the war after losing the battle in 2012. 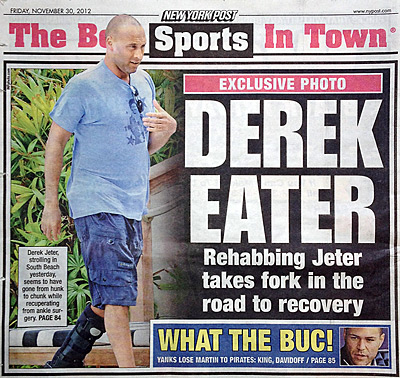 The offseason was full of gossip stories about Fat Derek Jeter and reports that his rehab was right on schedule. The Cap’n emphatically said he was working hard and would be ready in time for camp. Ultimately, that was not the case. Jeter’s rehab had slowed down at some point and he was far behind the other position players in Spring Training. He didn’t play in his first Grapefruit League game until mid-March and only appeared in five total, as many as Cito Culver. It was clear he would not start the season on time.

Jeter opened the 2013 campaign on the DL as he continued his rehab from the ankle surgery. In early-May, right when everyone was expecting him to return to the lineup, the Yankees announced their captain had suffered a major setback — there was a new fracture in the ankle, a smaller hairline crack that would nevertheless keep him out until the All-Star break. New York was getting nothing offensively from Eduardo Nunez and Jayson Nix at the shortstop position, so the setback was a big blow.

It wasn’t until July 11th, four days prior to the All-Star break, that Jeter joined the team. He played in only four rehab games and was rushed back to serve as the DH when Travis Hafner’s shoulder started barking (again). Jeter was in the lineup for the series finale against the Royals and his return lasted all of eight innings. He legged out an infield single in his first at-bat of the year but felt tightness in his right quad when he tried to do the same a few innings later. The Yankees kept Jeter active over the weekend and through the All-Star break to see if he’d feel better, but that didn’t happen and back to the DL he went.

The second DL stint was shorter, only 17 days total. Jeter rejoined the team one day prior to a West Coast trip through two NL cities that would force him to play the field. That (second) first game back from injury resulted in one of the most memorable moments of the season, a first pitch solo homer off Rays left-hander Matt Moore:

Jeter played a total of four games at shortstop (the game against the Rays and three on the West Coast) before his right calf started acting up. Tests revealed a Grade I strain and just like that, the Cap’n was right back on the DL. This stint lasted 24 days. When he returned on August 26th, the team’s 131st game of the season, the Yankees were seven games back in the division and six games back of the second wildcard spot.

Following the third DL trip, Jeter stayed healthy for approximately two weeks. He wasn’t all that effective, going 9-for-48 (.188) with one extra-base hit (a double) and ten strikeouts while playing ten of 13 games at shortstop. After missing so much time due to injury and only playing in seven rehab games — that’s seven rehab games total: four coming back from the first injury, zero coming back from the second, three coming back from the third — it was no surprise he showed considerable rust at the plate. The problem was the Bombers were slipping in the standings and couldn’t afford the lack of production.

Jeter’s season came to an end on September 7th, when he exited a game against the Red Sox in the sixth inning with soreness in his surgically repaired left ankle. Tests came back clean but he was going to sit a few games before returning to the lineup. The team didn’t want to risk yet another setback. Four days later, with the Yankees sitting ten games back in the division and three games back of the second wildcard spot, Brian Cashman announced Jeter was being placed on the DL to prevent him from pushing too hard to come back after the doctor said he needed to strengthen the area around his ankle before returning. Jeter’s fourth DL stint of 2013 ended his season.

All told, the Cap’n hit just .190/.288/.254 (48 wRC+) in only 17 games around the various leg injuries this past season. He made four separate trips to the DL this summer after making four total from 1999-2012. The Yankees never really came out and said so, but the team and their doctors gave indications the leg injuries were all related — Jeter was compensating for one injury but putting extra stress elsewhere on his body. Certainly sounds reasonable, especially with leg injuries, but at the end of the day it doesn’t really matter. Jeter missed all that time and it hurt the team dearly in 2013.

Rather than wait for him to exercise (or decline) his $9.5M player option for next season, the Yankees re-signed Jeter to a one-year contract worth $12M about two weeks ago. They reportedly agreed to the increased salary (and luxury tax hit) in exchange for avoiding a repeat of their contentious negotiations from three years ago, which only makes sense if Jeter’s camp indicated he was prepared to decline the player option and ask for more money. The Cap’n had no leverage following his self-proclaimed “nightmare” season but the Yankees gave into his demands anyway. Jeter is a total unknown heading into next season but the team paid him as if he’ll be a big time contributor because hey, he’s Derek Jeter and things are always supposed to go his way.