River Ave. Blues » Random YouTube Videos of Current and Ex-Yankees
Thoughts after the Yankees lose out on Yoan Moncada
Yankees may have missed an opportunity to bring back Brandon McCarthy

I don’t know what y’all do on spare times but for me, sometimes (or more than I’d like to admit), I like to look for random baseball videos on YouTube. Once in awhile, I run into a gem that I end up bookmarking … and watch again in an hour or two or so. It’s not that I don’t get bored too easily — I’m graduating from college this May so can’t really afford to goof too much (applying to jobs and whatnot) — it’s that YouTube … basically dominates a lot of facets of my internet life. It’s inescapable … but it’s not like I ever tried to give up YouTube for lent or anything

1. David Cone is desperate for his own dance move

I didn’t become a constant Yankees watcher until 2005. If I were at the time of the late-90’s golden age, I would’ve been the biggest El Duque fan — the story of his escape, the charm of his career as the ace of Team Cuba, the craftiness on the mound and, most importantly, the leg kick.

This 1999 Adidas commercial features the clubbers enjoying the trendy dance move, the “El Duque” — basically doing Hernandez’s leg kick and a throwing motion. I don’t think it ever became a real life thing but maybe it could’ve if El Duque ever became a Clayton Kershaw-caliber pitcher. just a fun thought.

The real gem of this video is on David Cone though. The pitcher who was known for his love for nightlife seems just befuddled with everything in this commercial. And towards the end, the reaction he makes after being caught making a (presumably conehead-related) dance move is just priceless.

2. Masahiro Tanaka, in a big Japanese spotlight … as a hitter

Some of you may know that high school baseball is a big deal in Japan. Every year, schools in Japan fight for the much-coveted national Koshien tournament title. To give you an idea on how romanticized it ix, think NCAA March Madness.

In 2006 Koshien, two high schoolers in the finals grabbed national attention — RHP Yuki Saito of Waseda Jitsugyo High and RHP Masahiro Tanaka of Komadai Tomakomai High. The final of the tourney was the one for ages — Saito and Tanaka had a 15-inning duel that ended in a 1-1 draw, prompting a re-match. By the way, Saito threw 178 pitches in the game and Tanaka threw 165 — which is just insane.

Yet, in the next game, which took place the next day, both pitchers dueled again. Saito’s Waseda Jitsugyo held a 4-3 lead in the bottom of 9th inning. With two outs, and the righty an out away from sealing the biggest honor for any high school athlete in Japan, none other than Tanaka stepped up to the plate. You can’t write any sports drama narratives like this.

As you can see from the video, after an intense seven-pitch battle, Saito struck out Tanaka on a 90-mph fastball. The victorious right-hander became a national sensation and was dubbed as the “Handkerchief Prince” for his habit of wiping his face with a blue hanky during the game.

Saito went on to play for the Waseda University and turned pro in 2011. So far, the righty saw his potential squashed by series of injuries, mostly on his shoulder. Also, even though he enjoyed a legendary amateur career, his skillset did not translate over to pros — he had enough stuff to overpower high schoolers and college players, but not much so in NPB. Tanaka, in the other hand, turned pro right after high school and we all know what happened from there.

Venezuela is not exactly known for their soccer prowess — I am a fan of their burgundy jersey (probably because I live in the Redskins country and only thing I like about them is their uniform color scheme) but they have never managed to qualify out of the CONMEBOL group to get to the World Cup finals.

But check out this Venezuelan juggling a ball. This video shown in the Taiwanese broadcast shows Freddy Garcia (who signed with the EDA Rhinos of the Taiwanese league in 2014) show off some good balance. Well, the guy hasn’t had a walk rate higher than 3.0 since 2003 so I guess balance (at least in pitching delivery) isn’t a huge concern for the good ol’ Sweaty Freddy.

4. Bobby Abreu trips getting out of the batter’s box

This happened during a Venezuelan Winter League action. First off, we see the former-MLer Carlos Zambrano pitching. If you spotted Abreu tripping out of the batter’s box from the get-go, great, but you gotta wait till the replay — that’s the REAL gem of the video. Go to 0:35 if you aren’t patient enough. Or, er, look below.

Sometimes I forget that Bobby Abreu with the Yanks for two and half seasons. In 372 games in New York, the man had a 120 OPS+ with a healthy .295/.378/.465 line. Boy, would we love to have a production like that in the lineup for this season.

Back in 2004, when I was psyched to finally get an XBOX system, I went to the nearby Hollywood Video (R.I.P.) and got a copy of ESPN MLB Baseball 2K4, for two reasons: 1) it got good reviews across the board 2) Jason Giambi, the coverboy. Before buying the game, I would go to game websites like IGN and Gamespot to watch the available gameplay and trailers to ready myself and this one is my favorite, by far.

I didn’t notice this bit until I recently revisited the commercial. Check out this screengrab. 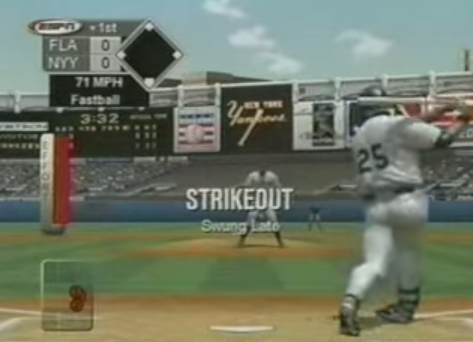 That’s Giambi whiffing on a 71 mph fastball because he’s late, and it was thrown by a Marlins lefty (assumed based on the side of the mound he ends up on) … who threw it on an max effort. I don’t recall any 2004 Marlins junkballer that averaged around mid-to-high-60’s with the fastball. Interesting! (I’m definitely overthinking this one, ignore me!)

Now that it’s 2015 and I don’t really care who’s on the cover, I wish I had gotten MVP Baseball 2004. I got to play it at friend’s place few years later and it was much better.

6. An 8 minute, 11-pitch showdown between Hiroki Kuroda and Hideki Matsui

I have no clue what year this took place — it’s gotta be sometime between 1997 and 2002. Kuroda did not debut into ichi-gun of NPB until 1997 (Matsui had played for the Giants since 1993) and Matsui left Japan for the Yankees after the 2002 season.

What we can see from the video is that it’s the bottom of the 8th, at the Giants home, and there’s a runner on first. Matsui was an established slugger for the Japan’s most popular team so I’d imagine it would take a lot of nerves for anyone to pitch to him in a high-pressure situation like that. Nevertheless, #Hirok gave #Hidek a hell in this at bat, and vice versa.

I’m not going to give a full spoiler to how this at-bat ends, but let me say that it’s quite nasty, in a visually-pleasing way. Just watch.

7. El Duque, back when he was in Cuba with the Havana Industriales. Date unclear

This is a short one but it speaks to me like an interesting vignette. It’s hard to tell when this video is from but the uploader may or may not be the former big leaguer and a fellow Cuban defector Rene Arocha.

I actually remember watching this video back around 2007. I once searched for videos of Betances pitching (because 18-year old 6’9’’ pitching prospects that hit 98 mph are very rare and attractive commodities) and while I managed to find one or two, I also ran into the above one — in which it seems like the tall righty as goofing off with friends from back home. Flash forward to February 2015, while writing this post, I remembered of this video’s existence and searched for it, and thankfully, it is still online! Hallelujah!

Some notable highlights: At around 0:20, Betances starts doing some dance moves on the chair. At 0:54, you can see him do the cha-cha slide (if that doesn’t remind you of the 2000’s, I don’t know what will) while holding a baseball bat like a guitar. At 2:28, Betances takes down a high school mascot and eventually dances with it. And at 2:57, well, this happens:

What can I say? After watching so many strikeout highlights from 2014, watching something like this, being a kid and having no care in the world, is so fun and endearing to see. He may be a strikeout machine on the mound. But this video, to me, is as human as it gets out of any athlete that I’ve revered and rooted for.

When New York drafted Betances in 2006, he was a very raw product. If I recall correctly, he was projected as a first-rounder due to his sky-high upside, but didn’t get picked until the 8th round due to commitment to Vanderbilt (imagine if he pitched in the same rotation as David Price, who went no. 1 overall in 2007). Yanks ended up giving the lanky righty $1 million to turn pro and I remember following his journey through the minors — there were a lot of ups and downs. He had a TJ surgery, then had a beastly 2010 campaign that brought him Josh Beckett comparisons, then he couldn’t find a strike zone in 2012 and almost reached to a failed prospect status. In 2013, he went to bullpen full-time and never looked back. I’m very happy to see him as one of the best relievers in the game, perhaps sharing a closer spot in the team with another 2006 MLB Draft alumnus, Andrew Miller.

2006 was the season that I first cared about the MLB draft and the international free agent signings and boy, Yankees had some haul that year from both: Ian Kennedy, Joba Chamberlain, Jesus Montero, Zach McAllister, George Kontos, Mark Melancon, David Robertson, etc.

Oh, and lastly, if you want to see how much things changed, here’s the video of him pitching from 2006. Gotta say he looks much better nowadays with a more filled-out frame in pinstripes with a less herky-jerky delivery.