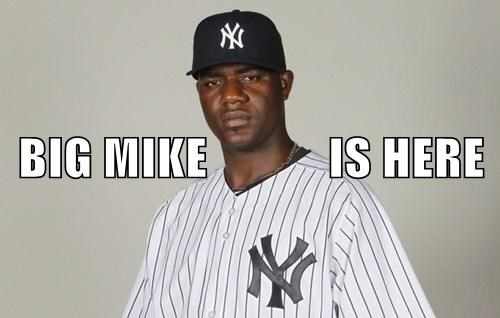 The Yankees finally get to leave Florida tomorrow — they will make a quick one-game stop in Washington to play the Nationals on Saturday before arriving in New York — but they have to play three games before fleeing Tampa, including two this afternoon. Half the team is home in Tampa to play the Pirates and the other half is 45 minutes up the road in Lakeland to play the Tigers. There will be video broadcasts of both games too, so hooray for two Yankees games at the same time!

Reason to watch today’s home game: Big Mike! He’ll be on the mound making his final spring tune-up start. Dellin Betances is also scheduled to pitch and he’s still working through whatever’s been hampering him in camp. Stephen Drew is playing shortstop for the first time this spring — he told reporters yesterday he hasn’t even taken grounders at short, though Brendan Ryan’s calf injury means the Yankees need Drew to be an option there. Also, Alex Rodriguez is starting at first base for the second time this spring. And finally, old buddy A.J. Burnett will be on the bump for the Pirates. It’s already been three years since he was traded away. Time flies.

Here is the starting lineup for the home game against the Buccos:

Reason to watch today’s road game: Didi Gregorius returns to the lineup after missing a few days with a minor wrist sprain. He landed on it awkwardly last week and was able to go through a full workout yesterday with no issues. Some rarely seen minor leaguers are scheduled to come off the bench as well. That’s pretty much it for this game. Here is the starting lineup: