Even with last night’s 0-for-3 with two strikeouts, first base prospect Greg Bird has been very impressive in his short MLB cameo. He had the two-homer game Wednesday and has gone 6-for-21 (.286) with a double, two homers, and a .348 OBP so far. Losing Mark Teixeira to that bone bruise in his shin could have been very bad, even if only for a few days, but Bird has stepped in and helped the offense. It’s been awesome to watch.

Bird had a reputation for being a very disciplined hitter as he came up through the system, and it shows in his career 14.9% walk rate in the minors. Being disciplined isn’t just about drawing walks, however. Walks are a byproduct of being disciplined; the goal is to get into a good hitter’s count first and foremost. Bird showed he’ll swing early in the count if he gets something to hit earlier this week with his first pitch double off Glen Perkins:

“I got ambushed by the first guy,” said Perkins to Mike Berardino after the game. Bird was leading off the inning against a new pitcher, a tough lefty he had never seen before, and taking a pitch to get a feel for the situation would have been easy to understand. Instead he jumped on the first pitch fastball, a very hittable pitch, and sparked the game-winning rally.

Even to my untrained eye, that “slow clock” Girardi spoke about seems pretty obvious. Bird looks very comfortable and very in control at the plate. Lots of rookies come up and start hacking at everything because they so badly want to impress. It’s only natural. Bird has not done that at all. Look at his ninth inning walk last night. Lots of rookies would have come out of their shoes swinging at bad pitches trying to make something happen. Bird appears to be very relaxed at the plate and it shows in the strike zone plot of his swings (via FanGraphs): 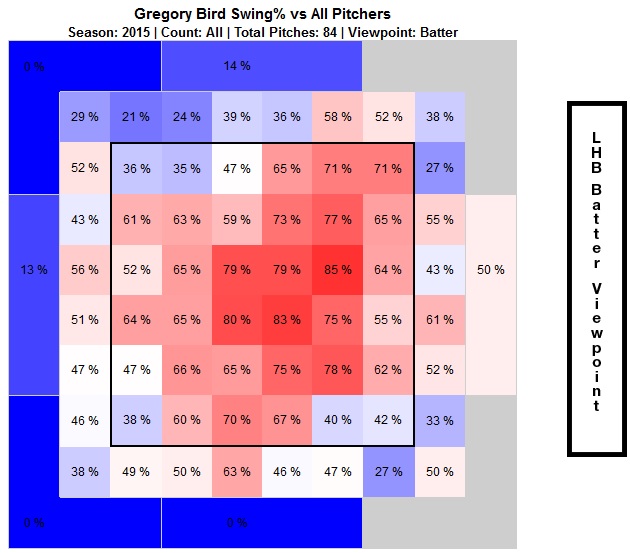 In a nutshell, the brighter the red, the more often Bird has swung at pitches in that location in his brief MLB career. The brighter the blue, the less often he has swung at pitches in that location. Almost all of the red is out over the plate and almost all of the blue is outside the zone. It’s exactly what you want to see, though it rarely happens with a rookie.

In addition to his impressively disciplined approach, Bird has also stood out because he seems to hit the ball really, really hard. His average exit velocity is a healthy 93.2 mph, well above the 88.4 mph league average. Obviously Bird’s number comes in a very small sample, so take it with a grain of salt. Baseball Info Solutions data, which is recorded by human stringers, pegs his hard contact rate at 57.1%. The league average is 28.6%.

Bird has made lots of hard contact early on — I thought it was sorta funny that his first career hit was a dinky little ground ball with eyes after he watched some rockets find gloves in previous days — and the most impressive thing is that he’s consistently hitting the ball in the air. Just three of his 14 balls in play have been ground balls (21.4%). That’s it. This isn’t something new either. Here’s a snippet of Keith Law’s preseason scouting report (subs. req’d), when he ranked Bird as the 81st best prospect in baseball (emphasis mine):

Generally speaking, fly balls are turned into outs more often than ground balls — fly balls have a .073 BABIP this year while grounders are at .243 — but they also go for extra base hits more often. That makes sense intuitively and the numbers back it up: fly balls have a .287 ISO this year while ground balls are at .020. (The only ground balls that go for extra bases are those hit down the line.) We also know the harder you hit the ball, the more likely it is to go for a hit (line drives have a .615 BABIP and .393 ISO!), so Bird’s combination of hard contact and not hitting grounders is one hell of a recipe for doing damage.

Let’s not get ahead of ourselves though. Bird has been in the big leagues for a little more than a week now and that’s nothing. This could all be small sample size noise for all we know. The super early returns do match the scouting reports though, so that’s encouraging, and the combination of plate discipline and hitting the ball hard in the air sure is exciting. Most impressively, Bird looks like he belongs. He has looked very calm and in control at the plate. That’s stood out more than anything.