River Ave. Blues » The real impact of losing Mark Teixeira’s bat
Bailey, Refsnyder, Romine among first wave of September call-ups
Even with no standouts, the revolving door has been an effective last man in the bullpen

The news just keeps getting worse and worse for Mark Teixeira and the Yankees. Joe Girardi announced Monday that Teixeira was sent back to New York for further tests on his badly bruised leg. That means Tuesday night’s matchup with the Red Sox will be the 13th time in 14 games since the injury that the Yankees won’t have their leading home run guy and most explosive power hitter in the starting lineup. Even worse, there is no definitive answer about when, if at all, Teixeira will return. As a wise man once said … 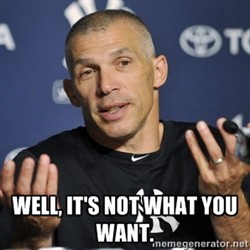 Sure, the home runs and extra-base hits provide a ton of value, but Teixeira’s impact on the Yankees’ offense goes beyond just his ability to hit the ball really far, really high and really hard. It is his outstanding performance in the most high-pressure plate appearances that sets Teixeira apart from the rest of the Yankee hitters — and makes his bat nearly impossible to replace.

There are a few ways we can isolate “high-pressure” situations in a baseball game. First, there is the concept of leverage, which is basically an attempt to quantify how tense and suspenseful any single at-bat is in a game. For example, there is a lot more on the line — in terms of winning or losing — when a batter steps to the plate trailing by a run in the ninth inning with two outs, compared to a similar at-bat in the third inning or if you are ahead by five runs. In high-leverage situations, Teixeira owns a team-best 1.009 OPS and .418 on-base percentage this season.

Need a big hit when the Yankees are leading by one run, tied, or have the potential tying run on base, at bat, or on deck? Teixeira is your man. He is hitting a whopping .311/.436/.600 in those “late and close” plate appearances, ranking first among Yankee regulars in on-base percentage, slugging and OPS for those situations.

In fact, no player on the Yankees has delivered more game-changing hits than Teixeira. When the game is tied, Teixeira has a ridiculous line of .310/.394/.655, good for a 1.049 OPS that is easily the best on the team. And he leads them with 26 hits that either tied the game or given the Yankees the lead this season, including a team-high 15 home runs.

Remember that super-important victory against the Blue Jays on August 15, which guaranteed the Yankees a series win in Toronto? Masahiro Tanaka dominated the headlines with his one-run, complete game gem, but it was Teixeira who came through with the game-winning, go-ahead home run.

He is also what you might call the hitting version of an “ace” for the Yankees, a guy that can step up and stop the bleeding when the team really needs a win. In games following a Yankee loss this season, Teixeira has the highest OPS (.982), slugging percentage (.582) and on-base percentage (.401) on the team, and each of his rate stats are higher in those games than overall this season.

The Yankees have shown this season that they are capable of beating up on bad pitching even without Teixeira (see the 38 runs scored in three games this weekend against the Braves’ staff, which has the fifth-worst ERA in the majors). But in Monday’s loss to the Red Sox — when the Yankees wasted numerous scoring chances and left 14 men on base — we also saw how a Teixeira-less lineup could really hurt the Yankees down the stretch.

As the final month of the season gets underway and the Yankees entrenched in a heated division race with the Blue Jays, the games are only going to get more intense, more stressful and take on even greater importance — the exact situations where they need Teixeira’s clutch bat the most.

Bailey, Refsnyder, Romine among first wave of September call-ups
Even with no standouts, the revolving door has been an effective last man in the bullpen