Evaluating a manager is a very difficult. First and foremost, the most important part of the job happens behind closed doors, in the clubhouse, where 25+ personalities are managed. Secondly, front offices are getting more and more involved in day-to-day decision making. Lineup construction, bullpen usage, stuff like that. Sometimes it can be hard to tell who is really calling the shots.

Joe Girardi just completed his eighth season as Yankees manager — can you believe it’s been eight seasons already? — so by now we’ve been able to pick up on some tendencies. He likes having a designated eighth inning reliever and, when possible, a designated seventh inning reliever too. Having the platoon advantage is important. He goes to great lengths to rest his players, particularly the veteran everyday position players.

Since we’re not in the clubhouse, all we can do is evaluate Girardi’s on-field performance, and even that is tough. He doesn’t swing a bat and he doesn’t throw any pitches. In the end, it’s up to the players to execute. All Girardi can do is put them in the best possible position to succeed. This is baseball. Sometimes you do everything right and it still doesn’t work out. Let’s review the on-field aspect of Girardi’s performance in 2015.

Girardi likes to have designated seventh and eighth inning guys, but has shown he will be flexible when necessary. Dellin Betances appeared in 74 games this season and on 19 occasions he was brought into the game in the seventh inning to put out a fire. Andrew Miller missed a month due to injury and still had four saves of at least four outs, fifth most in baseball.

Here’s a really quick graph plotting Leverage Index against FIP for relievers who threw at least 30 innings in 2015. There were 205 of them. Generally speaking, the best relievers have the lowest FIP, and you want them pitching the most important innings, so they should have a high LI. 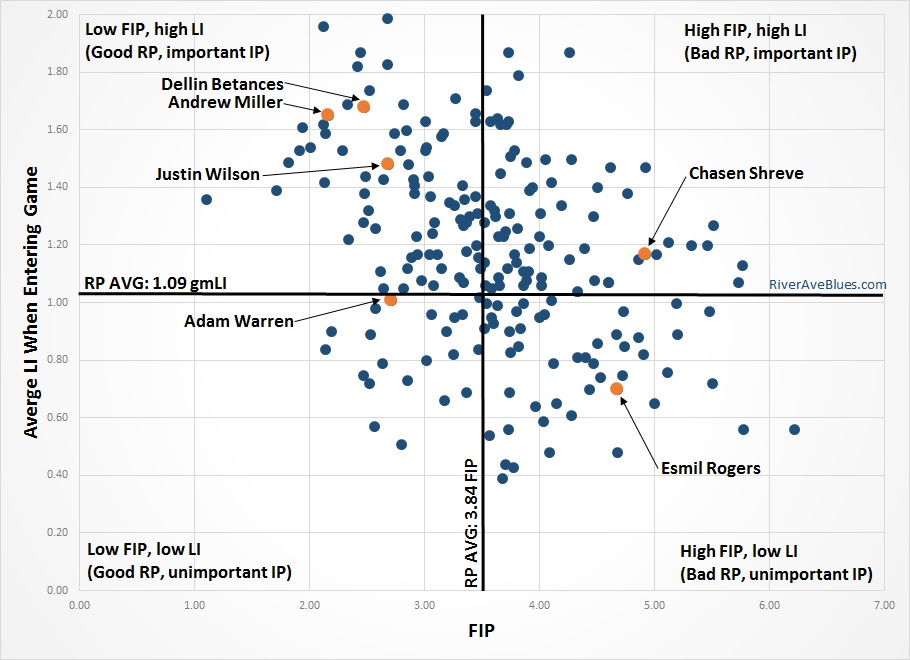 Girardi was very good at using his best relievers — specifically Miller, Betances, and Justin Wilson — in the most important situations this past season. At same time, he used his worst reliever (Esmil Rogers) in the least important innings. That’s how it should work.

Reliever usage is tough to evaluate — we often have no idea who is and who isn’t available on a specific day — but there is evidence Girardi is among the best managers in the game at running a bullpen. Every manager makes questionable decisions from time to time, but Girardi does seem to make less than most. He’s good at using the right guy in the right spot.

The Yankees were the only team in baseball to not use a reliever three days in a row this past season. Two days in a row happened all the time, it has to in this day and age, but not a single Yankees reliever pitched three consecutive days at any point in 2015. Not even down the stretch when the team was fighting for a postseason spot..

“It’s the thought process from the beginning (of the year),” said Girardi to reporters in early September. “I don’t throw guys three days in a row. If they’ve thrown three out of four, I don’t throw them another. That’s thought, I think, really hard about that, how we use our relievers and how you keep them healthy during the course of the year.”

Resting relievers is obviously important, and for years Girardi has done an excellent job making sure he doesn’t overwork guys. The only glaring exception is Betances — he’s thrown 18.2 innings more than any reliever the last two seasons — and it’s possible his late-season control problems were the result of all those high-stress innings. Then again, Dellin has a history of control problems, so it wasn’t completely out of the ordinary either.

I think we can all agree Girardi is very good at giving his relievers the appropriate rest. Whether it leads to improved performance — or simply sustained performance later in the season — is another matter. There’s no real way to know that. Girardi is also pretty good at resting his position players, so much so that it might be overkill at times. Then again, he has a veteran team, and they need more rest.

Here’s a stat that blew my mind (that maybe shouldn’t have): the longest streak of consecutive games started in the field by a Yankee this year was 12 by Chase Headley, spanning July 23rd to August 4th. Twelve! Carlos Beltran and Jacoby Ellsbury each started eleven straight games in the field at one point, though Beltran’s streak had an off-day mixed in. (Headley’s streak was 12 starts in 12 days.) No other Yankee started more than nine (!) straight games in the field.

Isn’t that wild? The Red Sox were the only other team in baseball who didn’t have a player start at least 15 straight games in the field at some point this season. (Mookie Betts was their leader at 13.) Part of this is platoons, which we’ll talk about a little more soon, but a lot of this is Girardi’s tendency to rest his regulars. If not once a week, then close to it. Did it help? It’s easy to say no considering the second half offensive collapse, but who’s to say the collapse wouldn’t have started in June without the rest?

Roster construction plays a significant role in this, but ranking top five in plate appearances with the platoon advantage four times in the last five years indicates Girardi is putting his hitters in position to succeed. That’s all he can do. Put guys in spots that optimize their skills. He certainly does that offensively.

On the pitching side, the Yankees had the platoon advantage in 47% of their plate appearances, 12th most in MLB. The league average was 46%, so the Yankees were basically middle of the pack. Last season it was 45% and the year before it was 40%, again right around the league average. I wish there were a way to separate starters from relievers, but there’s not. That would be more instructive.

Anecdotally, Girardi does seem to understand which relievers can face which hitters. Miller and Betances can face anyone, and Wilson and Chasen Shreve were not pigeonholed into left-on-left work. Girardi knew they could get righties out. Maybe Girardi doesn’t deserve much credit here because the Yankees haven’t had a regular reliever with a massive platoon split since Clay Rapada a few years ago. Offensively though, Girardi really maximizes those platoons.

Questionable Decisions in the Second Half

For the most part, the 2015 season was a pretty typical Girardi season from a decision-making standpoint. He did, however, make some curious move down the stretch. Two stand out the most to me. First, Girardi left a struggling Ivan Nova in to face Justin Smoak with the bases loaded and one out in the sixth inning on August 8th. Nova’s pitch count was over 100 and the game was scoreless.

Adam Warren was warming in the bullpen the entire inning and yet Nova was left in to load the bases and give up the grand slam. Two of the first three base-runners reached on walks, including a four-pitch walk to Edwin Encarnacion immediately prior to the grand slam. It was obvious Nova was fatigued, yet Girardi stuck with him even though Warren was ready. Maybe it doesn’t matter in the end, but geez, that was an obviously bad decision at the time.

Then, on September 23rd, Girardi attempted to use James Pazos, Caleb Cotham, and Andrew Bailey to navigate the middle of Toronto’s lineup in the sixth and seventh innings of a scoreless game. It went from 0-0 to 4-0 Blue Jays in the span of nine batters. Wilson and Betances were left sitting in the bullpen waiting for the eighth and ninth innings, which proved to be meaningless. (Miller was unavailable that day.)

That September 23rd game was more or less New York’s last chance to stay in the AL East race. The Yankees went into that game 2.5 games back of Toronto with 12 games to play. A win would have brought them to within 1.5 games of the division, but instead a bunch of September call-ups relievers gave the game away and created a 3.5-game deficit. Girardi didn’t show a whole lot of urgency there.

Those two moments in particular stand out as glaring mistakes and they contributed to the Yankees losing the division, though every manager makes major blunders throughout the season. Girardi has his moments like everyone else. I think he’s a net positive on the field through his bullpen usage and platoon work, and the same was true in 2015. September wasn’t the best month of his Yankees career, but the season overall was strong.