River Ave. Blues » Yankees may be able to improve their offense by swinging at the first pitch more often in 2016
Wednesday Night Open Thread
2016 Preseason Not Top 30 Prospects

Last week was Retro Week here at RAB, and a trademark of that 1996 Yankees team was their relentless offense. That was the trademark of the entire late-90s dynasty, not just the ’96 team. They’d work the count, grind out at-bats, then get into the soft underbelly of the opposing team’s bullpen. It was an incredibly effective strategy. The offense was fun to watch and not fun to face.

Baseball has changed over the last 20 years, and while working counts and grinding out at-bats is never a bat strategy, middle relievers aren’t a bad as they once were. Pitchers are throwing harder than ever before in general, plus teams are matching up more often, so they’re putting their middle relievers in the best position to succeed. Middle relievers now are more effective than they were two decades ago, generally speaking.

That makes sense, right? Hitters swing at the first pitch when they get a really good pitch to hit. Plenty of guys go up to the plate hunting a first pitch fastball or curveball or whatever based on the scouting reports. That’s one of the reasons Brett Gardner’s power has spiked the last few years. He started ambushing first pitch fastballs. And these days pitchers are throwing more first pitch strikes than ever before. Look: 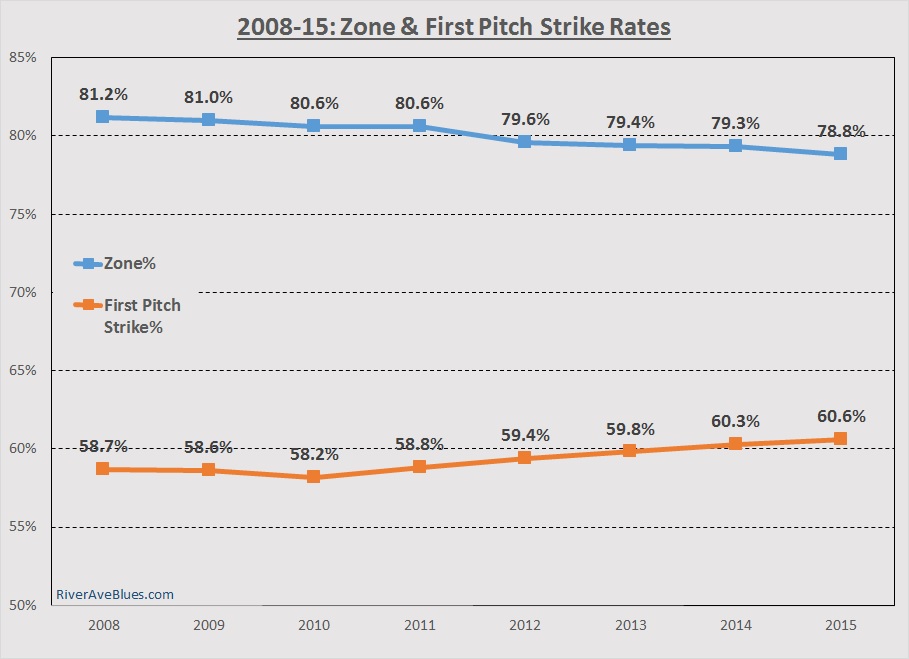 Do you see what’s going on there? Over the last few seasons — this goes back to 2008, the start of the PitchFX era — pitchers are throwing more first pitch strikes but fewer pitches in the zone overall. It’s a trend too. First pitch strike rate and overall zone rate are headed in opposite directions and have for a few seasons now. Chances are the first pitch of the at-bat will be in the zone. After that? The numbers say it is likely to be out of the zone.

PitchFX data says pitchers throw a first pitch fastball roughly two-thirds of the time, and that’s held pretty constant over the years. I actually though it would be higher than that, but two-thirds of the time it is. I’m sure it’s different for each pitcher. Some guys probably throw a ton of pitch fastballs while others pitch backwards with breaking balls. Masahiro Tanaka seems like a guy who throws a lots of first pitch breaking ball, but I digress.

For the sake of having the information readily available, here is how the returning regular Yankees fared when swinging at the first pitch in 2015, via Baseball Reference:

Anyway, hitters generally do much more damage when they swing at pitches in the zone for pretty obvious reasons. When you swing at something out of the zone, you’re either reaching or getting jammed, and it’s tough to drive a ball with authority that way. Last season batters hit .300 with a .202 ISO on pitches in the zone. It was a .188 average and a .075 ISO on pitches out of the zone. So yeah. Swing at stuff in the zone. And based on PitchFX data, the first pitch of the at-bat is much more likely to be in the zone than any other pitch in the at-bat.

Working the count and driving up the pitcher’s pitch count is awesome. The Yankees won a lot of titles doing exactly that. The game is changing though, and getting into the bullpen isn’t as effective as it was 20 years ago, especially in the postseason when teams use only their best relievers. Gardner started hunting first pitch fastballs a few years back and his power output nearly doubled. If the rest of the lineup picks their spots and jumps on the first pitch a little more often, the result could be a nice boost for the offense in 2016.