River Ave. Blues » The Perfectly Adequate Second Base Placeholder [2017 Season Review]
Thoughts before the 2017-18 offseason officially begins
The Yankees and swinging away in 3-0 counts

Way back in April, I sparked a semantics debate as to what the phrase “Starlin Castro is not a very good major league baseball player” meant. It was without a doubt the most intriguing discussion that I have ever witnessed on one of my posts, and it snuck into my mind whenever Castro did something on the far ends of the spectrum from awesome to awful. And, while I severely misjudged the consensus on Castro’s abilities and production, I do think that we can all agree that his 2017 adds another wrinkle to his frustratingly inconsistent career.

For those who believed in Castro, April looked awfully good. He hit .352/.398/.549 with 5 HR in 98 PA, and posted a 7.1% walk rate – comfortably below the league-average of around 8.5%, but well above his career average of 4.8%. He was swinging at just over 47% of pitches overall and about 33% of pitches out of the zone, both of which were his best marks since 2014 (his best offensive season). Castro was also making hard contact on 32% of his batted balls, which would have been a career-high.

Castro’s .386 BABIP was a sign that he would fall back to earth, at least a little bit, but there were positive signs there. He was squaring the ball up more, swinging at fewer pitches (and fewer bad pitches), and the power surge that he showed in 2016 was still there.

More of that Trademark Inconsistency

And then May rolled around. Castro hit .301 in May, which is good; the trouble was that he had a .328 OBP and .416 SLG, which are league-average at face value, but indicative of some backsliding. He also hit just two homers in 119 PA. Castro’s walk rate dropped to 3.4% in May, and his swing rate jumped by over five percentage points. He wasn’t necessarily swinging at balls, as his o-swing percentage remained roughly the same, which is good, and he was still hitting the ball hard – but the rediscovered aggression was not paying dividends.

Castro began turning it around in June, though. The power came back, as he hit another five home runs in 96 PA, and he matched May’s walk total in 23 fewer plate appearances. That’s still just a 4.2% walk rate, but it was good to see him taking a few more pitches.

An Injury-Riddled Second Half

Castro returned on July 15, and looked awful in his first six games back – and he promptly went back to the disabled list with soreness in the same hamstring on July 22. He didn’t return until August 25, and he was said to experience discomfort the rest of the way. Castro did look like the Castro of old down the stretch, for better or worse, batting .283/.324/.409 with 4 HR from that point forward. Whether that was the real Castro or an injury-reduced version of what we saw in the first half is the question that will bother us for the next several months.

I always find it helpful to visualize this sort of thing, so here’s Castro’s rolling wRC+ for the 2017 season: 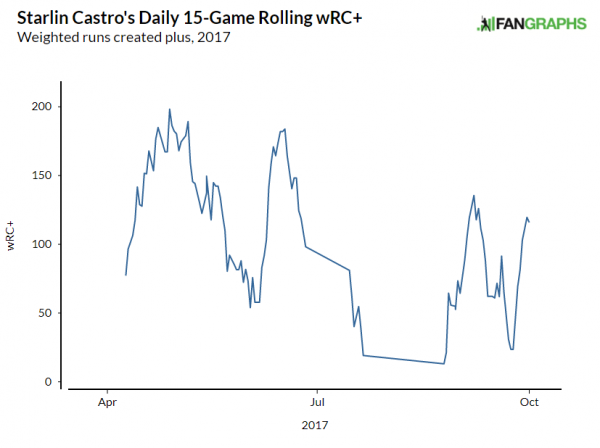 Peaks and valleys are not uncommon in this sort of broad-stroke view of a season, but Castro is (and always has been) an outlier in his own inconsistencies.

Starlin Castro’s overall numbers were good, all things considered. He slashed .300/.338/.454 (110 wRC+) with 16 home runs in 473 PA. Both Baseball-Reference (2.0 WAR) and FanGraphs (1.9 WAR) had him matching his WAR totals from 2015 and 2016 combined last season, as well, which is a testament to how strong his bat was this season; or, alternatively, how middling it was in the two previous seasons. Prorating his WAR to a full 162-game season would leave him right around the 3-win mark, which would have ranked 11th among all second basemen this year.

Castro ranked 11th at his position in wRC+, and was within spitting distance of Robinson Cano (112) for 8th. It’s difficult to compare counting stats, given that he missed fifty games, but he still managed to rank in the top-15 of the position in home runs and RBI.

The worst aspect of his season – aside from the injuries – was his defense. Defensive Runs Saved, Total Zone, and UZR all agree that he backslid this year, and the latter two suggest that he was significantly worse. Some of that may well be explained by his bum hamstring, which clearly limited him over the last month-plus, but he has not taken to the position as well as you’d hope given that he was sliding down the defensive spectrum. To be fair, I don’t think he’s the -13.2 defender that UZR/150 suggests; but he is likely a bit of a liability there.

I would be surprised if Castro was not the starting second baseman for the Yankees on Opening Day. Gleyber Torres is working his way back from an injury, and the team didn’t show much faith in Tyler Wade when he was on the big league roster (though, that may’ve been Joe Girardi’s doing), so the in-house options seem unlikely to press the issue this off-season. And, given that he showed that his power is for real and had the second-best offensive season of his career, Castro is a safe bet to be a solid-average player next year.