The Yankees are 30-9 since that 9-9 start to the season. A lot of those wins were stressful, but tonight’s was relatively nice. The Yanks and Jays were in a total pitching duel until the wheels fell off the home bullpen. CC Sabathia threw one of the best starts of the season and Miguel Andujar and Aaron Hicks each delivered big blows onto the way to the 7-2 victory. Let’s recap this thing.

CC’s still got it

Sabathia didn’t have a great May. In 5 starts last month, he had a 5.92 ERA in 24.1 IP, including 20 ER allowed in the past 18.1 IP. As the calendar page turned though, Sabathia looked pretty good (at least for tonight!).

First off, both starters tonight were pretty effective – and they got it done in different ways. Here is a pitch map from Sabathia… 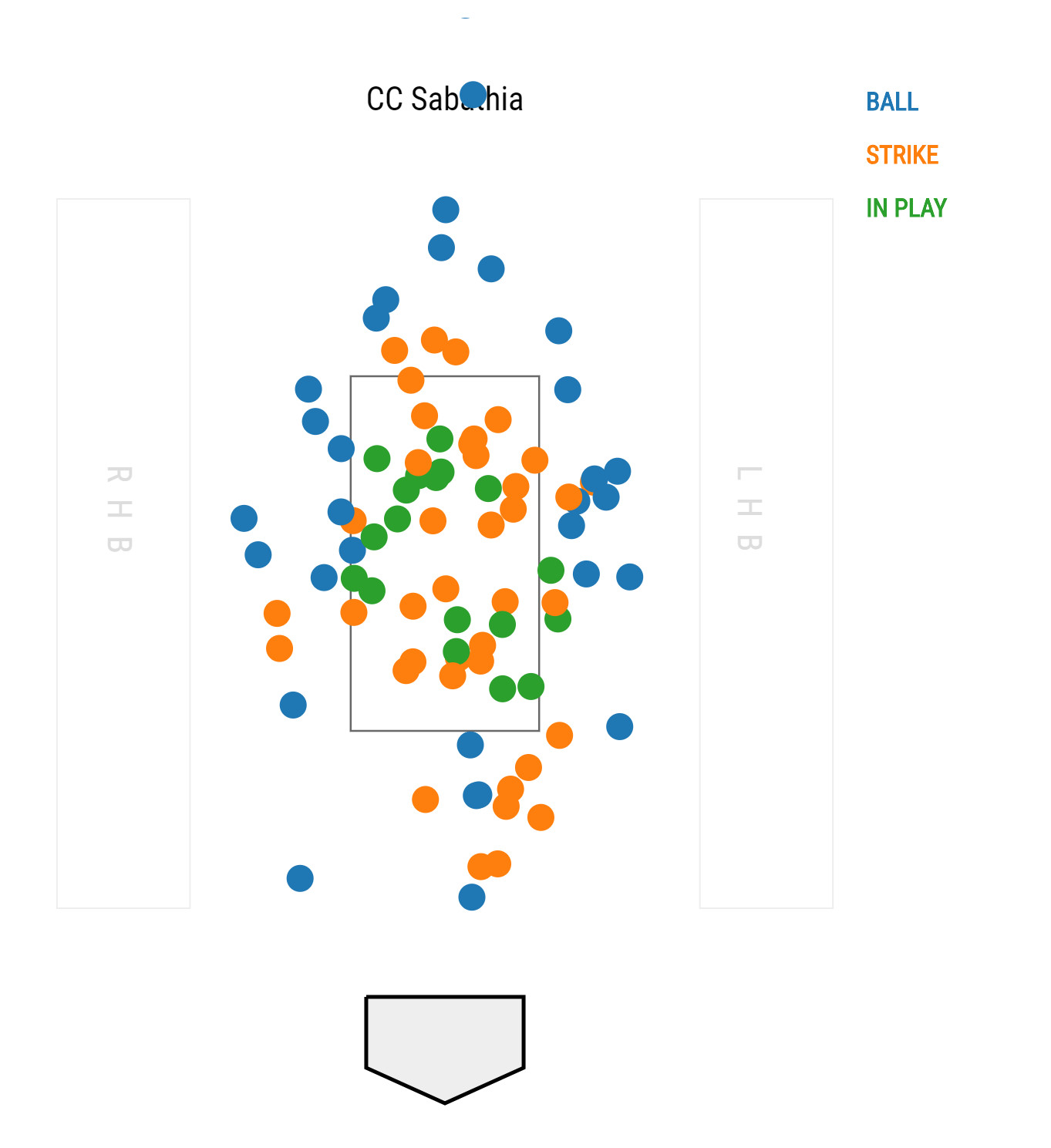 And here is Marco Estrada’s 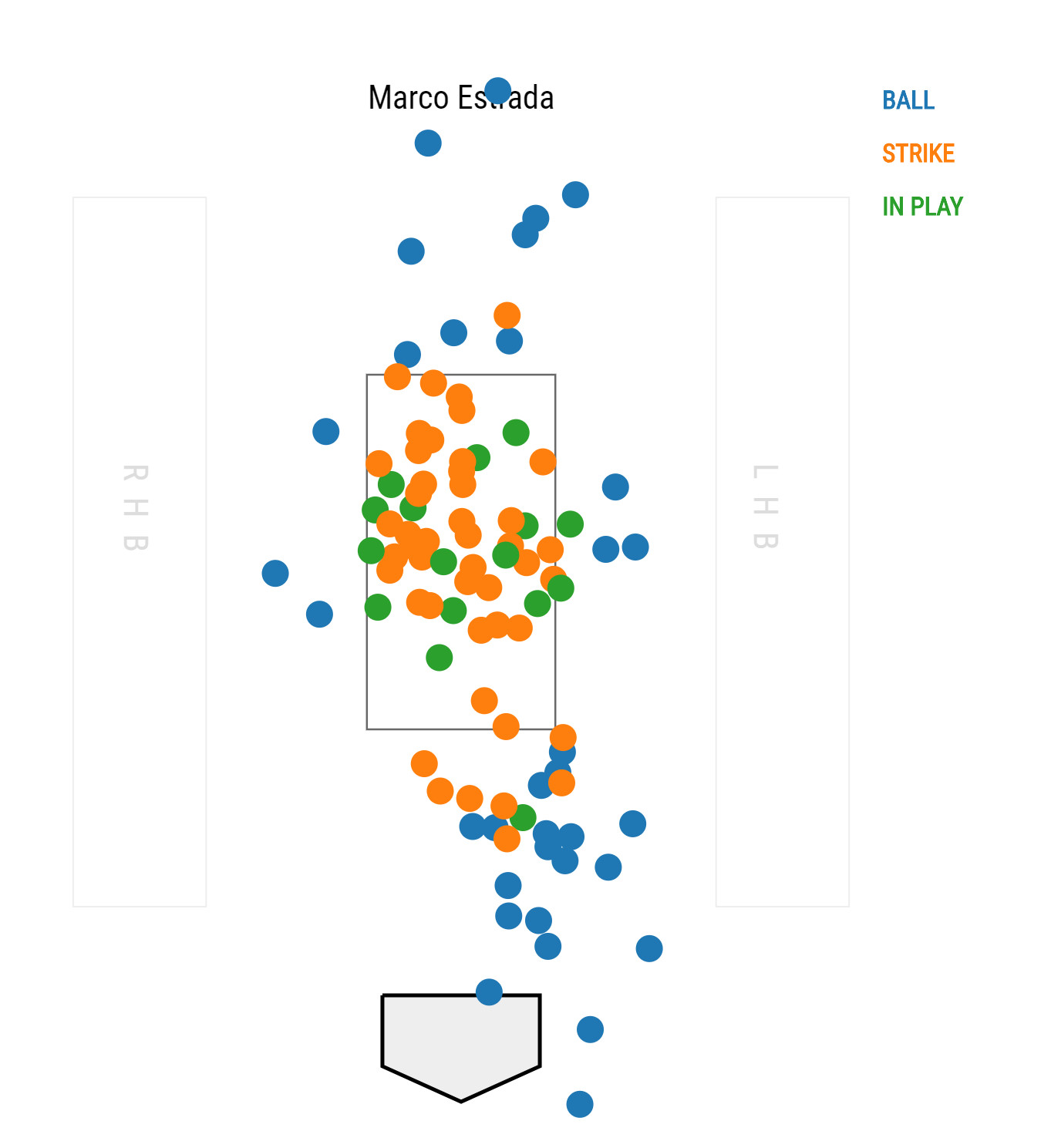 CC’s pitches were more spread out east-and-west through out the zone (and out of the zone) and Estrada’s pitches were more concentrated. Estrada also had a lot of pitches below the zone to lure hitters to whiff on balls below the knees – a classic north-and-south approach. Both pitchers don’t have overpowering stuff so it’s always interesting to see how the work the plate to get the hitters out.

After the scoreless five innings for both teams, the Blue Jays finally scored the game’s first run in the sixth. Teoscar Hernandez hit a high fly ball that just kept on carrying and landed behind the 328 feet wall mark. Statcast had the fly ball at a 17% hit probability (344 feet, 104.0 mph exit velo, 45 launch degree) but it did damage because the ball was pulled just well enough.

After the Yankees took a 4-1 lead, Sabathia gave up another dinger, this time to Kevin Pillar. It was hit better than the Hernandez home run but wasn’t really much of a moonshot either – a 367 footer that went over the left-center wall. CC has given up big flies this season for sure. After tonight, they’ve hit 10 out of the park in 57.2 IP, which is a 1.56 HR/9 IP rate. That doesn’t sound ideal but who says everything is perfect? At the same time, Sabathia gets outs by inducing easy in-play balls (0.069 BABIP against tonight).

All in all – really good outing from the big man (7.0 IP, 3 H, 2 ER, 6 K’s). Two solo homers hurt but not enough tonight. The Blue Jays didn’t touch second or third base aside from the homers all game and we’ll take this outing from Sabathia all day.

The bats were pretty quiet for the first six innings. They had chances, but didn’t capitalize on them. Giancarlo Stanton missed a homer by inches in the first inning, settled for a double, and the following hitters failed to bring him in. Greg Bird led off the fourth with a ground-rule double and they couldn’t bring him in either. The Yankees also had a baserunner caught stealing in each of the fifth and sixth, which is not what you want! At the same time, Estrada’s changeup was killing them, inducing 9 whiffs in 40 counts.

In the seventh, Gary Sanchez led off with a single. Jays manager Gibbons made a bullpen move, swapping Estrada with Seung Hwan Oh. Oh has been serviceable for the Jays this season but man, it was not his best night. He nicked Didi Gregorius on the back foot and walked Hicks to load the bases with Andujar up. Miggy then squared up a hanging slider right down the middle and drive it all the way to the second deck – a 426 feet, no-doubter grand slam, 4-1 Yankees. It’s nice to have game-changing power in the lineup.

The beat went on in the eighth. Stanton and Didi got on base and the Yanks had Aaron Hicks facing Aaron Loup. Hicksy got a fastball up and away in the zone and put it over the right field wall and into the Yankees bullpen (David Robertson, who was warming up, caught the ball like it was nothing). And yep, that pretty much did it for tonight. With another power swing, the Yankees turned a save situation into a comfortable, five-run lead tonight. This team can look hapless at the bat for the first several innings of the game and then make the game out of reach in a hurry with a few swings. Love it. 7-2 was the score after the Hicks dinger, and that’s how it stayed for good.

David Robertson and Chasen Shreve each threw a scoreless, perfect inning to close the game out. The most notable part about the bullpen tonight was how Robertson’s curveball badly fooled Aledmys Diaz for a strike out. The pitch was far in the other batter’s box. 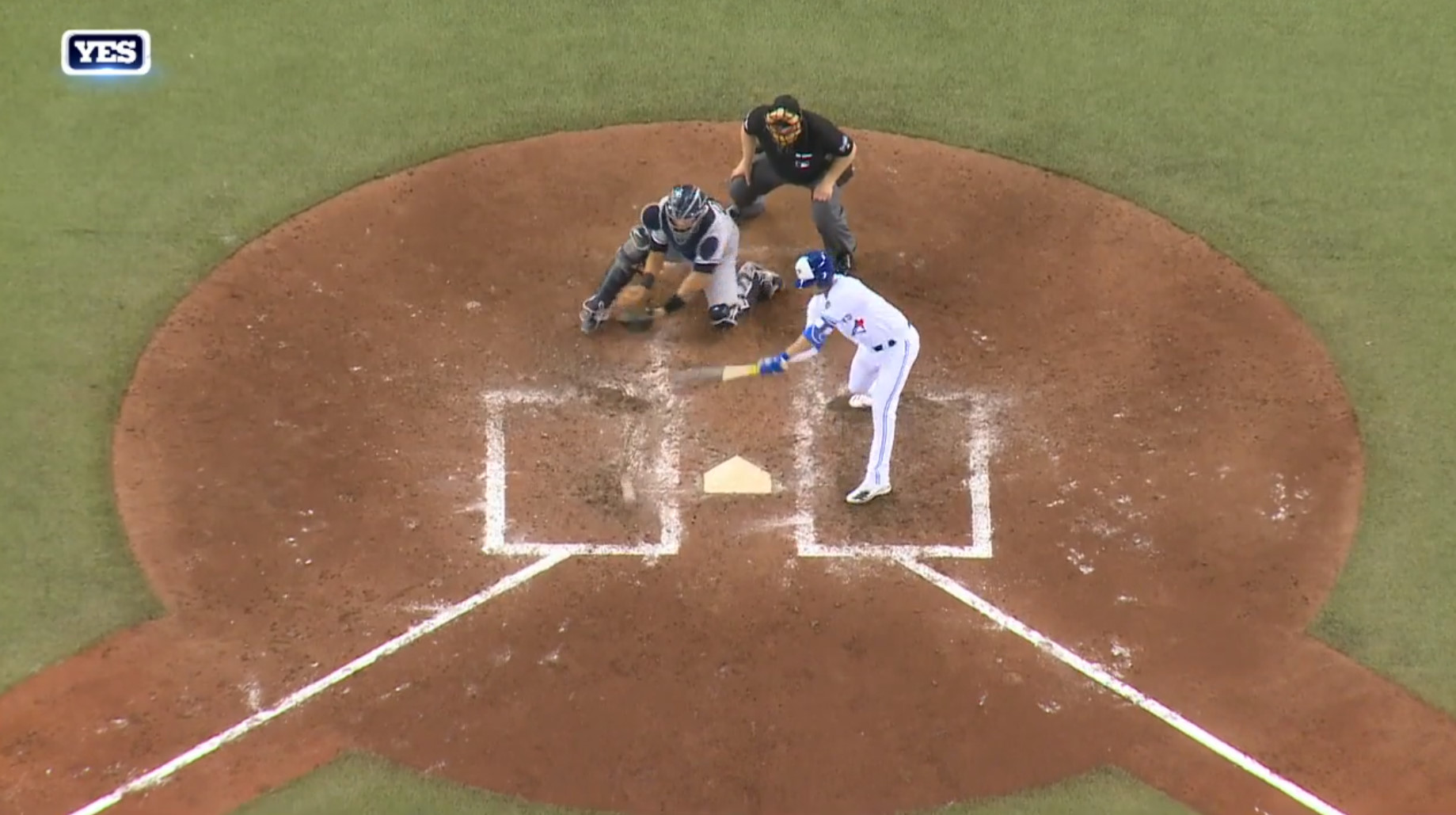 There are whiffs, and there are whiffs like this – probably a combination of Robertson’s curve spinning well and Diaz trying to be aggressive to get the ball in play.

Every starter on lineup besides Gleyber Torres and Gregorius had at least a base hit, even Tyler Austin (which was a grounder up the middle and the first baseman couldn’t handle the throw). Austin has looked pretty lost at the plate. In the past 24 at-bats, Austin is 2-for-24 with *squints eyes* 16 strikeouts. I assume he started tonight at the DH due to his past success against Estrada but didn’t really deliver tonight.

The Yankees are back at it in Toronto tomorrow. Sonny Gray will get the call on a 7:07 pm EST game start against Sam Gaviglio. The next win will be the no. 40 for the season and we’re only in early June!