The Yankees now have 97 wins for the season. That ties 2011 for their most since 2009, and we still have five more games to go. It’s remarkable to think that this could be the winningest team since the latest championship considering not a lot of things clicked in the cylinder this year. Anyways, just like last night, it was a relatively easy one. The offense set the tone in the third by pushing across 7 runs off the Rays bullpen. Luis Severino had a good outing – not necessarily classic Severino one – that gave enough reasons to be optimistic moving forward. The Yankees’ magic number for clinching the home spot for the AL Wild Card game is now at three.

The Yankees pretty much put the game away in the third with a big, seven-run inning against the Rays: 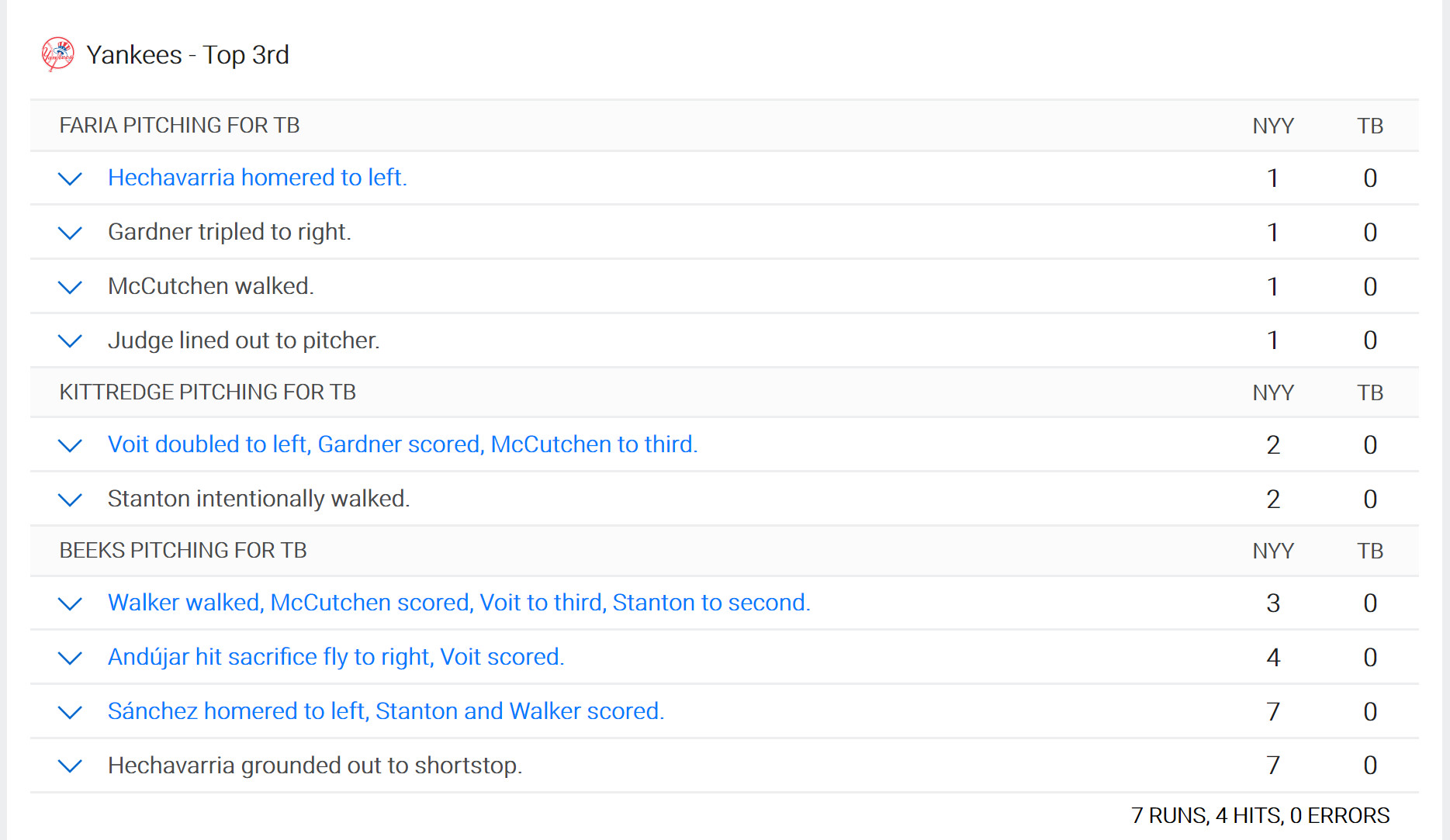 Here are a few notes:

I’ll count this one as a good night for Luis Severino. He had one dicey inning where he allowed two runs (could have been three if it weren’t for the Rays’ blunder decision to send Ji-Man Choi to home that resulted in an easy out) but there were a lot of positives.

Well, a big chunk of that is that he was missing bats. He got 17 whiffs (fourth-highest of the season) out of 97 pitches and got 7 strike outs in 5 innings. Eleven swings and misses were from his heater, which is always a positive. As it is true for many pitchers, Severino needs his fastball to be effective to have a successful outing. Remember when he had a terrible stretch mid-season? His fastball, despite having that velocity, wasn’t really missing bats.

Cause for concern? He did lose the command for a hot second in the third. He started the inning by allowing a double to deep right to Joey Wendle. On the next pitch, Sevy plunked Tommy Pham on the elbow. He followed it up by walking Ji-Man Choi on five pitches. Brandon Lowe, who had a 3-for-3 night, squared up on a fastball middle-middle for a two-RBI double. The Rays gave Yanks a free out by waving Choi home for an easy out. C.J. Cron lined out to Hechavarria for the second out and Kevin Kiermaier grounded out to end the frame. There were some hard-hit balls in the inning and Sevy ran into some luck to close it out, but you do have to consider that even the hot pitchers run into a bad short stretch once in awhile. The rest of the outing was good enough to give Severino some benefit of the doubt.

Even though Severino doesn’t look like his first-half dominant self, there are reasons to believe in him in a postseason start, especially given the turnaround he’s had in his previous seven starts. For the Yankees’ sake, let’s hope it’s a trend.

The rest of the game

The Yankees tacked on two more runs for rest of the night. In the fifth, Stanton led off with a frozen-rope double (112.2 mph) down the left field line. Walker’s ground out advanced him to third but Andujar failed to drive him in by popping out to catcher. Don’t worry, here comes Gary Sanchez. The Yankee catcher pulled a single to left for his fourth RBI of the night. All in all, Sanchez went 2-for-4 with a walk and 4 RBI’s, which is… definitely more like it. Believe it or not, it’s his first game in more than three months in which he drove in more than two runs. Given on the caliber of hitter he can be, that really tells you what kind of year he’s had. I’m not saying it will be, but hopefully, tonight can serve as some kind of turnaround for his season.

In the ninth, Miguel Andujar went deep against our old friend Vidal Nuno. That’s his 26th homer of the year and the kid just continues to rake. After tonight, the Yankee third baseman has a .298/.329/.525 line with 71 total extra base hits. He may win the Rookie of the Year, he may not, but looking at the bigger picture, the Yankee fans got to be excited about how his hitting prowess will develop over the years.

On the pitching side, Tommy Kahnle, Stephen Tarpley and Domingo German kept the Rays scoreless for the last 4 IP of the game. Not the names that Boone would use in close game situations, but he had to feel good after seeing what they offered tonight. It seems that, Tarpley in particular, has impressed Boone enough to consider him in the “conversation” for the postseason roster.

The series continues tomorrow. Masahiro Tanaka will be on the mound against the Rays opener Ryne Stanek. 7:10 pm EST start, so it’s the same drill as today.

Game 157: Six Games to Go
It's official: Yankees will face the A's in the Wild Card Game