Not Yankee related, but exciting nonetheless. The NCAA baseball postseason starts tomorrow night as the double elimination Regionals kick off in 16 college towns across the country. The NCAA postseason is some of the most exciting baseball you can find (the College World Series has been far better than the actual World Series for about 5 years running now), and I can’t possibly recommend spending a two week summer vacation in Omaha for the CWS any more highly. It’s unbelievable (and scorching hot).

The crew over at The College Baseball Blog have done us all a favor and posted previews of each regional, as well as their picks for Omaha. Two-time defending CWS champs Oregon State are left sitting at home this year, thanks to a paultry 11-13 conference record, and 27-24 overall. The team they beat for those two titles, North Carolina, was ranked in the top 5 all year and locked up a top 8 national seed. A bunch of games are going to be on ESPNU, CSN and various FSN channels, and the primo pitching matchups to look out for on Day One are Aaron Crowe (Missouri) vs. Lance Lynn (Ole Miss), and Brian Matusz (San Diego) vs Tyson Ross (Cal.)

Baseball America is having another Bracket Challenge this year, where the winner takes home a rather expensive DeMarini bat and a BA book (there’s a bunch of other prizes as well). If you’re interested you can check out my brackets here. Arizona State has just been too good all year, and I went with the underdog Mizzou as the runner-up because of their Aaron Crowe-Kyle Gibson-Ian Berger rotation. No team in the country can match that.

I know I’ve linked to this clip a billion times before, but I’d be remiss if I didn’t link to it again for all of you that haven’t seen it: here’s current Yankee farmhand JB Cox closing out Texas 2005 CWS Title. Enjoy.

3B Pedro Alvarez, one of if not the best prospect for the 2008 draft, broke a bone in his hand during his first at-bat of the year. He’ll be out at least 6 weeks, which is basically half the college season. The injury unquestionably hurts Alvarez’s draft stock, but will it be enough to get him to the Yanks at #28 overall? I think so. If he comes back and plays like a mere mortal, there will be tons of questions about how bad the injury was, if he’s fully healthy, will it be a long-term thing, etc. Elite players have fallen for far less. The real question is whether or not Alvarez will decide to return to school for his senior year to try and build his stock back up. Even with the potential questions, he’d be a no-brainer at #28.

The Cape Cod Baseball League is “it” for amateurs. Each summer the best of the best college players head up to the Cape to strut their stuff for scouts in anticipation of the following year’s draft, and in some cases they are trying to make themselvesÂ a few extraÂ thousand bucks if they were already drafted. Many players have headed to the Cape with little hype, but left as top notch prospects; just ask Timmy Lincecum what his 0.69 ERA & .104 BAA did for him last year.Â

One player on the Cape looking to drive up his signing bonus is RHP Chris Carpenter, the Yanks’ 18th round pick out of Kent StateÂ in this year’s draft. A second rounder based on talent, Carpenter fell because of signability (as a draft-eligible sophomore, he’s got some extra negotiating leverage) andÂ health concerns (Tommy John surgery and a separate elbow surgery to clean out scar tissue in recent years). In two starts for the Chatham A’s, CarpenterÂ has goneÂ 9 IP, 7 H, 2 ER, 4 BB, 13 K, which isn’t as great as it may look when youÂ consider that the CCBL is quite possibly the pitcher friendliest baseball league on the planet.

END_OF_DOCUMENT_TOKEN_TO_BE_REPLACED

Yes, I know this is a Yankees blog, but we’re not just Yankee fans here at RAB, we’re baseball fans (well, at least I am), and you’d be hard pressed to find a better brand of the game than in Omaha. The players aren’t a bunchÂ ofÂ egomaniac millionaires who think all of humanity owes them something; they’re a group of guys trying to achieve a commonÂ goal while inÂ a key phase of life. There’s no pay check to play for, in factÂ many ofÂ the playersÂ are paying out of their pocket to play (NCAA limits the number of scholarships available for baseball to 11.7 per year, compared to 15 for women’s basketball and 85 for football).

Quick note -Â if you’ve ever wondered why so many high school kids drafted in the lower rounds of the draft sign pro contracts instead of going to school, remember the scholarship bit – some families just don’t have the means to send their kid to school if he doesn’t get a scholarship.

END_OF_DOCUMENT_TOKEN_TO_BE_REPLACED 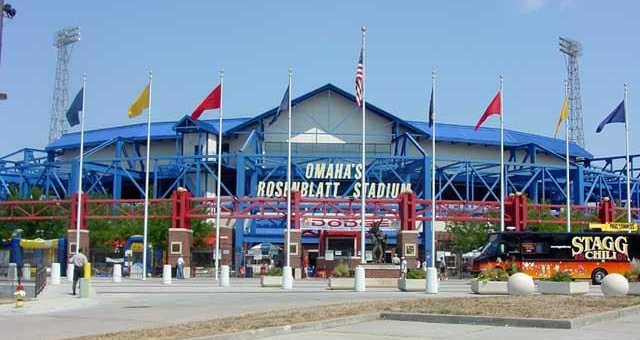 END_OF_DOCUMENT_TOKEN_TO_BE_REPLACED

We’re still waiting on the winner of the Michigan-Oregon State Super Regional, which was delayed due toÂ rain (rain in Oregon? You don’t say…), but otherwiseÂ 7 of the field of 8 is setÂ forÂ Omaha: Arizona State, Cal StateÂ Fullerton, Louisville, Mississippi State, Rice, UC Irvine andÂ UNC.Â Oregon State leads their best-of-3 series 1-0 after the toughest of tough luck losses for Wolverine ace Zach Putnam, and will resume action with Game 2 today (Game 3 is tomorrow if needed).

I’m just not sure who to pick here. Rice seems like a good bet to make a run, but their pitching isn’t all that great right now, and “moment of truth” guy Cole St. Clair has been merely good, notÂ lights out like before his shoulder injury. Louisville’s got some serious momentum (they obliterated Oklahoma State 20-2 in the Super Regional finale) and the underdog tag working in their favor, but I can’t see this team going the distance; there’sÂ just not enough experience, especially with a first year coach. Miss. State will probably go 2-and-out in the double elimination tourney,Â and I’d say the same for Fullerton, but I think they’ll squeeze out a win in whatever game Wes Roemer pitches.

I’m not sleeping on UC Irvine, they’ve got some fantastic pitching, but no experience in Omaha, which is a great separator of pretenders and contenders. Arizona State could make a deep run, but if they run into aÂ couple of good arms they’ll be toast; that team wins 95% of the time by bludgeoning sub-par pitching. UNC is probably best suited to make a run, it’s essentially the same team as last year, with Alex White and Luke Putkonen more than just filling in forÂ the departed Andrew Miller and Dan Bard. Plus de facto aceÂ Rob Woodard just does not lose, dude’s 33-5 in his college career.Â

Okay, so my official pick is UNC sweepingÂ UC Irvine in the Championship series. Here’s the updated brackets, and for the record, only 3 of my picks for the field of 8 made it.

Dude goes into Corvallis and no-hits the defending National Champs for 8+ innings before a walk, sac bunt and single gives Oregon State a 1-0 lead in the top of the 9th.

Michigan is considered the home team because of record, but the matchup is taking place in Oregon State’s turf because theÂ Wolverine’s Athletic Director didn’t submit a bid to host a Regional. Let’s see if Putnam’s teammates can bail him out in the bottom of the 9th against Joe Paterson, the Beaver’s #2 starter who came out of the ‘pen in the 8th…

Update: After getting a quick GB out and giving up a single, Paterson is relieved by Eddie Kunz, one of the nation’s top closers. Because he was also serving as Michigan’s DH, Putnam came up representing the winning run … and promptly grounded out to short on the first pitch. Kunz gets another grounder from the next guy to end the game, and givesÂ OSUÂ a 1-0 lead in the best of 3 series. Talk about a tough loss for Putnam.

This is what baseball is about, not all that soap opera WWF bullshit that the media has made it.