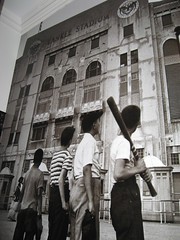 On Friday, I dropped in a short post about the current exhibit on New York baseball history at the Museum of the City of New York. The exhibit runs through Monday, and if you’re looking for something to do over the next few days, I strongly recommend it.

But for those of you in not in the New York area or with no free time this weekend, worry not: I snapped a whole bunch of pictures at the exhibit of some of what I thought to be the more interesting sights. At left is a photo from the 1950s of a group of kids posed outside of Yankee Stadium. It’s a great shot of the exterior of the stadium before the renovations in the 1970s robbed the Stadium of that history. The new stadium — I’ll post photos of that next week — restores an entryway reminiscent of the original Yankee Stadium.

But what else can you see at the exhibit? Take a look. All links open the images in new windows:

If you can make it up to 103rd and Fifth for an hour or two tomorrow or Monday, check it out. The Glory Days of New York Baseball will be gone soon.

In the back of my mind, something about Mariano Rivera’s recent comments about his contract bugged me, and I couldn’t quite put my finger on it. But this morning, it dawned on me that Rivera has changed his position a bit on the Yankees over the last few years.

Three years ago, when he negotiated his current contract extension, Mariano Rivera had nothing but praise for the Yankees. In this article in The Times from 2004, Rivera expressed his desires to remain in pinstripes. ”I don’t need to [be a free agent],” he said. ”This is where my house is. I’d have to find another house. This has been home.”

This wasn’t the first time Rivera had expressed these feelings. In 2001, he basically said the same thing, and in both 2001 and 2004, he hinted that he would probably pitch only until 2007. Well, 2007 has finally rolled around, and Rivera is feeling restless. He is, for the first time in his career, inching toward free agency, and numerous other teams could use a Mariano Rivera in their bullpen. As Buster Olney might opine, Mariano Rivera is a good fit for many, many teams.

So I wonder what’s changed in three years. It’s possible that Rivera is using his own impending free agency as leverage to help Joe Torre. Rivera could have no intention of leaving the Yankees, the organization he’s been with since 1990. Or it could be something else.

Maybe Mo is tired of the speculation surrounding his effectiveness and his elbow. Maybe he’s tired of the three-ring circus in the Bronx. Maybe he was dismayed to see his friend Bernie Williams so unceremoniously dumped last year and wants the team to recognize and honor those who have contributed for a decade or more to a great run.

Either way, something about the Yankees has affected Rivera since he last re-upped with the team. Hopefully, that something won’t be a deal-breaker this time around.

I solemnly swear to utter only good words about Mike Mussina in this post.

After 24 hours of bashing the man, I need to make it up to him. For all the grief I’ve given Mussina today here and here, Mussina deserves recognition and praise for the 209 starts he’s made for the Yankees. In that process, he’s won 100 regular season games and has lost just 62. He’s also thrown some very memorable playoff games as well.

So in recognition of a pitcher who’s been a steady presence on the Yankees since 2001, let’s look at Mike Mussina’s five best games in pinstripes.

END_OF_DOCUMENT_TOKEN_TO_BE_REPLACED Beloved Yankee great and former announcer Phil Rizzuto passed away today. The Scooter, the oldest living Hall of Famer, was 89.

Rizzuto was long a favorite in the Bronx. A 40-year veteran of the broadcast booth, he coined the catch phrase “Holy Cow!” during his colorful commentaries on the game. During broadcasts, he would describe the action in a ramblingly poetic style often discussing marriages and birthdays more than the play on the field. He would leave games early to beat the traffic, saying to his wife over the air, “I’ll be home soon, Cora.” Generations of Yankee fans came to know and love the game through the Scooter’s broadcasts.

On the field, Rizzuto’s thirteen-year career – interrupted by three years in the war from 1943-1945 – earned him a spot in Cooperstown. A five-time All Star, he won the MVP in 1950 and finished second in the voting in 1949. He played in nine World Series, winning seven of them and remained a part of the Yankee family long after he retired in 1956.

Phil also gained some fame, amusingly enough, in 1977 when he appeared on the Meatloaf hit single “Paradise by the Dashboard Light.” As Meatloaf and Ellen Foley recall the tango of their teenage days by the like, Rizzuto’s announcing serves as the not-so-veiled euphemism for the action in the car. This part of the song ends, fittingly enough, with a well-timed “Holy Cow!”

Recently, Rizzuto’s health had been failing. He was noticeably absent from Old Timers’ Day, sending a letter for Michael Kay to read in his place. The flags will be at half staff in the Bronx today as the Yanks are sure to honor Number 10 before tonight’s game. This one’s for you, Scooter. 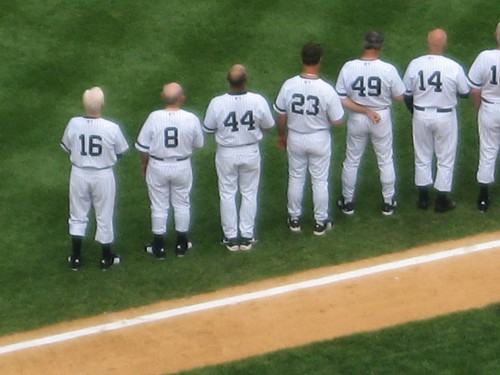 On Saturday, Joe and I went to Old Timers’ Day. While the Yanks lost an uninspiring game in 13 innings, the Old Timers’ Day festivities were entraining. Scott Brosius and Paul O’Neill, reminders of the glory days (as Bruce sang over the loud speaker), made their Old Timers’ Day debuts. During the introductions, I snapped a full flickr photo set.

The day was filled with fond memories of Yankee past. Five of the Old Timers – Jim Leyritz, Darryl Strawberry, Homer Bush, Brosius and O’Neill – were younger than the Yanks’ starting pitcher that day. With John Sterling and Michael Kay emcee-ing, the Yankees honored the 1977 World Series team.

Mike Pagliarulo, a terrible player but fan favorite, showed up. Scott Brosius looked happy to be back. And Paul O’Neill got the biggest ovation of the day.

Bobby Murcer got a big round and looked frail compared to the other Yankees. And Reggie looked very much the part of Reggie.

So for more shots of the game and the players, click here. Good times all around.